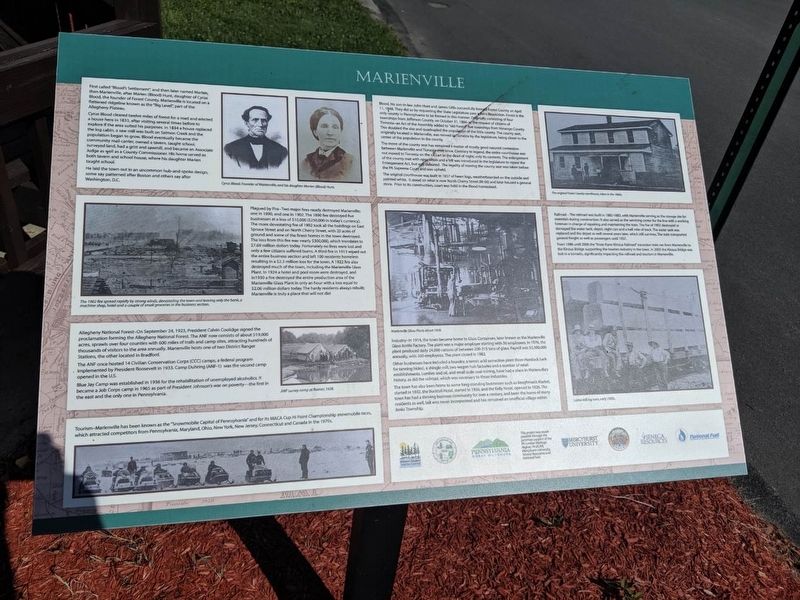 Top Left
First called "Blood's Settlement", and then later Marien, then Marienville, after Marien (Blood) Hunt, daughter of Cyrus Blood, the founder of Forest County. Marienville is located on a flattened ridgeline known as the "Big Level", part of the Allegheny Plateau.
Cyrus Blood cleared twelve miles of forest for a road and erected a house here in 1833, after visiting several times before to explore if the area suited his purposes. In 1834 a house replaced the log cabin, a saw mill was built on Salmon Creek and the population began to grow. Blood eventually became the community mail carrier, owned a tavern, taught school, surveyed land, had a grist and sawmill, and became an Associate Judge as well as a County Commissioner. His home served as both tavern and school house, where his daughter Marien taught school.
He laid the town out in an uncommon hub-and-spoke design, some say patterned after Boston and some say after Washington, D.C.

Top Center
Blood, his son-in-law John Hunt and James Gillis successfully formed Forest County on April 11, 1848. They did so by requesting the State Legislature 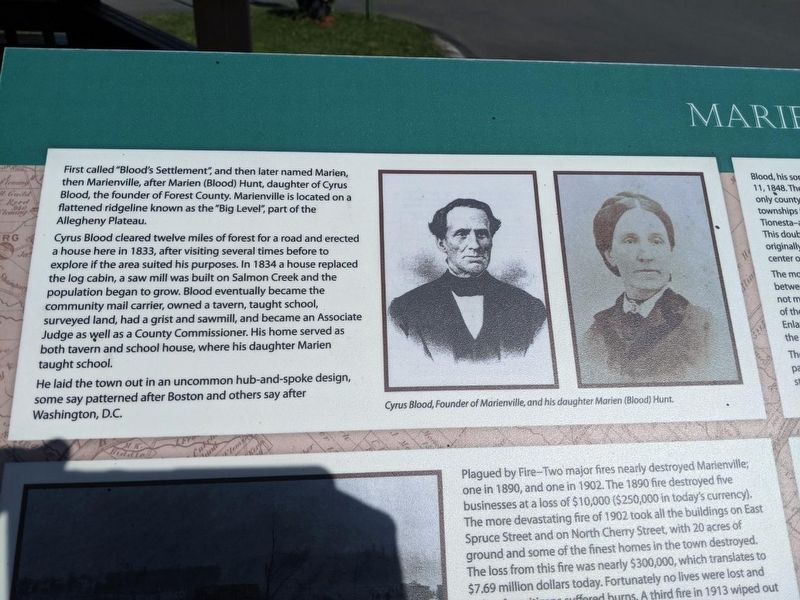 Click or scan to see
this page online
pass a Joint Resolution. Forest is the only county in Pennsylvania to be formed in this manner. Originally consisting of four townships from Jefferson County, on October 31, 1866-at the request of citizens of Tionesta-an Act of the Assembly added to "old Forest" five townships from Venango County. This doubled the size and quadrupled the population of the little county. The county seat, originally located in Marienville, was moved to Tionesta by the legislature, being closer to the center of the population in the county.
The move of the county seat has remained a matter of mostly good natured contention between Marienville and Tionesta ever since. Contrary to legend, the entire courthouse was not moved to Tionesta on the ox cart in the dead of night; only its contents. The enlargement of the county met with opposition and a bill was introduced in the legislature to repeal the Enlargement Act, but was defeated. The legality of moving the county seat was taken before the PA Supreme Court and was upheld.
The original courthouse was built in 1857 of hewn logs, weatherboarded on the outside and painted white. It stood on what is now North Cherry Street (Rt 66) and later housed a general store. Prior to its construction, court was held in the Blood homestead.

Center Left
Plagued by Fire-Two major fires nearly destroyed Marienville; one in 1890, and one 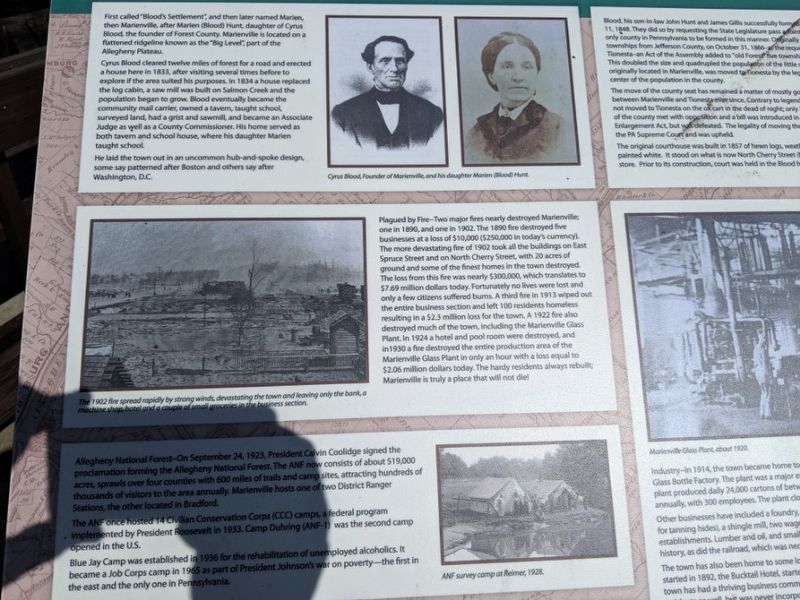 Photographed By Mike Wintermantel
3. Marienville Marker
Left Center panel
in 1902. The 1890 fire destroyed five businesses at a loss of $10,000 ($250,000 in today's currency). The more devastating fire of 1902 took all the buildings on East Spruce Street and on North Cherry Street, with 20 acres of ground and some of the finest homes in the town destroyed. The loss from this fire was nearly $300,000, which translates to $7.69 million today. Fortunately no lives were lost and only a few citizens suffered burns. A third fire in 1913 wiped out the entire business section and left 100 residents homeless resulting in $2.3 million loss for the town. A 1922 fire also destroyed much of the town, including the Marienville Glass Plant. In 1924 a hotel and pool room were destroyed, and in 1930 a fire destroyed the entire production area of the Marienville Glass Plant in only an hour with a loss equal to $2.06 million dollars today. The hardy residents always rebuilt; Marienville is truly a place that will not die!

Second Center Left
Allegheny National Forest - On September 24, 1923, President Calvin Coolidge signed the proclamation forming the Allegheny National Forest. The ANF now consists of about 519,000 acres, sprawls over four counties with 600 miles of trails and camp sites, attracting hundreds of thousands of visitors to the area annually. Marienville hosts one of two District Ranger Stations, the other located in Bradford.
The 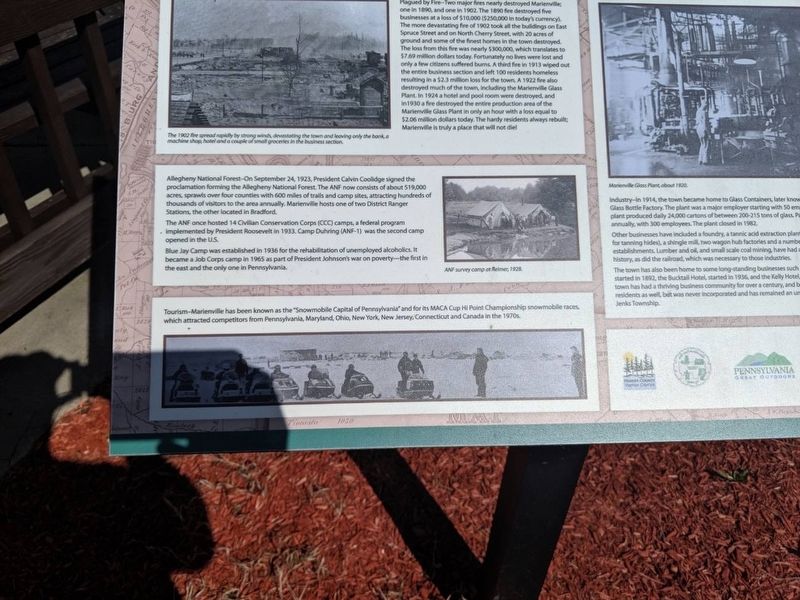 Photographed By Mike Wintermantel
4. Marienville Marker
Bottom Left panel
ANF once hosted 14 Civilian Conservation Corps (CCC) camps, a federal program implemented by President Roosevelt in 1933. Camp Duhring (ANF-1) was the second camp opened in the U.S.
Blue Jay Camp was established in 1936 for the rehabilitation of unemployed alcoholics. It became a Job Corps camp in 1965 as part of President Johnson's war on poverty-the first in the east and the only one in Pennsylvania.

Bottom Left
Tourism - Marienville has been known as the "Snowmobile Capital of Pennsylvania" and for its MACA Cup Hi Point Championship snowmobile races, which attracted competitors from Pennsylvania, Maryland, Ohio, New York, New Jersey, Connecticut and Canada in the 1970s.

Bottom Center
Industry - In 1914, the town became home to Glass Containers, later known as the Marienville Glass Bottle Factory. The plant was a major employer starting with 50 employees. In 1976, the plant produced daily 24,000 cartons of between 200-215 tons of glass. Payroll was $2,500,000 annually, with 300 employees. The plant closed in 1982.
Other businesses have included a foundry, a tannic acid extraction plant (from Hemlock bark for tanning hides), a shingle mill, two wagon hub factories and a number of retail establishments. Lumber and oil, and small scale coal mining, have had a place in Marienville's history, as did the railroad, which was necessary 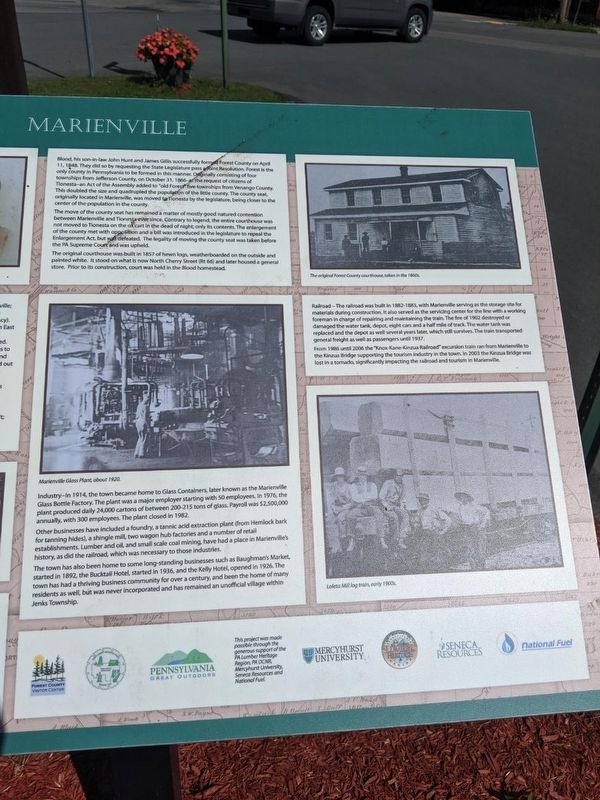 Photographed By Mike Wintermantel
5. Marienville Marker
Right panels
to those industries.
The town has also been home to some long-standing businesses such as Baughman's Market, started in 1892, the Bucktail Hotel, started in 1936, and the Kelly Hotel, opened in 1926. The town has had a thriving business community for over a century, and been the home of many residents as well, but was never incorporated and has remained an unofficial village within Jenks Township.

Right Center
Railroad - The railroad was built in 1882-1883, with Marienville serving as the storage site for materials during construction. It also served as the servicing center for the line with a working foreman in charge of repairing and maintaining the train. The fire of 1902 destroyed or damaged the water tank, depot, eight cars and a half mile of track. The water tank was replaced and the depot as well several years later, which still survives. The train transported general freight as well as passengers until 1937.
From 1986 until 2006 the "Knox-Kane-Kinzua Railroad" excursion train ran from Marienville to the Kinzua Bridge supporting the tourism industry in the town. In 2003 the Kinzua Bridge was lost in a tornado, significantly impacting the railroad and tourism in Marienville. 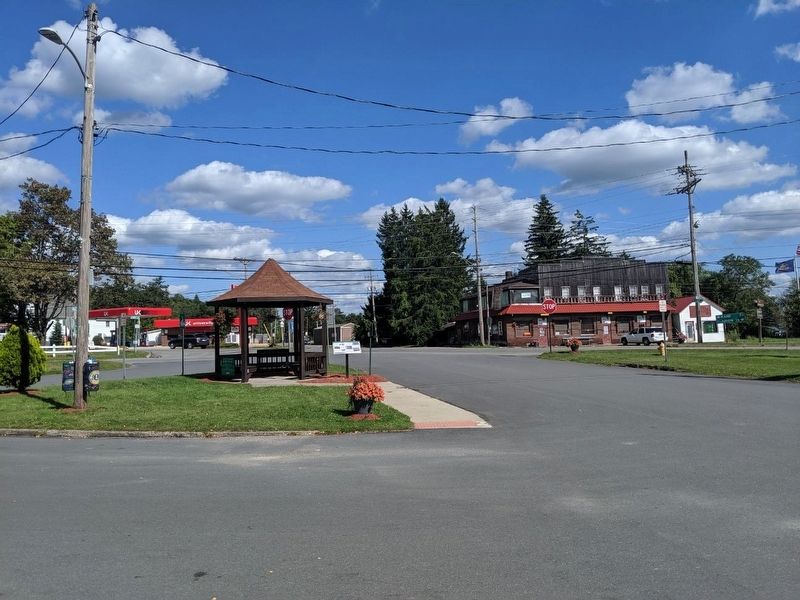 Location. 41° 28.157′ N, 79° 7.429′ W. Marker is in Marienville, Pennsylvania, in Forest County. Marker can be reached from the intersection of Chestnut Street (Pennsylvania Route 66) and West Spruce Street. Touch for map. Marker is in this post office area: Marienville PA 16239, United States of America. Touch for directions.

Other nearby markers. At least 2 other markers are within 17 miles of this marker, measured as the crow flies. Pigeon (approx. 5.2 miles away); Helen Furnace (approx. 16.1 miles away).