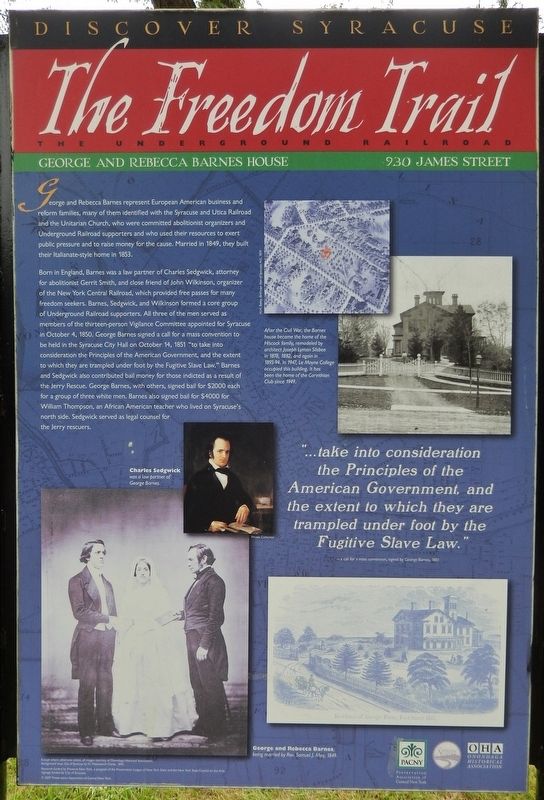 ” …take into consideration the Principles of the American Government, and the extent to which they are trampled under foot by the Fugitive Slave Law.”
—a call for a mass convention, signed by George Barnes, 1851

George and Rebecca Barnes represent European American business and reform families, many of them identified with the Syracuse and Utica Railroad and the Unitarian Church, who were committed abolitionist organizers and Underground Railroad supporters and who used their resources to exert public pressure and to raise money for the cause. Married in 1849, they built their Italianate-style home in 1853.

Born in England, Barnes was a law partner of Charles Sedgwick, attorney for abolitionist Gerrit Smith, and close friend of John Wilkinson, organizer of the New York Central Railroad, which provided free passes for many freedom seekers. Barnes, Sedgwick, and Wilkinson formed a core group of Underground Railroad supporters. All three of the men served as members of the thirteen-person Vigilance Committee appointed for Syracuse in October 4, 1850. George Barnes signed a call for a mass convention to be held 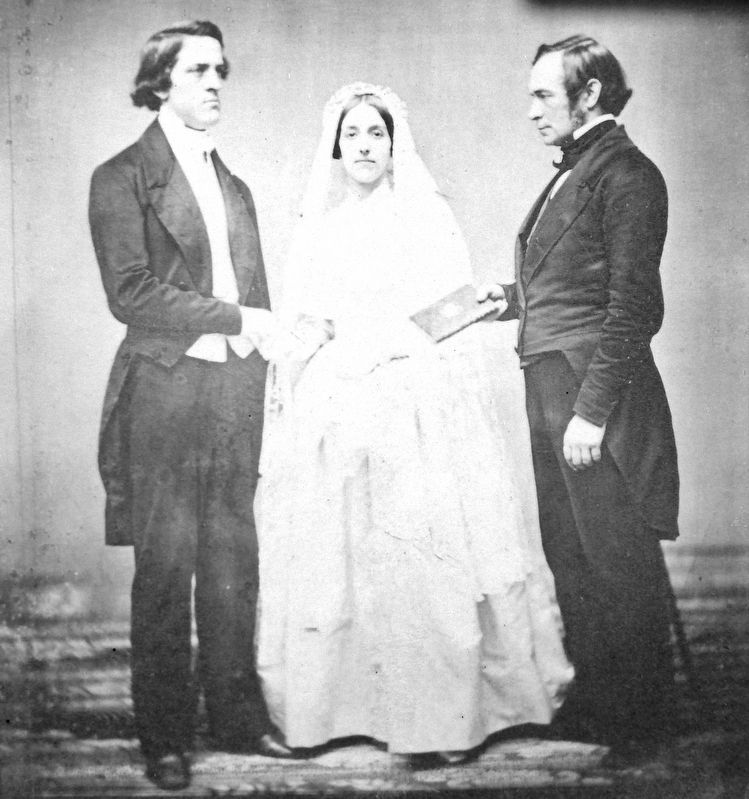 Click or scan to see
this page online
in the Syracuse City Hall on October 14, 1851 "to take into consideration the Principles of the American Government, and the extent to which they are trampled under foot by the Fugitive Slave Law." Barnes and Sedgwick also contributed bail money for those indicted as a result of the Jerry Rescue. George Barnes, with others, signed bail for $2000 each for a group of three white men. Barnes also signed bail for $4000 for William Thompson, an African American teacher who lived on Syracuse's north side. Sedgwick served as legal counsel for the Jerry rescuers.

Topics and series. This historical marker is listed in these topic lists: Abolition & Underground RR • African Americans • Civil Rights. In addition, it is included in the Unitarian Universalism (UUism) series list. A significant historical year for this entry is 1851.

Location. 43° 3.461′ N, 76° 8.243′ W. Marker is in Syracuse, New York, in Onondaga County. Marker is on James Street (New York State Route 290) 0.1 miles east of Highland Street, on the right when traveling east. Marker is located beside the sidewalk, directly in front of the Barnes House. Touch for map. Marker is at or near this postal address: 930 James Street, Syracuse NY 13203, United States of America. Touch for directions. 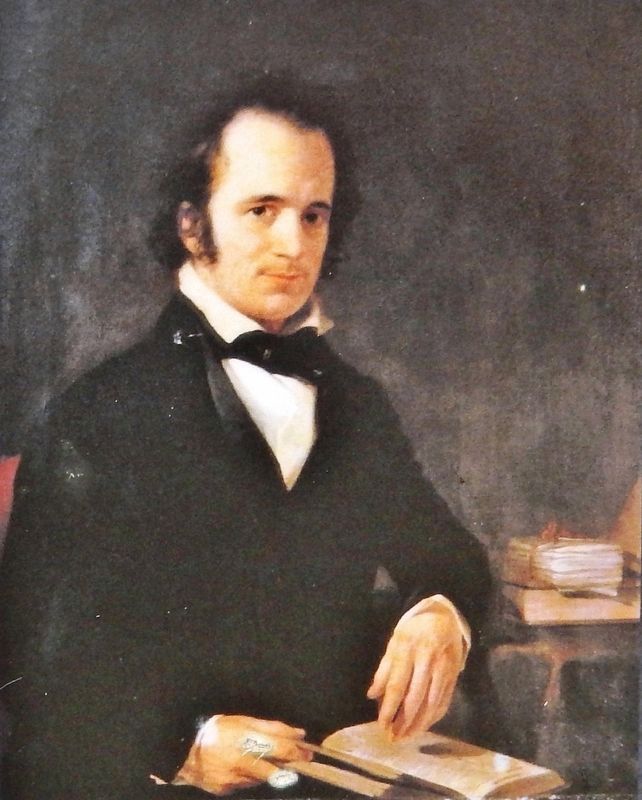 Related markers. Click here for a list of markers that are related to this marker. Syracuse Freedom Trail & Underground Railroad

Also see . . .
1. George and Rebecca Barnes Home. In succeeding years, George Barnes continued his anti-slavery work. Local tradition suggests that the family held anti-slavery meetings in their library. In March 1854, he signed a call for a meeting to support the rescue of a freedom seeker in Milwaukee, Wisconsin. In April 1854, he was one of the Directors of a newly-formed City Anti-Slavery Society. The following July, he was one of several hundred Syracuse men to issue a call for a convention to appoint local delegates to a state-wide convention opposed to the Kansas-Nebraska Act. (Submitted on September 4, 2019, by Cosmos Mariner of Cape Canaveral, Florida.) 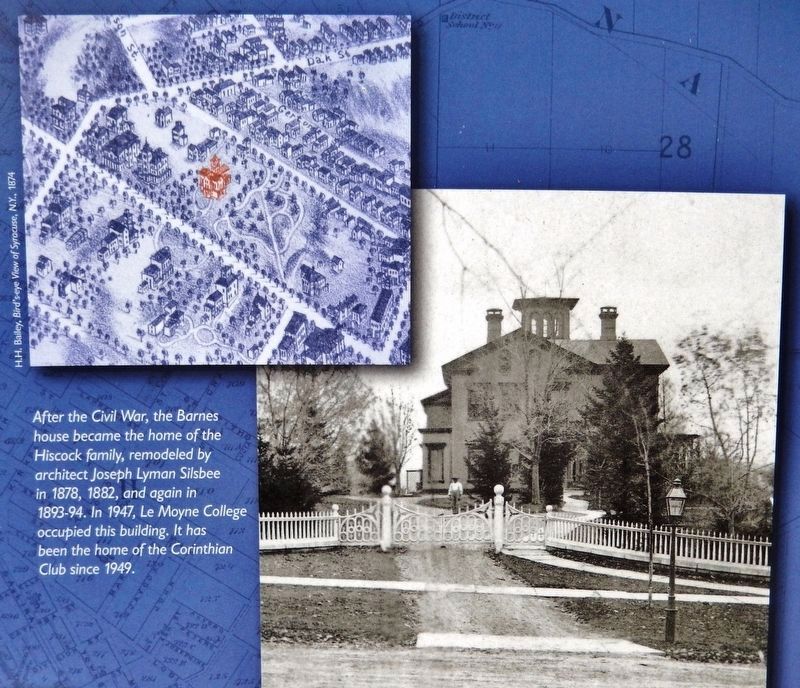 Courtesy of Onondaga Historical Association
4. Marker detail: H.H. Bailey, Bird’s-eye View of Syracuse, N.Y., 1874
After the Civil War, the Barnes house became the home of the Hiscock family, remodeled by architect Joseph Lyman Silsbee in 1878, 1882, and again in 1893-94. In 1947, Le Moyne College occupied this building. It has been the home of the Corinthian Club since 1949.
part of the Compromise of 1850 between Southern slave-holding interests and Northern Free-Soilers. It required that all escaped slaves, upon capture, be returned to their masters and that officials and citizens of free states had to cooperate. (Submitted on September 4, 2019, by Cosmos Mariner of Cape Canaveral, Florida.) 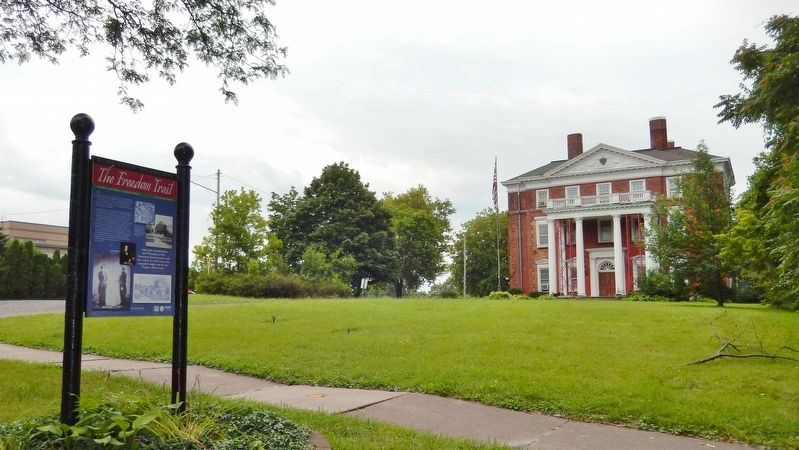 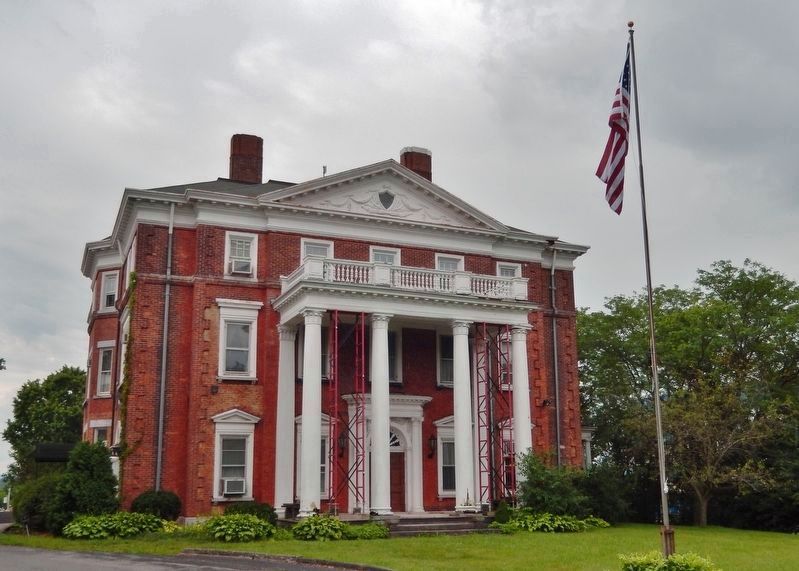