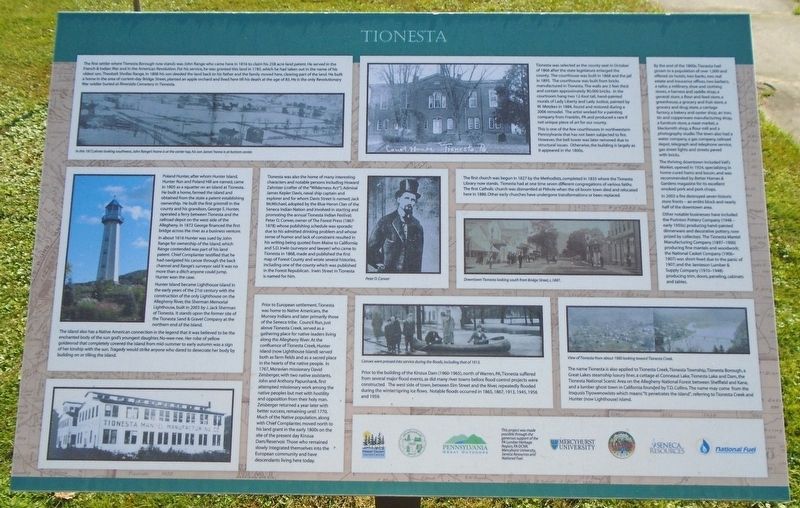 The first settler where Tionesta Borough now stands was John Range who came here in 1816 to claim his 258 acre land patent. He served in the French and Indian War and in the American Revolution. For his service, he was granted this land in 1785, which he had taken out in the name of his oldest son, Theobalt Shollas Range. In 1808 his son deeded the land back to his father and the family moved here, clearing part of the land. He built a home in the area of current-day Bridge Street, planted an apple orchard and lived here until his death at the age of 83. He is the only Revolutionary War soldier buried at Riverside Cemetery in Tionesta. , [Photo caption reads] In this 1872 photo looking southwest, John Range's home is at the center top, his son James' home is at bottom center. ,

, , , , , , , , , , , , , , , , , , , . , Poland Hunter, after whom Hunter Island, Hunter Run and Poland Hill are named, came in 1805 as a squatter on an island at Tionesta. He built a home, farmed the island and obtained from the state a patent establishing ownership. He built the first gristmill in the county and his grandson, George S. Hunter, operated a ferry between Tionesta and the railroad depot on the west side of the Allegheny. In 1872 George financed the first bridge across the river as a business venture.

In about 1816 Hunter was sued by John Range for ownership of the island, which Range contended was part of his land patent. Chief Cornplanter testified that he had navigated his canoe through the channel and Range's surveyor said it was no more than a ditch anyone could jump. Hunter won the case.

Hunter Island became Lighthouse Island in the early years of the 21st century when the construction of the only Lighthouse on the Allegheny River, the Sherman Memorial Lighthouse, built in 2003 by J. Jack Sherman of Tionesta. It stands upon the former site of the Tionesta Sand and Gravel Company at the northern end of the island.

The island also has a Native American connection in the legend that it was believed to be the enchanted body of the sun god's youngest daughter, No-wee-nee. Her robe of yellow goldenrod that completely covered the island from mid-summer to early autumn was a sign of her kinship with the sun. Tragedy would strike anyone who dared to desecrate her body by building on or tilling the island. ,

, , , , , , , , , , , , , , , , , , , . , Tionesta was also the home of many interesting characters and notable persons including Howard Zahni[s]er (crafter of the "Wilderness Act"); Admiral James Kepler Davis, naval ship captain and explorer and for whom Davis Street is named; Jack McMichael, adopted by the Blue Heron Clan of the Seneca Indian Nation and involved in starting and promoting the annual Tionesta Indian Festival; Peter O. Conver [photo], owner of The Forest Press (1867-1878) whose publishing schedule was sporadic due to his admitted drinking problem and whose sense of humor and lack of constraint resulted in his writing being quoted from Maine to California; and S.D. Irwin (surveyor and lawyer) who came to Tionesta in 1868, made and published the first map of Forest County and wrote several histories, including one of the county which was published in the Forest Republican. Irwin Street in Tionesta is named for him. ,
, , , , , , , , , , , , , , , , , , , . , Prior to European settlement, Tionesta was home to Native Americans, the Munsey Indians and later primarily those of the Seneca tribe. Council Run, just above Tionesta Creek, served as a gathering place for native leaders living along the Allegheny River. At the confluence of Tionesta Creek, Hunter Island (now Lighthouse Island) served both as farm fields and as a sacred place in the hearts of the native people. In 1767, Moravian missionary David Zeisberger, with two native assistants, John and Anthony Papunhank, first attempted missionary work among the native peoples but met with hostility and opposition from their holy man. Zeisberger returned a year later with better success, remaining until 1770. Much of the Native population, along with Chief Cornplanter, moved north to his land grant in the early 1800s on the site of the present day Kinzua Dam/Reservoir. Those who remained slowly integrated themselves into the European community and have descendants living here today. ,
, , , , , , , , , , , , , , , , , , , . , Tionesta was selected as the county seat in October of 1866 after the state legislature enlarged the county. The courthouse was built in 1868 and the jail in 1895. The courthouse was built with bricks manufactured in Tionesta. The walls are 2 feet thick and contain approximately 90,000 bricks. In the courtroom hang two 12-foot tall, hand-painted murals of Lady Liberty and Lady Justice, painted by W. Metzkes in 1884, found and restored during a 2006 remodel. The artist worked for a painting company from Franklin, PA and produced a rare if not unique piece of art for our county.

This one of the few courthouses in northwestern Pennsylvania that has not been subjected to fire. However, the bell tower was later removed due to structural issues. Otherwise, the building is largely as it appeared in the 1800s. ,

The thriving downtown included Vail's Market, opened in 1924, specializing in home-cured hams and bacon, and was recommended by Better Homes and Gardens magazine for its excellent smoked pork and pork chops.

In 2003 a fire destroyed seven historic store fronts - an entire block and nearly half of the downtown area.