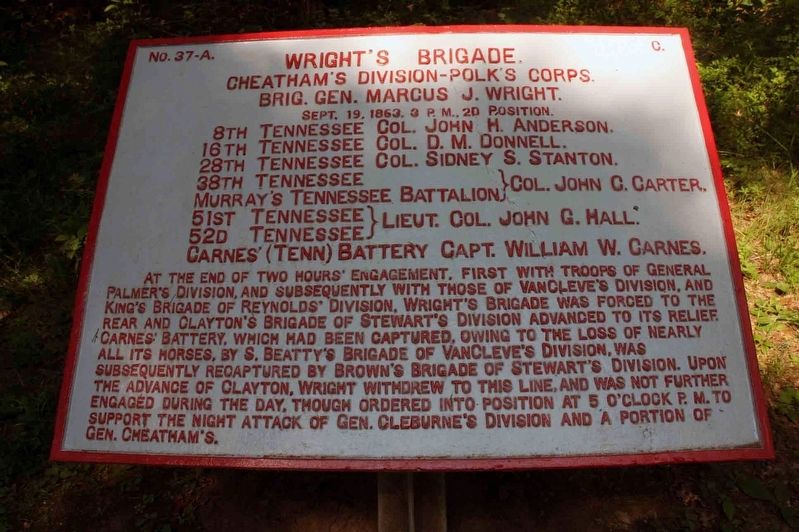 . This historical marker was erected in 1890 by War Department. It is in Fort Oglethorpe in Catoosa County Georgia 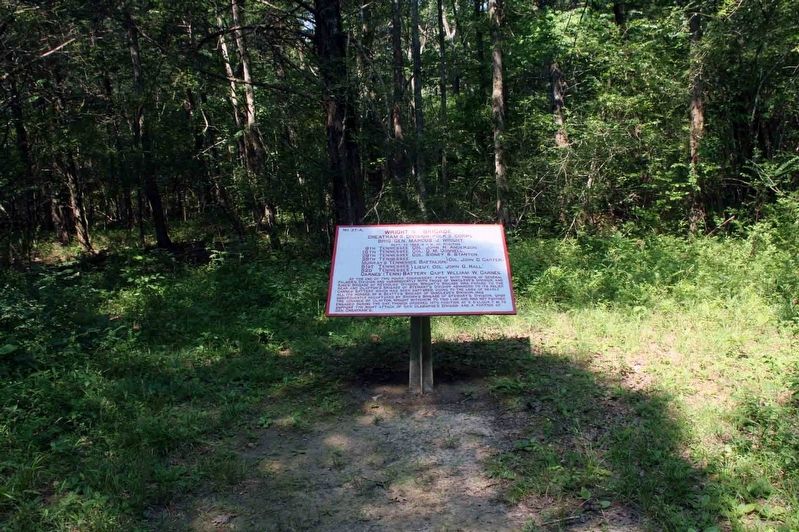 Click or scan to see
this page online
during the day, though ordered into position at 5:00 P.M. to support the night attack of General Cleburne’s Division and a portion of General Cheatham’s.

Topics. This memorial is listed in these topic lists: Parks & Recreational Areas • War, US Civil. A significant historical date for this entry is September 20, 1863.

Location. 34° 54.866′ N, 85° 14.818′ W. Marker is in Fort Oglethorpe, Georgia, in Catoosa County. Memorial can be reached from Brotherton Road when traveling south. This marker is located in the national park that preserves the site of the Chickamauga Battlefield. The marker is located in the woods south of Brock’s Field. Two paths start in the southwest corner of Brock’s field, near the blue plaque (No. 13-B), for Turchin's Brigade (USA). A path starting near the marker to the 12th and 47th Tennessee (CSA) leads to the marker. Parking is available on Brotherton Road at Brock’s field (N 34° 55.2299 W 85° 14.9087). Touch for map. Marker is in this post office area: Fort Oglethorpe GA 30742, United States of America. Touch for directions.

More about this marker. The plaques on the Chickamauga Battlefield were installed by the War Department in 1890. This plaque is red indicating it is for a Confederate unit.

I used the "Chickamauga Battlefield" map, that I purchased at the Chickamauga and Chattanooga National Military Park, Visitor Center, to determine both the marker number for this tablet and the tablet's location in relation to the rest of the park's monuments, markers, and tablets. According to the map it provides the, "numerical listing of all monuments, markers, and tablets on the Chickamauga Battlefield (using the Chick-Chatt NMP Monument Numbering System).