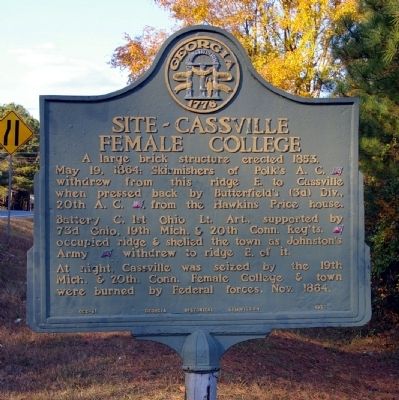 Photographed By David Seibert, November 9, 2008
1. Site - Cassville Female College Marker
Inscription.
Site - Cassville Female College. A large brick structure erected 1853.. May 19, 1864: Skirmishers of Polk's A.C. [CS] withdrew from this ridge E. to Cassville when pressed back by Butterfield's (3d) Div., 20th A.C. [US], from the Hawkins Price house., Battery C, 1st Ohio Lt. Art., supported by 73d Ohio, 19th Mich. and 20th Conn. Reg’ts. [US] occupied ridge and shelled the town as Johnston's Army [CS] withdrew to ridge E. of it., At night Cassville was seized by the 19th Mich. and 20th Conn. Female College and town were burned by Federal forces, Nov. 1864. . This historical marker was erected in 1953 by Georgia Historic Commission. It is in Cassville in Bartow County Georgia

At night Cassville was seized by the 19th Mich. & 20th Conn. Female College & town were burned by Federal forces, Nov. 1864.

Topics and series. This historical marker is listed in these topic lists: Education • War, US Civil • Women. In addition, it is included in the Georgia Historical Society series list. A significant historical month for this entry is May 1766. 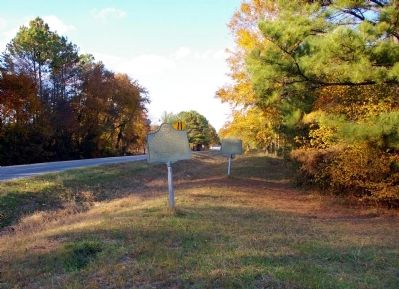 Click or scan to see
this page online
. Marker is in this post office area: Cassville GA 30123, United States of America. Touch for directions.

Other nearby markers. At least 8 other markers are within walking distance of this marker. Confederate Army of Tenn. at Cassville (here, next to this marker); Noble Hill Rosenwald School (about 800 feet away, measured in a direct line); Site of Cassville (approx. 0.3 miles away); Town Of Cassville (approx. 0.3 miles away); Site - Cherokee Baptist College (approx. half a mile away); Confederate Dead (approx. 0.7 miles away); Grave of Gen. William Tatum Wofford (approx. 0.7 miles away); Confederate Memorial Cassville Cemetery (approx. ¾ mile away). Touch for a list and map of all markers in Cassville.
Credits. This page was last revised on January 26, 2020. It was originally submitted on November 29, 2008, by David Seibert of Sandy Springs, Georgia. This page has been viewed 1,681 times since then and 22 times this year. Photos:   1, 2. submitted on November 29, 2008, by David Seibert of Sandy Springs, Georgia. • Craig Swain was the editor who published this page.
Share this page.