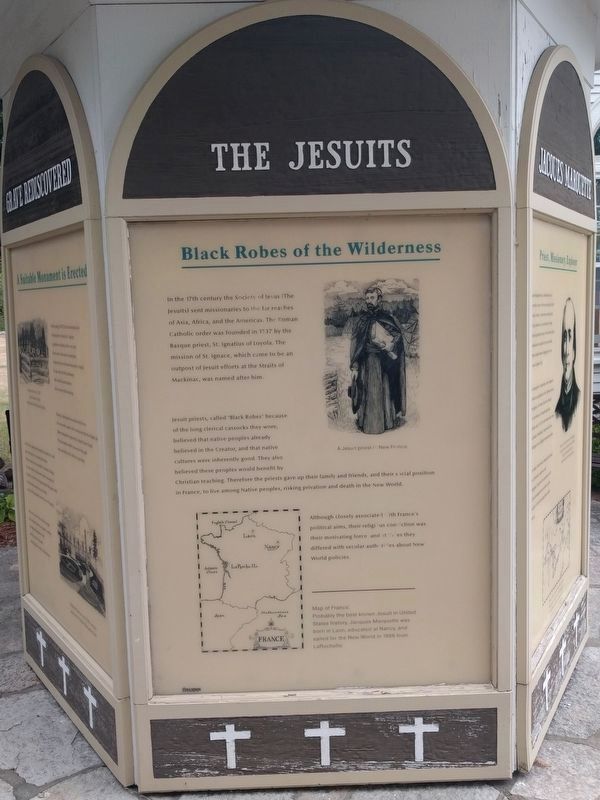 The Jesuits
Black Robes of the Wilderness

In the 17th century the Society of Jesus (The Jesuits) sent missionaries to the far reaches of Asia, Africa, and the Americas. The Roman Catholic order was founded in 1537 by the Basque priest, St. Ignatius of Loyola. The mission of St. Ignace, which came to be an outpost of Jesuit efforts at the Straits of Mackinac, was named after him.

Jesuit priests, called "Black Robes" because of the long clerical cassocks they wore, believed that native peoples already believed in the Creator, and that native cultures were inherently good. They also believed these peoples would benefit by Christian teaching. Therefore the priests gave up their family and friends, and their social position in France, to live among Native peoples, risking privation and death in the New World.

Although closely associated with France's political aims, their religious conviction was their motivating force and at times they differed with secular authorities about New World policies. 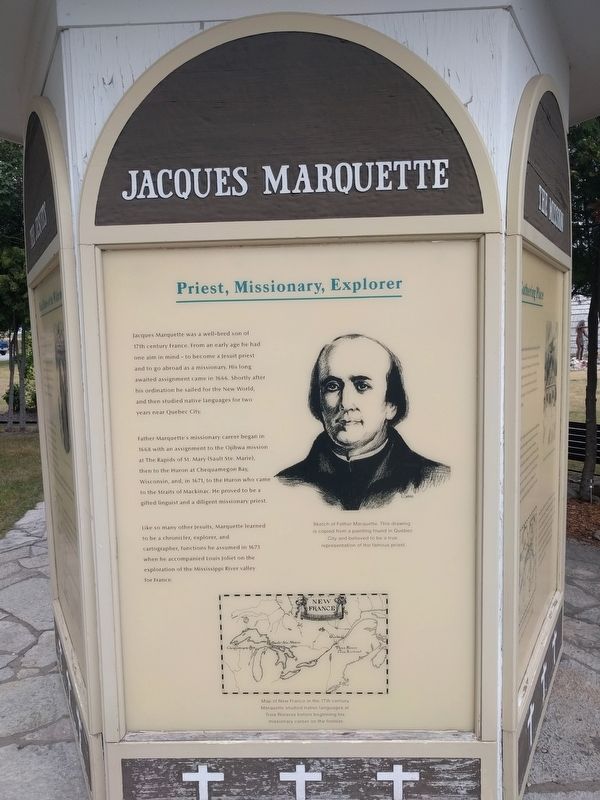 Click or scan to see
this page online
of New France. Probably the best known Jesuit in United States history, Jacques Marquette was born in Laon, educated at Nancy, and sailed for the New World in 1666 from LaRochelle.

Jacques Marquette was a well-bred sone of 17th century France. From an early age he had one aim in mind - to become a Jesuit priest and to go abroad as a missionary. His long awaited assignment came in 1666. Shortly after his ordination he sailed for the New World, and then studied native languages for two years near Quebec City.

Father Marquette's missionary career began in 1668 with an assignment to the Ojibwa mission at The Rapids of St. Mary (Sault Ste. Marie), then to the Huron at Chequamegon Bay, Wisconsin, and, in 1671, to the Huron who came to the Straits of Mackinac. He proved to be a gifted linguist and a diligent missionary priest.

Like so many other Jesuits, Marquette learned to be a chronicler, explorer, and cartographer, functions he assumed in 1673 when he accompanied Louis Joliet on the exploration of the Mississippi River valley for France.

Upper image caption:
Sketch of Father Marquette. This drawing is copied from a painting found in Quebec City and believed to be a true representation of the famous priest. 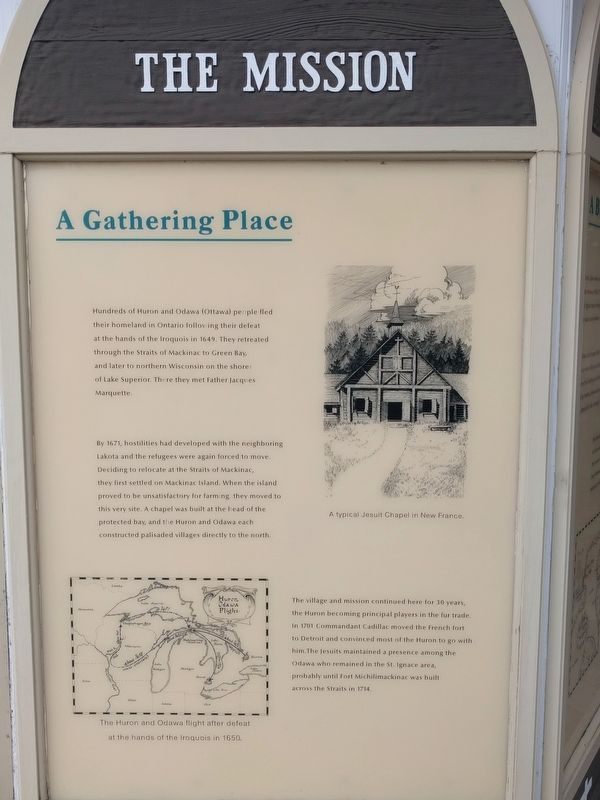 The Mission
A Gathering Place
Hundreds of Huron and Odawa (Ottawa) people fled their homeland in Ontario following their defeat at the hands of the Iroquois in 1649. They retreated through the Straits of Mackinac to Green Bay, and later to northern Wisconsin on the shores of Lake Superior. There they met Father Jacques Marquette.

In 1671, hostilities had developed with the neighboring Lakota and the refugees were again forced to move. Deciding to relocate at the Straits of Mackinac, they first settled on Mackinac Island. When the island proved to be unsatisfactory for farming, they moved to this very site. A chapel was built at the head of the protected bay, and the Huron and Odawa each constructed palisaded villages directly to the north.

The village and mission continued here for 30 years, the Huron becoming principal players in the fur trade. In 1701 Commandant Cadillac moved the French fort to Detroit and convinced most of the Huron to go with him. The Jesuits maintained a presence among the Odawa who remained in the St. Ignace area, probably until Fort Michilimackinac was built across the Straits in 1714. 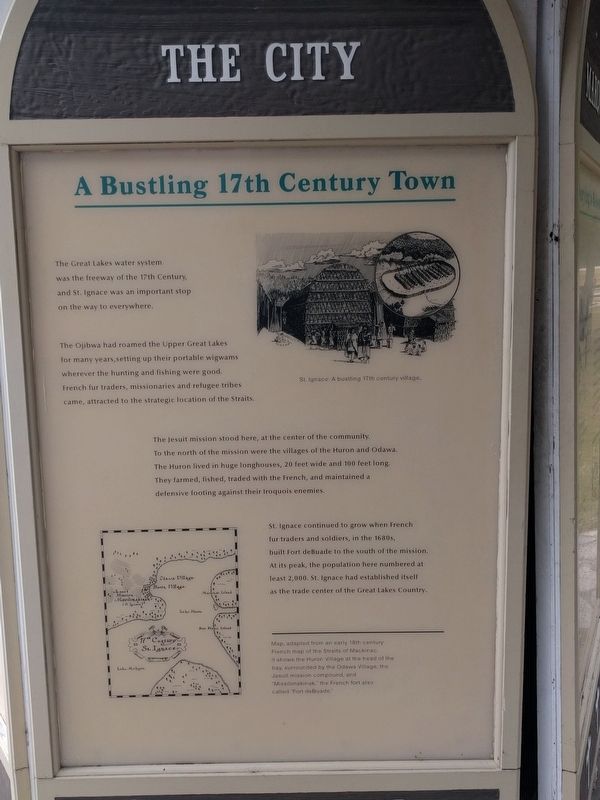 Photographed By Joel Seewald, August 18, 2019
4. Father Marquette Park Kiosk Marker - The City: A Bustling 17th Century Town
caption:
The Huron and Odawa flight after defeat at the hands of the Iroquois in 1650.

The Great Lakes water system was the freeway of the 17th Century, and St. Ignace was an important stop on the way to everywhere.

The Ojibwa had roamed the Upper Great Lakes for many years, setting up their portable wigwams wherever the hunting and fishing were good. French fur traders, missionaries and refugee tribes came, attracted to the strategic location of the Straits.

The Jesuit mission stood here, at the center of the community. To the north of the mission were the villages of the Huron and the Odawa. The Huron lived in huge longhouses, 20 feet wide and 100 feet long. They farmed, fished, traded with the French, and maintained a defensive footing against their Iroquois enemies.

St. Ignace continued to grow when French fur traders and soldiers, in the 1680s, built Fort deBuade to the south of the mission. At its peak, the population here numbered at least 2,000. St. Ignace had established itself as the trade center of the Great Lakes Country.

Lower image caption:
Map, adapted from an early 18th century French map of the Straits of Mackinac. It shows the Huron Village at the head of 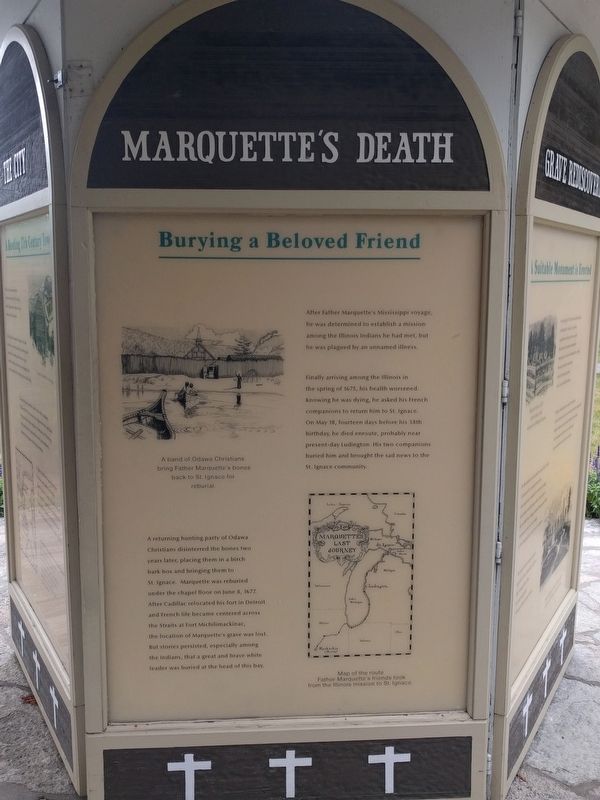 After Father Marquette's Mississippi voyage, he was determined to establish a mission among the Illinois Indians he had met, but he was plagued by an unnamed illness.

Finally arriving among the Illinois in the spring of 1675, his health worsened. Knowing he was dying, he asked his French companions to return him to S. Ignace. On May 18, fourteen days before his 38th birthday, he died enroute, probably near present-day Ludington. His two companions buried him and brought the sad news to the St. Ignace community.

A returning hunting party of Odawa Christians disinterred the bones two years later, placing them in a birch bark box and bringing them to St. Ignace. Marquette was reburied under the chapel floor on June 8, 1677. After Cadillac relocated his fort in Detroit and French life became centered across the Straits at Fort Michilimackinac, the location of Marquette's grave was lost. But stories persisted, especially among the Indians, that a great and brave white leader was buried at the head of this bay. 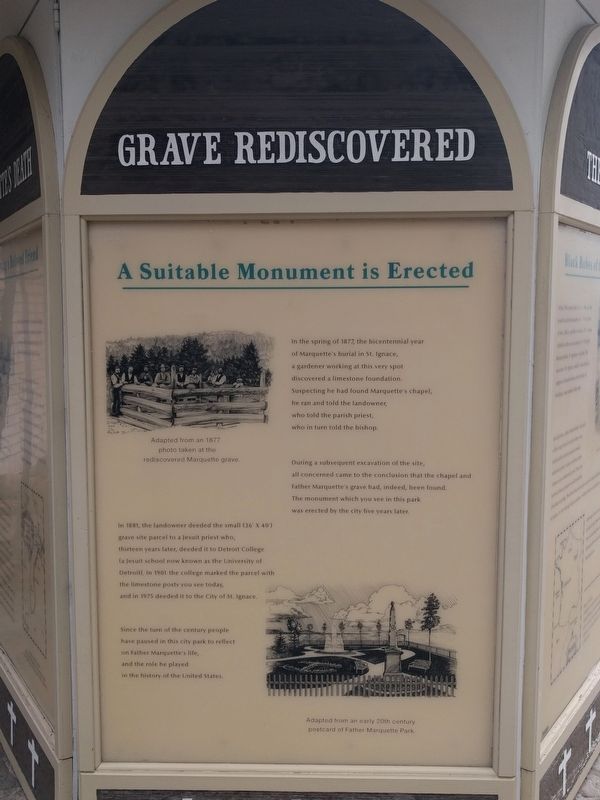 In the spring of 1877, the bicentennial year of Marquette's burial in St. Ignace, a gardener working at this very spot discovered a limestone foundation. Suspecting he had found Marquette's chapel, he ran and told the landowner, who told the parish priest, who in turn told the bishop.

During a subsequent excavation of the site, all concerned came to the conclusion that the chapel and Father Marquette's grave had, indeed, been found. The monument which you see in this park was erected by the city five years later.

In 1881, the landowner deeded the small (36' X 40') grave site parcel to a Jesuit priest who, thirteen years later, deeded it to Detroit College (a Jesuit school now known as the University of Detroit). In 1901 the college marked the parcel with the limestone posts you see today, and in 1975 deeded it to the City of St. Ignace.

Since the turn of the century people have paused in this city park to reflect on Father Marquette's life, and the role he played in the history of the United States.

Upper image caption:
Adapted from an 1877 photo taken at the rediscovered Marquette grave.

Lower image caption:
Adapted from an 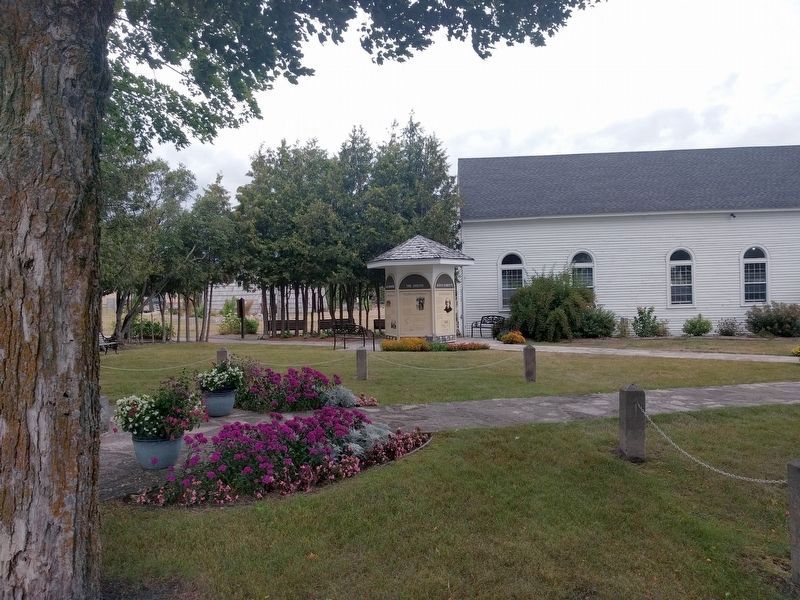 Topics. This historical marker is listed in these topic lists: Churches & Religion • Colonial Era • Exploration • Native Americans. A significant historical date for this entry is May 18, 1537. 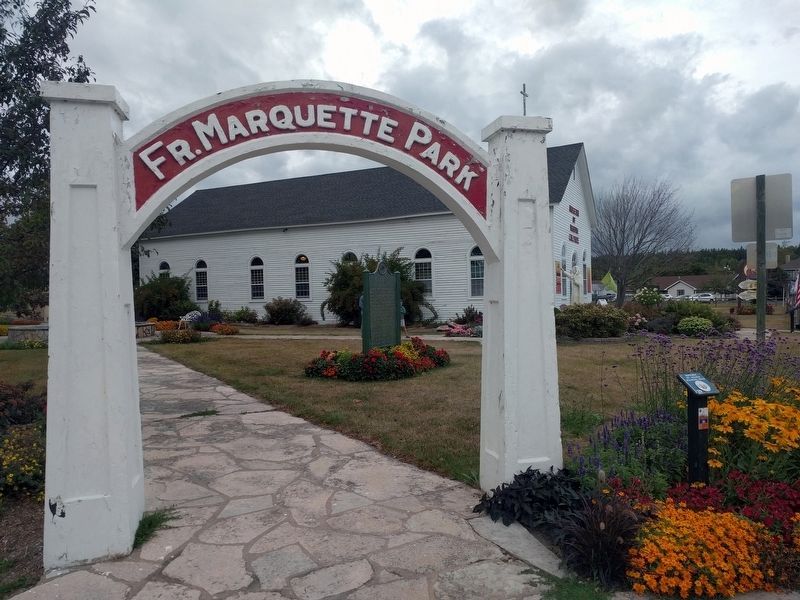