gifted to The Lusitania Museum at the Old Head

— by Gerry Doyle, his wife Josie and their family — 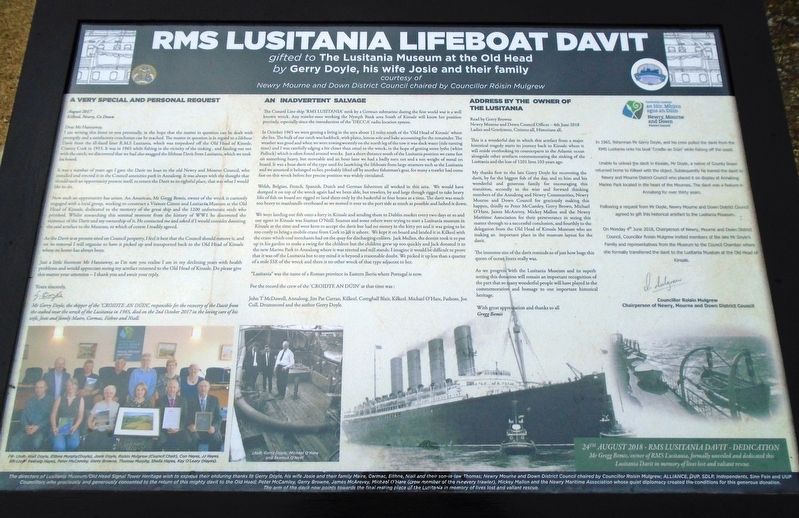 A VERY SPECIAL AND PERSONAL REQUEST

Dear Mr Hannaway, , I am writing this letter to you personally, in the hope that the matter in question can be dealt with promptly and a satisfactory conclusion can be reached. The matter in question is in regard to a lifeboat Davit from the ill-fated liner R.M.S. Lusitania, which was torpedoed off the Old Head of Kinsale, County Cork in 1915. It was in 1965 while fishing in the vicinity of the sinking, and hauling our net with the catch, we discovered that we had also snagged the lifeboat Davit from Lusitania, which we took on board.

It was a number of years ago I gave the Davit on loan to the old Newry and Mourne Council, who installed and erected it in the Council amenities park in Annalong. It was always with the thought that should such an opportunity present itself, to return the Davit to its rightful place, that was what I would like to do.

Now such an opportunity has arisen. An American, Mr Gregg Bemis, owner of the wreck is currently engaged with a local group, working to construct a Visitors Centre and Lusitania Museum at the Old Head of Kinsale, dedicated to the memory of the great ship and the 1200 unfortunate souls who perished. Whilst researching this seminal moment from the history of world war one he discovered the existence of the Davit and my ownership of it. He contacted me and asked if I would consider donating the said artefact to the Museum, to which of course I readily agreed.

As the Davit is at present sited on Council property, I feel it best that the Council should remove it, and on its removal I will organise to have it picked up and transported back to the Old Head of Kinsale where its home has always been.

Just a little footnote Mr Hannaway, as I'm sure you realise I am in my declining years with health problems and would appreciate seeing my artefact returned to the Old Head of Kinsale. Do please give this matter your attention , I thank you and await your reply.

Mr Gerry Doyle, the skipper of the "CROIDTE AN DÚIN', responsible for the recovery of the Davit from the seabed near the wreck of the Lusitania in 1965, died on the 2nd October 2017 in the loving care of his wife, Josie and family Maire, Cormac, Eithne and Niall.

The Cunard Line ship 'RMS LUSITANIA' sunk by a German submarine during the first world war is a well known wreck. Any trawler-man working the Nymph Bank area South of Kinsale will know her position precisely, especially since the introduction of the 'DECCA' radio location system.

In October 1965 we were getting a living in the area about 12 miles south of the 'Old Head of Kinsale' where she lies. The bulk of our catch was haddock, with plaice, lemon sole and hake accounting for the remainder. The weather was good and when we were towing westerly on the north leg of the tow it was slack water (tide turning time) and I was carefully edging a bit closer than usual to the wreck, in the hope of getting some lythe (white Pollock) which is often found around wrecks. Just a short distance south of the Lusitania position we came fast on something heavy, but moveable and an hour later we had a badly torn net and a ton weight of metal on board. It was a boat davit of the type used for launching the lifeboats from large steamers such as the Lusitania and we assumed it belonged to her, probably lifted off by another fisherman's gear, for many a trawler had come fast on this wreck before her precise position was widely circulated.

Welsh, Belgian, French, Spanish, Dutch and German fishermen all worked in this area. We would have dumped it on top of the wreck again had we been able, but trawlers, by and large though rigged to take heavy lifts of fish on board are rigged to land them only by the basketful or four boxes at a time. The davit was much too heavy to manhandle overboard so we moved it over to the port side as much as possible and lashed it down.

We were landing our fish onto a lorry in Kinsale and sending them to Dublin market every two days or so and our agent in Kinsale was Seamus O'Neill. Seamus and some others were trying to start a Lusitania museum in Kinsale at the time and were keen to accept the davit but had no money in the kitty yet and it was going to be too costly to bring a mobile crane from Cork to lift it ashore. We kept it on board and landed it in Kilkeel with the crane which coal merchants had on the quay for discharging colliers. Jack Mullen, the dentist took it to put up in his garden to make a swing for the children but the children grew up too quickly and Jack donated it to the new Marine Park in Annalong where it was erected and still stands. I imagine it would be difficult to prove that it was off the Lusitania but to my mind it is beyond a reasonable doubt. We picked it up less than a quarter of a mile SSE of the wreck and there is no other wreck of that type adjacent to her.

"Lusitania" was the name of a Roman province in Eastern Iberia where Portugal is now.

For the record the crew of the 'CROIDTE AN DÚIN' at that time was:

ADDRESS BY THE OWNER OF THE LUSITANIA

Read by Gerry Browne , Newry Mourne and Down Council Officers - 4th June 2018 , Ladies and Gentlemen, Citizens all, Historians all,

This is a wonderful day in which this artefact from a major historical tragedy starts its journey back to Kinsale where it will reside overlooking its counterparts in the Atlantic ocean alongside other artefacts commemorating the sinking of the Lusitania and the loss of 1201 lives 103 years ago.

My thanks first to the late Gerry Doyle for recovering the davit, by far the biggest fish of the day, and to him and his wonderful and generous family for encouraging this transition, secondly to the wise and forward thinking members of the Annalong and Newry Communities, Newry Mourne and Down Council for graciously making this happen, thirdly to Peter McCamley, Gerry Brown, Michael O'Hare, James McArevey, Mickey Mallon and the Newry Maritime Association for their perseverance in seeing this matter through to a successful conclusion, and fourthly to the delegation from the Old Head of Kinsale Museum who are making an important place in the museum layout for the davit.

The immense size of the davit reminds us of just how huge this queen of ocean liners really was.

As we progress with the Lusitania Museum and its superb setting this donation will remain an important recognition of the part that so many wonderful people will have played in the commemoration and homage to our important historical heritage.

With great appreciation and thanks to all , Gregg Bemis

Newry, Mourne and Down District Council

In 1965, fisherman Mr Gerry Doyle, and his crew pulled the davit from the RMS Lusitania onto his boat 'Croidte an Dúin' while fishing off the coast.

Unable to unload the davit in Kinsale, Mr Doyle, a native of County Down returned home to Kilkeel with the object. Subsequently he loaned the davit to Newry and Mourne District Council who placed it on display at Annalong Marine Park located in the heart of the Mournes. The davit was a feature in Annalong for over thirty years.

Following a request from Mr Doyle, Newry, Mourne and Down District Council Councillor Roisin Mulgrew invited members of the late Mr Doyle's Family and representatives from the Museum to the Council Chamber where she formally transferred the davit to the Lusitania Museum at the Old Head of Kinsale.

The directors of Lusitania Museum/Old Head Signal Tower Heritage wish to express their enduring thanks to Gerry Doyle, his wife Josie and their family Maire, Cormac, Eithne, Niall and their son-in-law Thomas; Newry Mourne and Down District Council chaired by Councillor Roisin Mulgrew; ALLIANCE, DUP, SDLP, Independents, Sinn Fein and UUP Councillors who graciously and generously consented to the return of this mighty davit to the Old Head; Peter McCamley, Gerry Browne, James McArevey, Michael O'Hare (crew member of the recovery trawler), Mickey Mallon and the Newry Maritime Association whose quiet diplomacy created the conditions for this generous donation. The arm of the davit now points toward the final resting place of the Lusitania in memory of lives lost and valiant rescue.

. This historical marker was erected by Lusitania Museum / Old Head Signal Tower Heritage. It is in Old Head in County Cork Munster Ireland