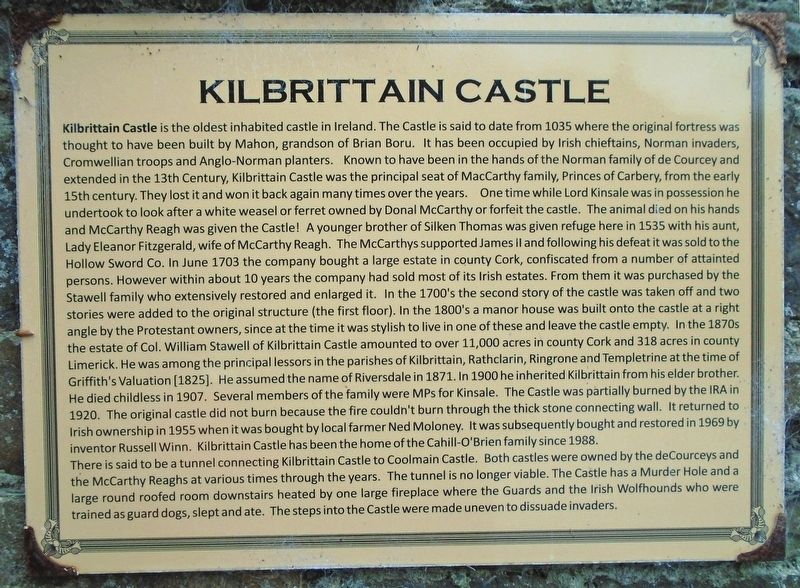 Kilbrittain Castle is the oldest inhabited castle in Ireland. The Castle is said to date from 1035 where the original fortress was thought to have been built by Mahon, grandson of Brian Boru. It has been occupied by Irish chieftains, Norman invaders, Cromwellian troops and Anglo-Norman planters. Known to have been in the hands of the Norman family of de Courcey and extended in the 13th Century, Kilbrittain Castle was the principal seat of MacCarthy family, Princes of Carbery, from the early 15th century. They lost it and won it back again many times over the years. One time while Lord Kinsale was in possession he undertook to look after a white weasel or ferret owned by Donal McCarthy or forfeit the castle. The animal died on his hands and McCarthy Reagh was given the Castle! A younger brother of Silken Thomas was given refuge here in 1535 with his aunt, Lady Eleanor Fitzgerald, wife of McCarthy Reagh. The McCarthys supported James II and following his defeat it was sold to the Hollow Sword Co. In June 1703 the company bought a large estate in county Cork, confiscated from a number of attainted persons. However within about 10 years the company had sold most of its Irish estates. From them it was purchased by the Stawell family who extensively restored and enlarged it. In the 1700's the second story of the castle was taken off and two stories were added to the original structure (the first floor). In the 1800's a manor house was built onto the castle at a right angle by the Protestant owners, since at the time it was stylish to live in one of these and leave the castle empty. In the 1870s the estate of Col. William Stawell of Kilbrittain Castle amounted to over 11,000 acres in county Cork and 318 acres in county Limerick. He was among the principal lessors in the parishes of Kilbrittain, Rathclarin, Ringrone and Templetrine at the time of Griffith's Valuation [1825]. He assumed the name of Riversdale in 1871. In 1900 he inherited Kilbrittain from his elder brother. He died childless in 1907. Several members of the family were MPs for Kinsale. The Castle was partially burned by the IRA in 1920. The original castle did not burn because the fire couldn't burn through the thick stone connecting wall. It returned to Irish ownership in 1955 when it was bought by local farmer Ned Moloney. It was subsequently bought and restored in 1969 by inventor Russell Winn. Kilbrittain Castle has been the home of the Cahill-O'Brien family since 1988.

There is said to be a tunnel connecting Kilbrittain Castle to Coolmain Castle. Both castles were owned by the deCourceys and the McCarthy Reaghs at various times through the years. The tunnel is no longer viable. The Castle has a Murder Hole and a large round roofed room downstairs heated by one large fireplace where the Guards and the Irish Wolfhounds who were trained as guard dogs, slept and ate. The steps into the Castle were made uneven to dissuade invaders. . This historical marker is in Kilbrittain in County Cork Munster Ireland