The Federal Army at Kingston 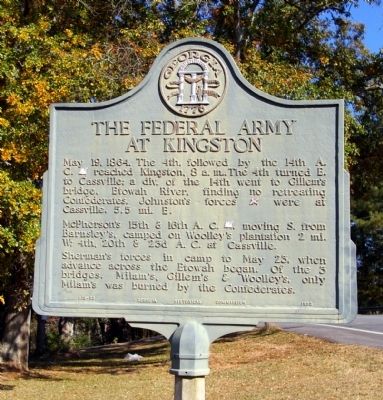 By David Seibert, November 9, 2008
1. The Federal Army at Kingston Marker
Inscription.
The Federal Army at Kingston. . May 19, 1864. The 4th, followed by the 14th A.C. [US] reached Kingston, 8 a.m. The 4th turned E. to Cassville; a div. of the 14th sent to Gillem's bridge, Etowah River, finding no retreating Confederates, Johnston's forces [CS] were at Cassville, 5.5 mi. E., McPherson's 15th and 16th A.C. [US], moving S. from Barnsley's, camped on Woolley's plantation 2 mi. W; 4th, 20th and 23d A.C. at Cassville. , Sherman's forces in camp to May 23, when advance across the Etowah began. Of the 3 bridges, Milam's, Gillem's and Woolley's, only Milam's was burned by the Confederates. . This historical marker was erected in 1953 by Georgia Historical Commission. It is in Kingston in Bartow County Georgia

Sherman's forces in camp to May 23, when advance across the Etowah began. Of the 3 bridges, Milam's, Gillem's & Woolley's, only Milam's was burned by the Confederates.

Topics and series. This historical marker is listed in this topic list: War, US Civil. In addition, it is included in the Georgia Historical Society series list. A significant historical date for this entry is May 19, 1880. 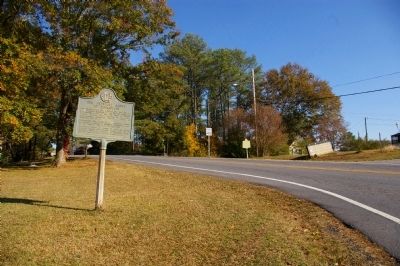 By David Seibert, November 9, 2008
2. The Federal Army at Kingston Marker
Another Georgia Historical Commission Marker, "Hardee's Corps at Kingston", is in the background.

Click or scan to see
this page online
west on Kingston Highway. Touch for map. Marker is in this post office area: Kingston GA 30145, United States of America. Touch for directions.