The Voyage of Prince Henry Sinclair 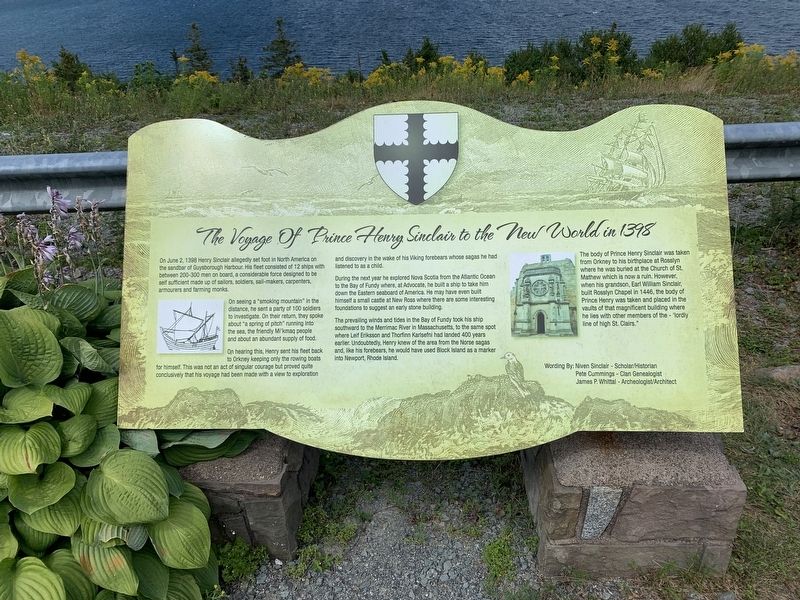 The Voyage of Prince Henry Sinclair to the New World in 1398
On June 2, 1398 Henry Sinclair allegedly set foot in North America on the sandbar of Guysborough Harbour. His fleet consisted of 12 ships with between 200-300 men on board, a considerable force designed to be self sufficient made up of sailors, soldiers, sail-makers, carpenters, armourers and farming monks.

On seeing a “smoking mountain” in the distance, he sent a party of 100 soldiers to investigate. On their return, they spoke about a “spring of pitch” running into the sea, the friendly Mi’kmaq people and about an abundant supply of food.

On hearing this, Henry sent his fleet back to Orkney keeping only the rowing boats for himself. This was not an act of singular courage but proved quite conclusively that his voyage had been made with a view to exploration and discovery in the wake of his Viking forbears whose sagas he had listened to as a child.

During the next year he explored Nova Scotia from the Atlantic Ocean to the Bay of Fundy where, at Advocate. He built a ship to take him down the Eastern seaboard of America. He may even 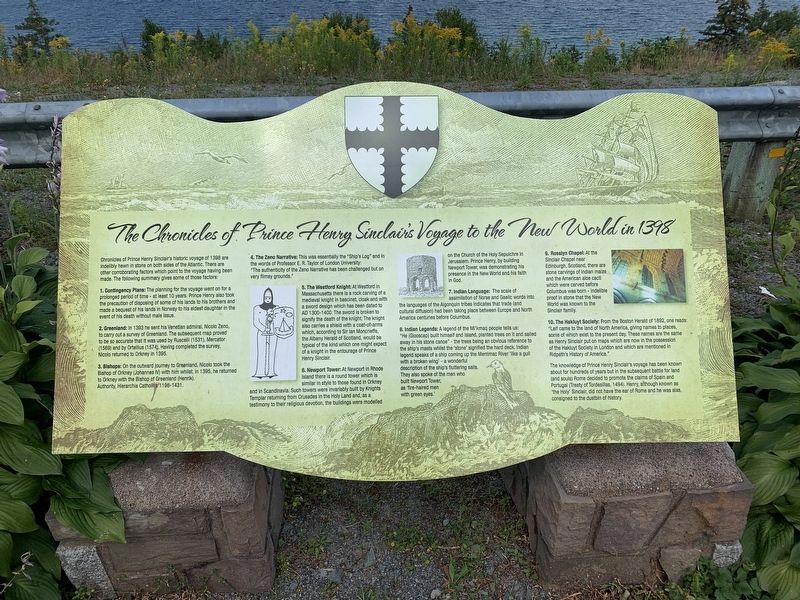 Click or scan to see
this page online
built himself a small castle at New Ross where there are some interesting foundations to suggest an early stone building.

The prevailing winds and tides in the Bay of Fundy took his ship southward to the Merrimac River in Massachusetts, to the same spot where Leif Eriksson and Thorfinn Karlsefni had landed 400 years earlier. Undoubtedly, Henry knew of the area from the Norse sagas and, like his forebears, he would have used Block Island as a marker into Newport, Rhode Island.

The body of Prince Henry Sinclair was taken from Orkney to his birthplace at Rosslyn where he was buried at the Church of St. Matthew which is now a ruin. However, when his grandson, Earl William Sinclair, built Rosslyn Chapel in 1446, the body of Prince Henry was taken and placed in the vaults of that magnificent building where he lies with other members of the – “lordly line of high St. Clairs."


1. Contingency Plans: The planning for the voyage went on for a prolonged period of time – at least 10 years. Prince Henry 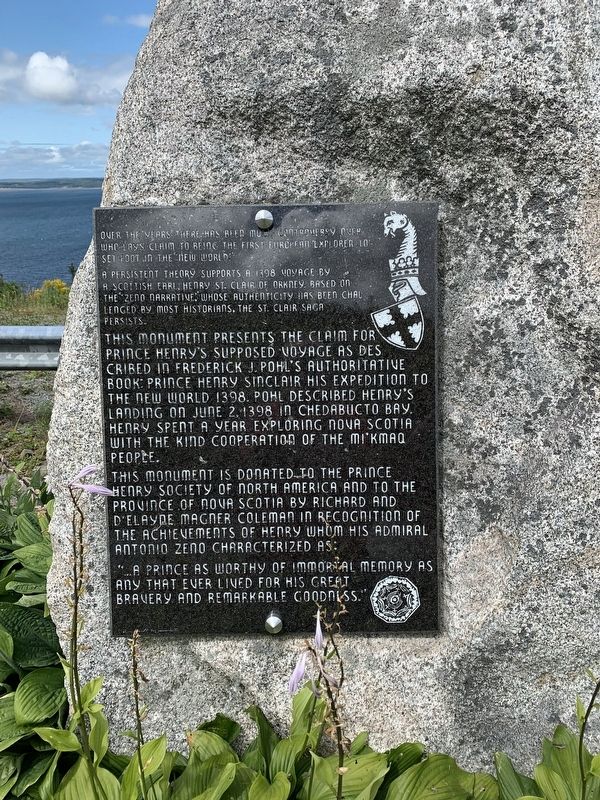 Photographed By Steve Stoessel
3. The Voyage of Prince Henry Sinclair Marker
also took the precaution of disposing some of his lands to his brothers and made a bequest of his lands in Norway to his eldest daughter in the event of his death without male issue.
2. Greenland: In 1393, he sent his Venetian admiral, Nicolo Zeno, to carry out a survey of Greenland. The subsequent map proved to be so accurate that it was used by Ruscelli (1531), Mercator (1569), and by Ortellius (1574). Having completed the survey, Nicolo returned to Orkney in 1395.

3. Bishops: On the outward journey to Greenland, Nicolo took the Bishop of Orkney (Johannes IV) with him whilst, in 1395, he returned to Orkney with the Bishop of Greenland (Henrik).

4. The Zeno Narrative: This was essentially the “Ship’s Log” and in the words of Professor E.R. Taylor of London University: “The authenticity of the Zeno Narratives has been challenged but on very flimsy grounds.”

5. The Westford Knight: At Westford in Massachusetts there is a rock craving of a medieval knight in bascinet, cloak, and a sword design which has been dated to AD 1300-1400. The sword is broken to signify the death of the knight. The knight also carries a shield with a coat-of-arms which, according to Sir Ian Moncrieffe, the Albany Herald of Scotland, would be typical of the kind which one might expect of a knight in the entourage of Prince Henry Sinclair. 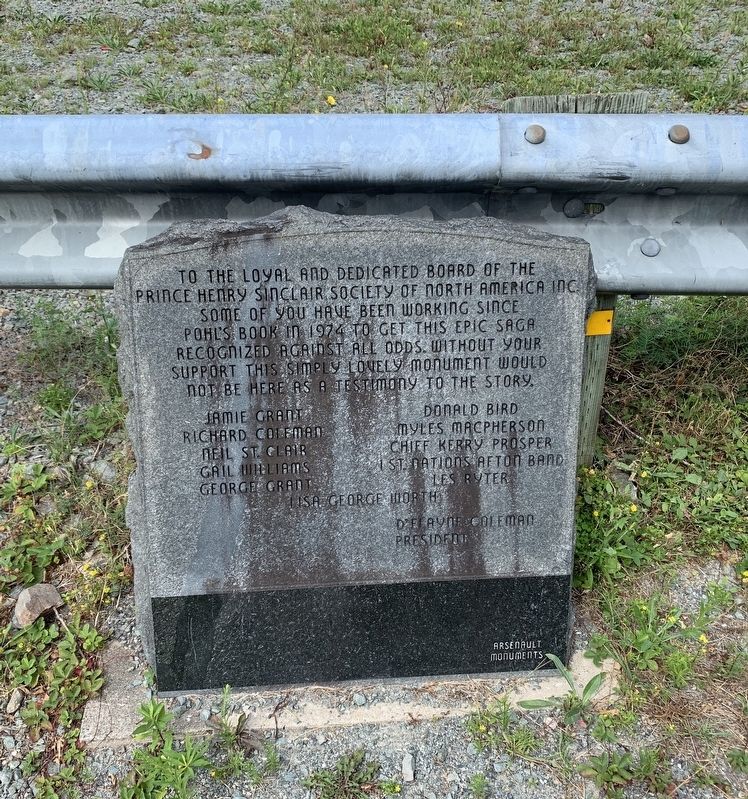 Photographed By Steve Stoessel, August 24, 2019
4. The Voyage of Prince Henry Sinclair Marker
Tower: At Newport in Rhode Island there is a round tower which is similar in style to those found in Orkney and in Scandinavia. Such towers were invariably built by Knights Templar returning from Crusades in the Holy Land and, as a testimony to their religious devotion, the buildings were modelled on the Church of the Holy Sepulchre in Jerusalem. Prince Henry, by building his Newport Tower, was demonstrating his presence in the New World and his faith in God.

7. Indian Language: The scale of assimilation of Norse and Gaelic words into the languages of the Algonquin tribes indicates that trade (and cultural diffusion) had been taking place between Europe and North America centuries before Columbus.
8. Indian Legends: A legend of the Mi’kmaq people tells us: “He (Glooscap) built himself an Island, planted tress on it and sailed away in his stone canoe” – the tress being an obvious reference to the ship’s masts whilst the “stone” signified the hard deck. Indian legend speaks of a ship coming up the Merrimac River ‘like a gull with a broken wing’- a wonderful description of the ship’s fluttering sails. They also spoke of men who built Newport Tower, as ‘fire-haired men with green eyes.’

9. Rosslyn Chapel: At the Sinclair Chapel near Edinburgh, Scotland, there are stone cravings of Indian maize and the American aloe cacti which were carved

Photographed By Steve Stoessel, August 24, 2019
5. The Voyage of Prince Henry Sinclair Marker
before Columbus was born – indelible proof in stone that the New World was known to the Sinclair family.
10. The Hakluyt Society: From the Boston Herald of 1892, one reads “Leif came to the land of North America, giving names to places, some of which exist to the present day. These names are the same as Henry Sinclair put on maps which are now in the possession of the Hakluyt Society in London and which are mentioned in Ridpath’s "History of America.”


The knowledge of Prince Henry Sinclair’s voyage has been known about for hundreds of years but in the subsequent battle for land (and souls) Rome decided to promote the claims of Spain and Portugal (Treaty of Tordesillas, 1494). Henry, although known as ‘the Holy’ Sinclair, did not have the ear of Rome and he was, alas, consigned to the dust bin of history 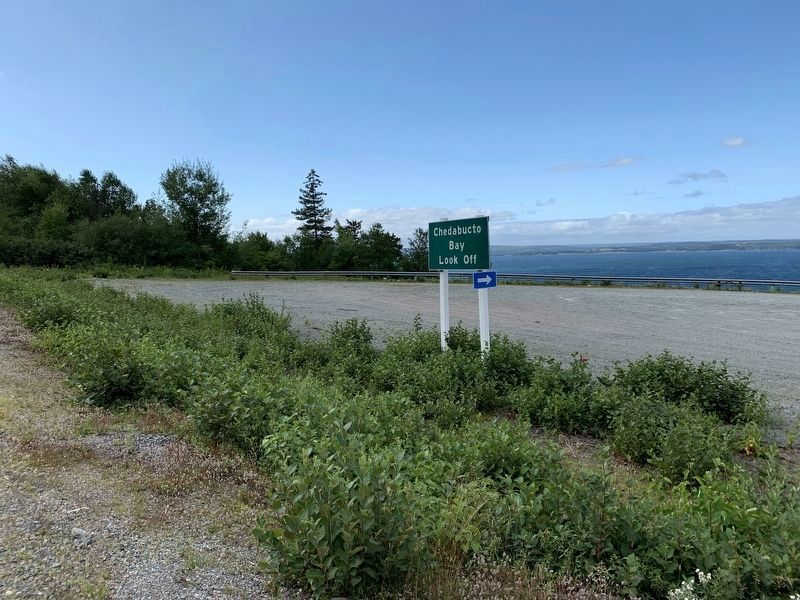 Regarding The Voyage of Prince Henry Sinclair. This is a hoax. I have only submitted it because it is on the wanted marker list. —Steve Stoessel

This database lists all historical markers that we find, regardless of their veracity. Readers are welcome to dispute the accuracy of their inscription by adding their commentary to the markers’ page. There is more information in FAQ No. 17. —Ed.

Additional commentary.
1. Prince Henry Sinclair’s Voyage Is a Hoax
I was at a symposium in Kirkwall, Orkney, in Scotland from 5-11 September 1997 to establish the facts of this alleged voyage. I remember the symposium was partly funded by the Masonic Lodge including Niven Sinclair. Josh Gourlay was also involved.

At that time I was assisting my PhD supervisor Dr. Peter Waddell of the University of Strathclyde.

At the end of the symposium it was found that many claims associated with the supposed voyage had little evidence to support them.

There has been a lot of mis-information about this ‘voyage’ — namely a Scottish newspaper from 1997 which published that after the symposium ‘it was proven beyond reasonable doubt’ that the voyage took place. On a personal visit to Roslin Chapel I saw two chairs placed near the altar celebrating the ‘voyage’. American visitors were being told the blatant lie that the symposium had found for the validity of the voyage.