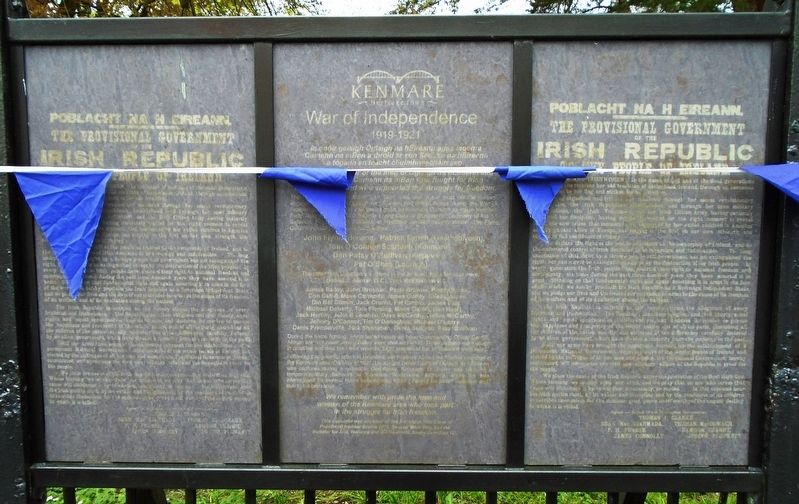 Photographed By William Fischer, Jr., May 18, 2019
1. War of Independence Marker
Inscription.
Erected in honour of the men of Óglaigh na hÉireann and the women of Cumann na mBan who fought for Irish independence and who supported the struggle for freedom..

The Headford Ambush, March 21st 1921, was one of the most notable military engagements between Óglaigh na hÉireann and British troops during the War of Independence. Following intelligence given by Kenmare Cumann na mBan member Petty Tangney, Kerry No. 2 Brigade Flying Column attacked B Company of the 1st Battalion, Royal London Fusiliers, at Headford Junction railway station. The Flying Column included five men from this area,

The other Irish Volunteers involved in the ambush that afternoon were:

During the fierce fighting, which lasted nearly an hour, Commanding Officer Daniel Allman and Volunteer Jimmy Bailey were shot and killed. Three civilians were caught in crossfire and died from their wounds. Eight soldiers of the 1st Battalion were killed. Following this guerrilla attack in Headford, the Fusiliers carried out intense searches in the Kenmare area. On May 1st 1921, Lieutenant Denis Tuohy of Óglaigh na hÉireann was captured during a search in Gortalassa, Kenmare. Lt. Tuohy was taken to a temporary military barracks at Kenmare Workhouse, Kilmurry, where he was interrogated for several hours before being killed - having remained steadfast and true to his comrades.

We remember with pride the men and women of the Kenmare area who took part in the struggle for Irish freedom.

This memorial was unveiled by the Transition Year Class of Pobalscoil Inbhear Scéine 2012, Senator Mark Daly and the Minister for Arts, Heritage and the Gaeltecht Jimmy Deenihan TD.

[1916 Proclamation of the Irish Republic in English and Gaelic]. . This historical marker is in Kenmare in County Kerry Munster Ireland