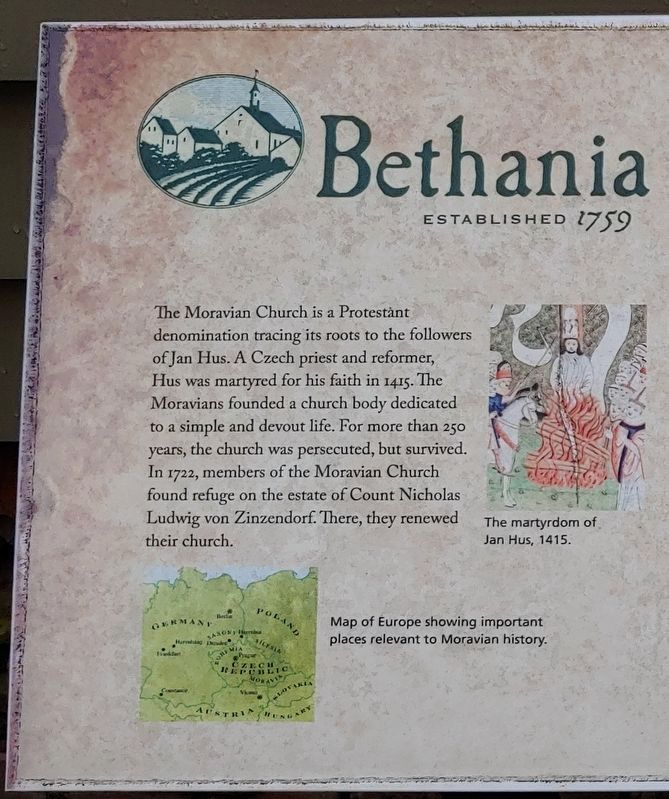 The Moravian Church is a Protestant denomination tracing its roots to the followers of Jan Hus. A Czech priest and reformer, Hus was martyred for his faith in 1415. The Moravians founded a church body dedicated to a simple and devout life. For more than 250 years, the church was persecuted, but survived. In 1722, members of the Moravian Church found refuge on the estate of Count Nicholas Ludwig von Zinzendorf. There, they renewed their church.

1751
29 November: While meeting in London, leaders Of the Moravian Church accept an offer by John Carteret, Lord of Granville, to purchase 100,000 acres from his vast Carolina holdings.

1752
25 August: Bishop August Gottlieb Spangenberg leads a party of Moravians from Bethlehem, Pennsylvania to North Carolina in search of suitable land. Their exploration of the colony will take them as far west as the future Boone area.

27 December: Surveying begins on land along the "three forks of Muddy Creek," which Bishop August Gottlieb Spangenberg writes "seems to me to have been reserved by the Lord for the Brethren." Spangenberg named this tract der 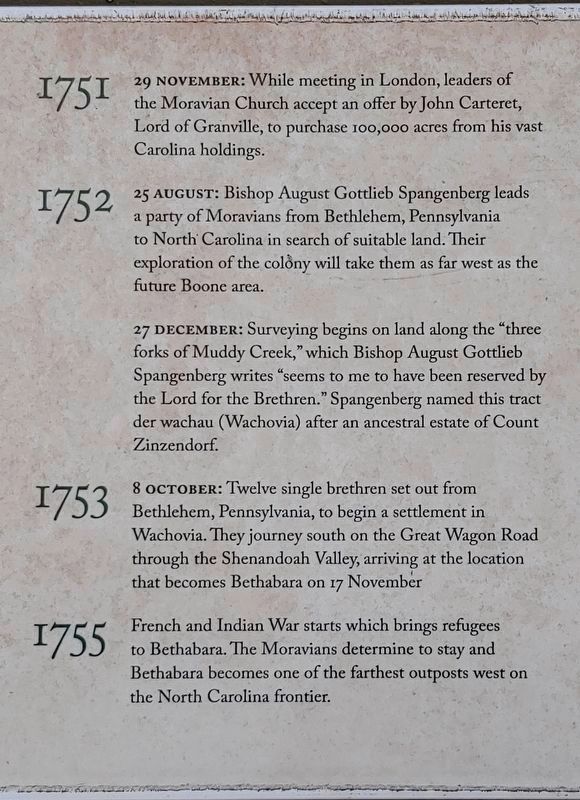 Click or scan to see
this page online
wachau (Wachovia) after an ancestral estate of Count Zinzendorf.

1753
8 October: Twelve single brethren set out from Bethlehem, Pennsylvania, to begin a settlement in Wachovia. They journey south on the Great Wagon Road through the Shenandoah Valley, arriving at the location that becomes Bethabara on 17 November.

1755
French and Indian War starts which brings refugees to Bethabara. lhe Moravians determine to stay and Bethabara becomes one of the farthest outposts west on the North Carolina frontier.

1759
12 June: Bishop August Gottlieb Spangenberg and other church leaders lay out Wachovia's first planned community three miles to the northwest of Bethabara, in an area called Black Walnut Bottom. A plan for the new village is chosen. Cartographer and surveyor Christian Gottlieb Reuter is selected to stake out the site. Spangenberg brought the name for this first of the "villages of the Lord" from Pennsylvania: Bethania.

1760
22 April: The first death occurs in Bethania with the passing of Maria, daughter of Br. and Sr. George Hauser. Maria's burial is the first in Bethania's God's Acre.

1761
21 June: Johannes, son of Johann Heinrich and Barbara Schor, is the first baby born in Bethania.

1762
With the French and Indian War nearing an 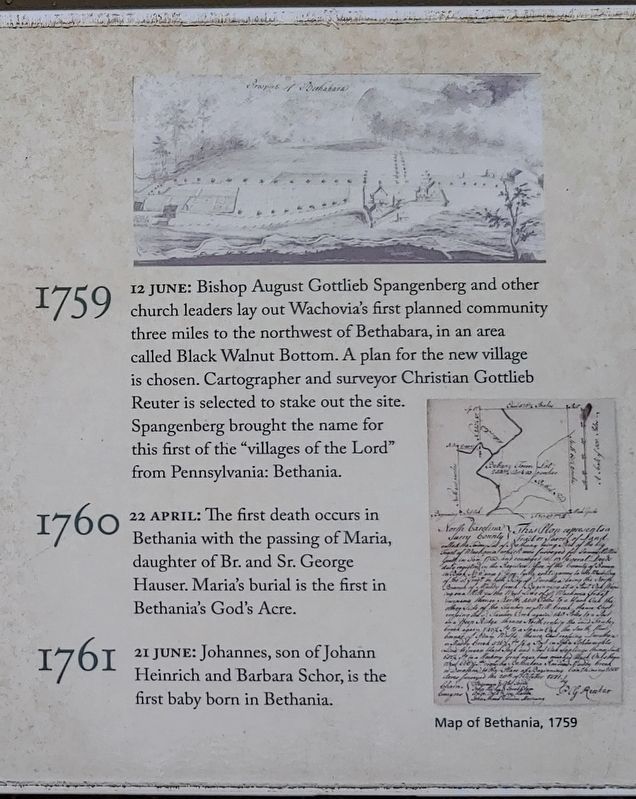 1766
6 January: Twelve Brethren, some from Bethabara, some from Bethania, go to the new town site and cut down the trees where the first house will be built. They also cut timbers for the cabin that will shelter the builders [?]s new town, Salem, will serve as the administrative center of Wachovia.

1767
18 September: Royal Governor William Tryon, his wife, and their attendants, pay a visit to Wachovia. Over the next three days they are entertained and given thorough tours of the three villages of Bethabara, Bethania, and Salem.

1771
Surry County is formed out of Rowan, and Wachovia is cut in half east to west. It isn't until 1773 that the county line is moved south to place all Wachovia together.

25 October: Bethania agrees to purchase its 2,000-acre "town lot" plus an additional 500 acres from the Moravian Church.

1776
15 February: The Patriots' Committee of Safety sends a delegation to inquire how Wachovia stands in the Revolutionary War. Representatives from Bethabara, Bethania, and Salem sign a document declaring the Moravians to be "quiet people" who will "cheerfully" pay their taxes and will not meddle 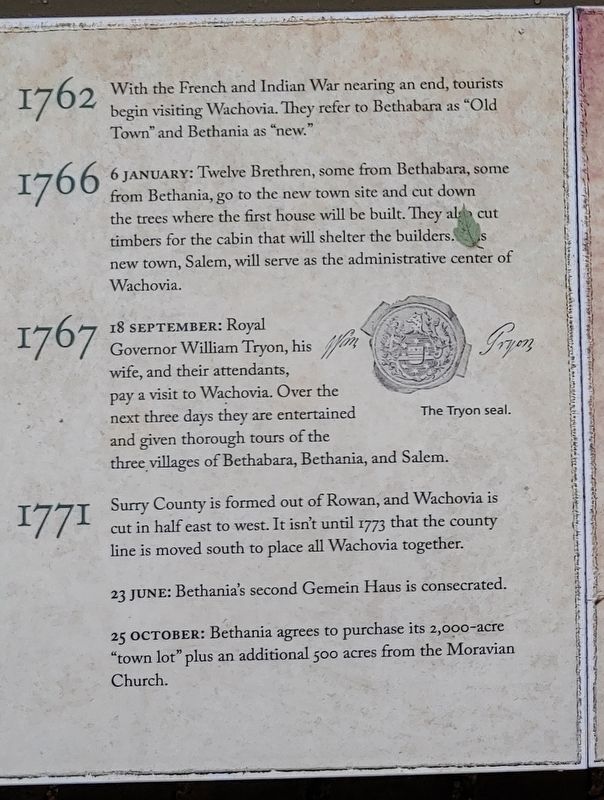 Photographed By Michael C. Wilcox, July 18, 2019
4. Bethania Marker (panel 4)
in politics nor "do anything that shall be detrimental to the good Province we inhabit."

15 March: The British and American armies meet at Guilford Courthouse in the last major battle before Yorktown. The Moravians of Wachovia tend the wounded of both armies.

1783
19 April: The Moravian settlements in Wachovia learn that a peace treaty has been concluded between Great Britain and the United States. It is eight years to the day since the battle at Lexington and Concord.

1783
4 July: In accordance with a proclamation by Governor Alexander Martin, all the Moravian settlements in Wachovia observe a "Day of Solemn %anksgiving to Almighty God" for the restoration of peace. It is the first official observance of the Fourth of July following the American Revolution.

1784
20 August: A mill above Bethania is completed and grain is ground for the first time. The mill has been almost two years in the building.

1789
Surry County is divided with Wachovia in the new Stokes County. The new county seat is Germanton. 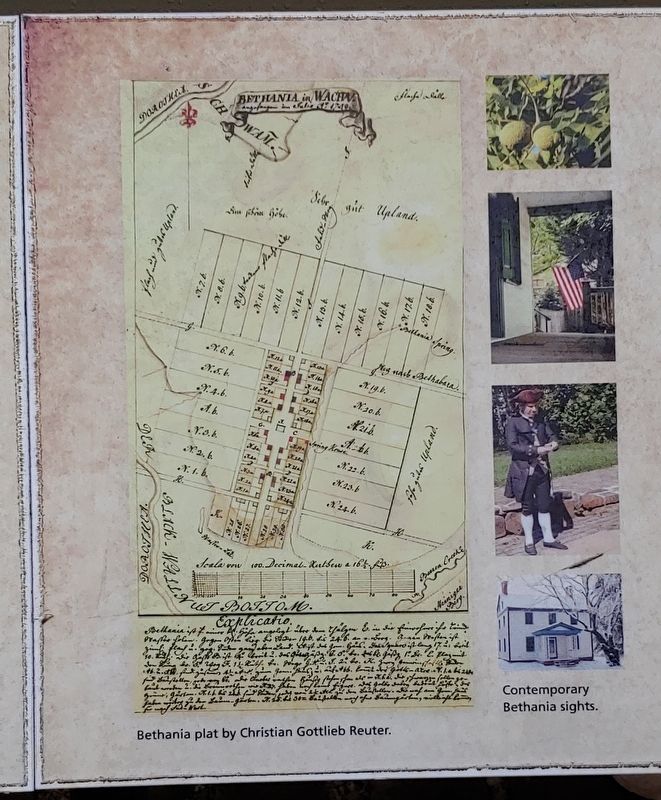 1798
3 February: The Bethania Committee decides to layout a stranger's graveyard at the Bethania mill. The first recorded burial is Ann Margaret Wright, who died 2 April 1800 and was buried the next day. The graveyard's last burial of record will be in 1824.

1822
June: The Moravian Church sells to Christian Loesch the church-owned businesses in Bethania: farm, tannery, distillery, and store. Br. Loesch also buys the land, the first sale of land by the Moravian Church within the Bethania town lot.

14 December: The Moravian Church begins selling the remaining land in the Bethania town lot, but only to individuals and only with approval of the Bethania Church committee.

1831
January: A new North Carolina law eliminates the Moravians' exemption from military service. Rather than protest, Moravians flock to enlist in local 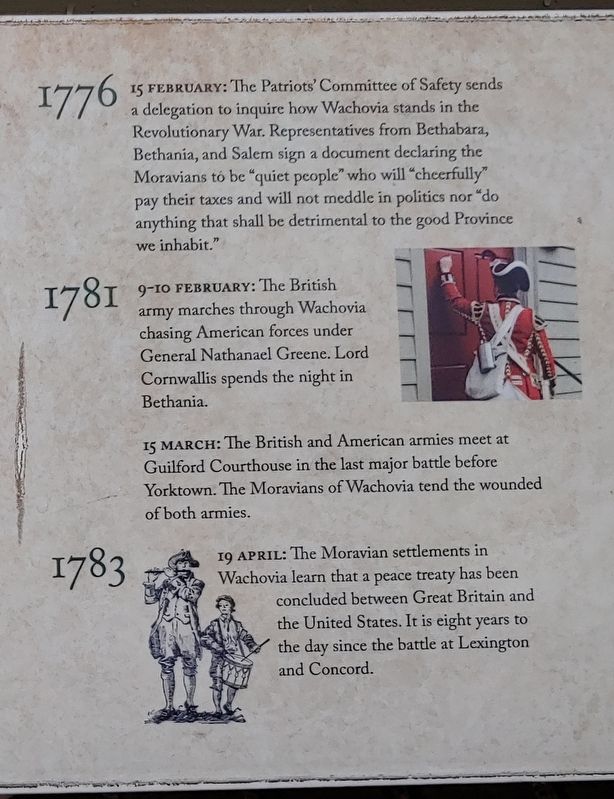 Photographed By Michael C. Wilcox, July 18, 2019
6. Bethania Marker (panel 6)
militias. By February a militia will form in the Bethania area.

1839
3 January: State of North Carolina incorporates the Town of Bethania.

1845
Bethania Negro congregation is formed as a society of the Bethania Moravian congregation when enslaved African Americans begin to hold worship outdoors. On 6 January 1847 Milley dies and is buried in a new graveyard, laid out specifically for this congregation. Years later the congregation takes the name Bethania AME Zion Church.

1849
The state legislature divides the county in which Wachovia is located, carving Forsyth out of the southern half of Stokes County.

1850
Bethania Moravian Reverend Francis Hagen oversees construction and dedication of the first house of worship built for use by the African American congregation in the community, the "Little Log Church." The church is situated beside the African American burial ground.

1861
20 May: A convention in Raleigh declares North Carolina seceded from the Union.

1865
10 April: General Stoneman and Union troops sweep through the Moravian communities in Wachovia. Little is 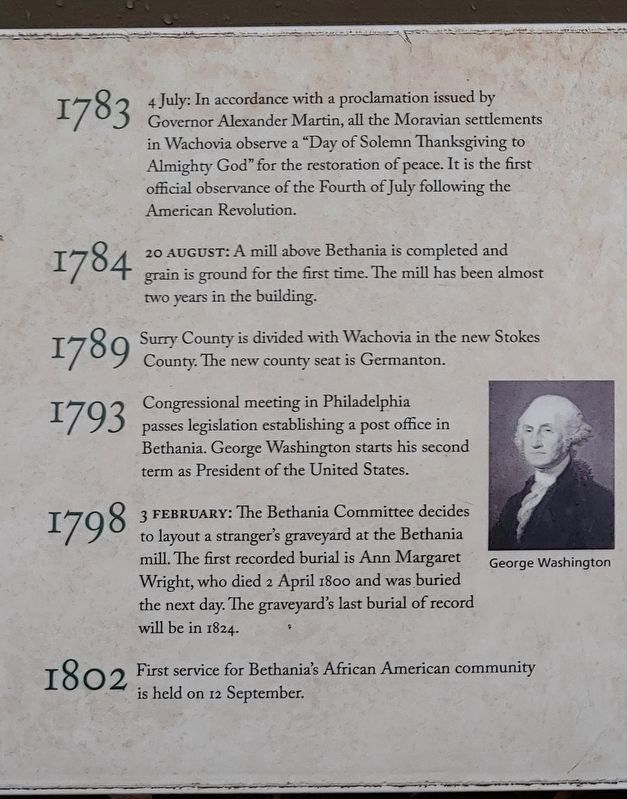 Photographed By Michael C. Wilcox, July 18, 2019
7. Bethania Marker (panel 7)
damaged, though horses are commandeered. Services are cancelled in Bethania for the remainder of Holy Week.

1875
The independent movement to enable African Americans to re-organize their congregation apart from the Moravian church results in the formation of the Bethania African Methodist Episcopal Zion Church, led by African American Reverend A.T. Goslin.

1896
Mizpah is organized and its church is consecrated. Contemporary inhabitants of the Wolff-Moser house, Thomas and Frances Stauber Moser give the land and a "very neat" church is built.

1899
Lehman-Butner Roller Mill is constructed. Mill served the community under different names until it closed in 2007. Renovated into Bethania Mill & Village Shoppes.

1926
Alpha Chapel, north of Bethania, closes. In 1932 Alpha's building is moved to Mizpah for further use. Bethania A.M.E. Zion builds 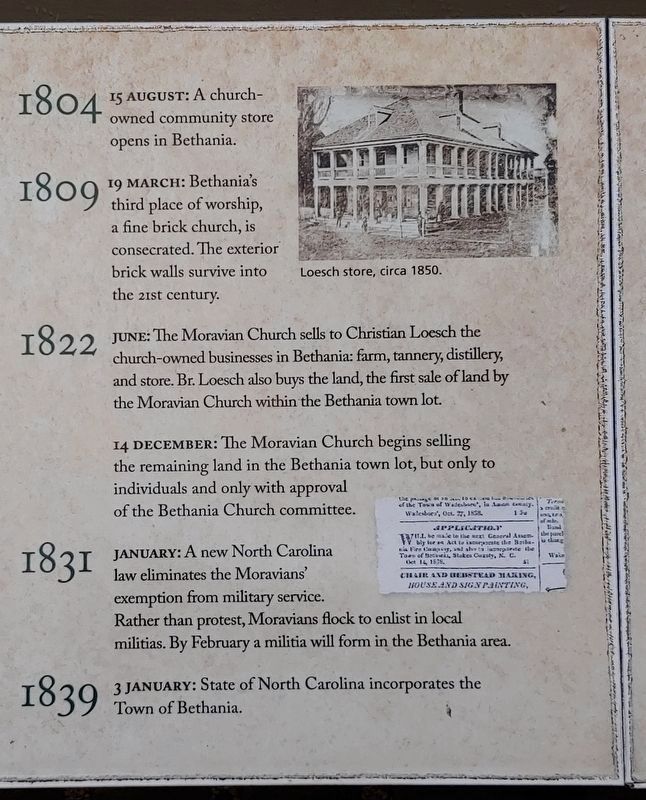 1942
A devastating fire guts the Bethania Moravian Church building destroying its contents, including the c. 1773 Bullitscheck Organ. Only the brick walls remain from the 1809 structure.

1975
Bethania Historic District is listed on the National Register of Historic Places. In 1990, the district is enlarged to 500 acres, and encompasses 180 structures.

2002
Alpha Chapel moved and restored to its current location where it finds further service as the Bethania Town Hall.


Erected by Town of Bethania. 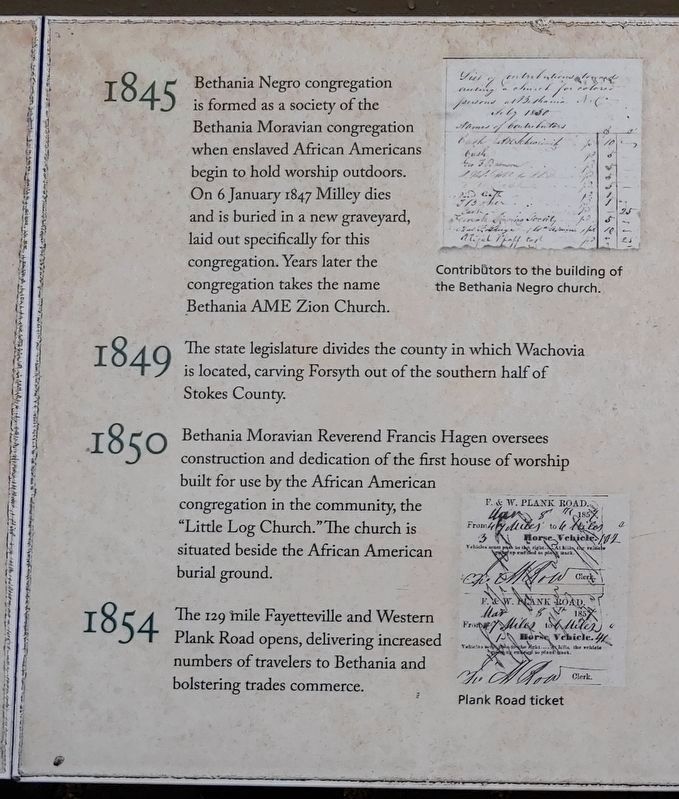 Location. 36° 10.717′ N, 80° 20.332′ W. Marker is in Bethania, North Carolina, in Forsyth County. Marker can be reached from Bethania Road. Located at the Bethania Visitor Center. Touch for map. Marker is at or near this postal address: 5393 Ham Horton Ln, Bethania NC 27010, United States of America. Touch for directions. 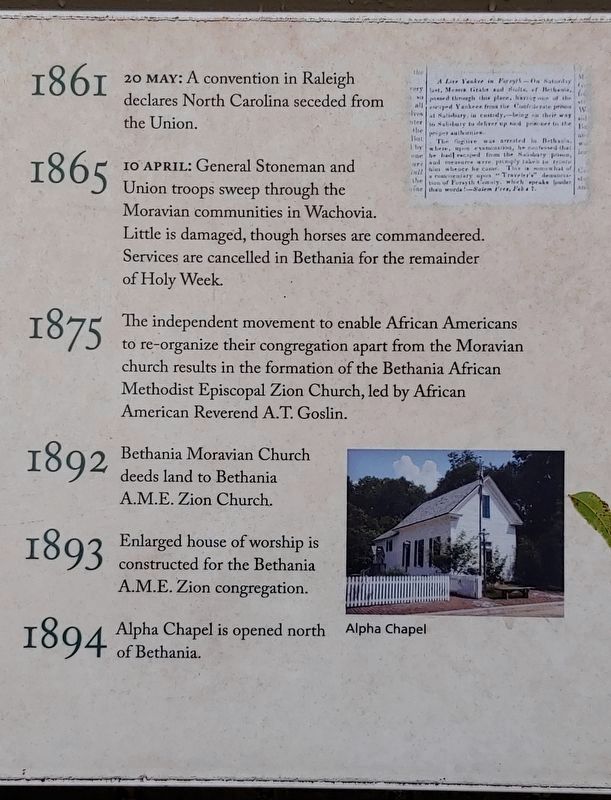 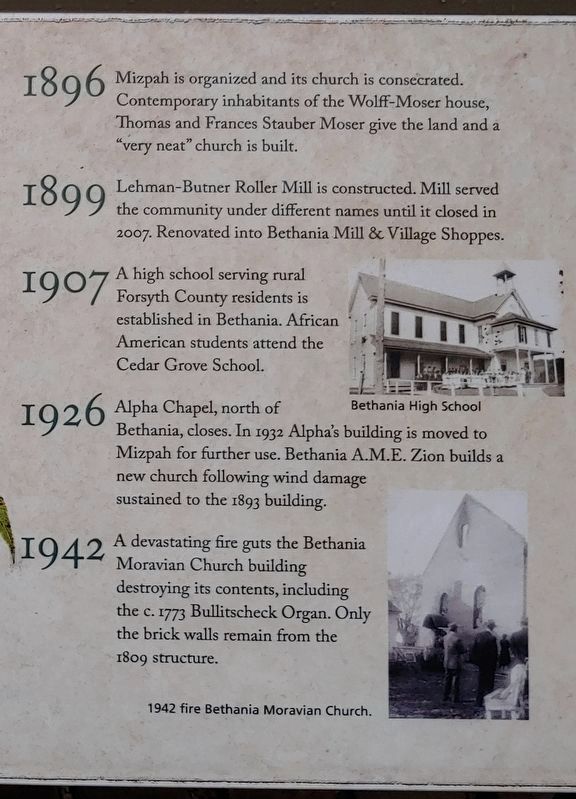 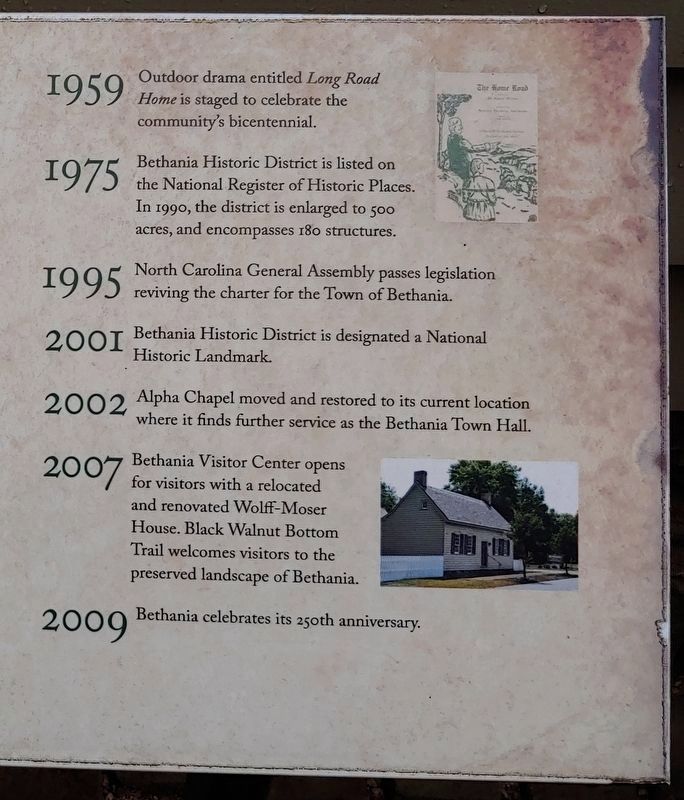 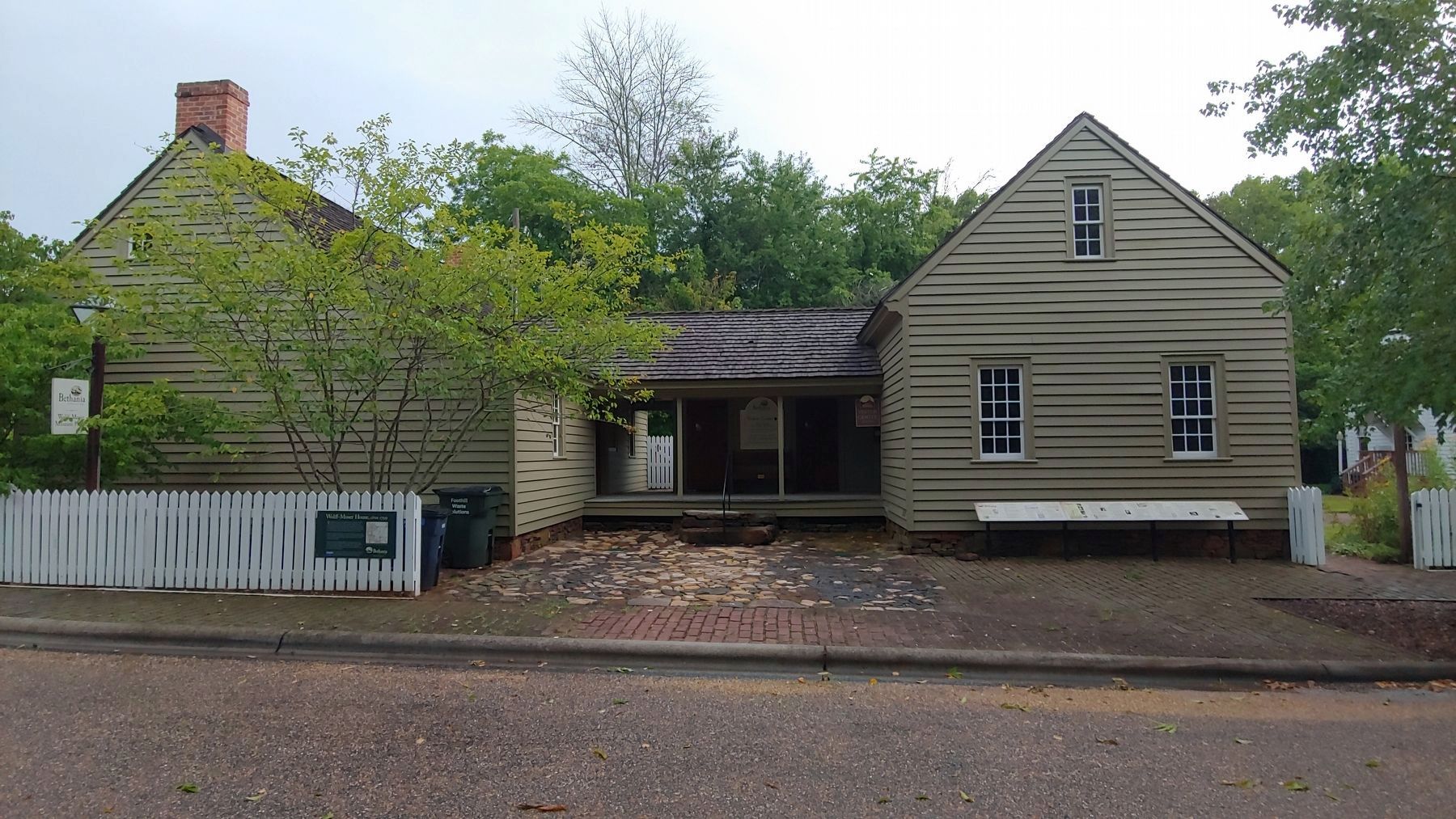 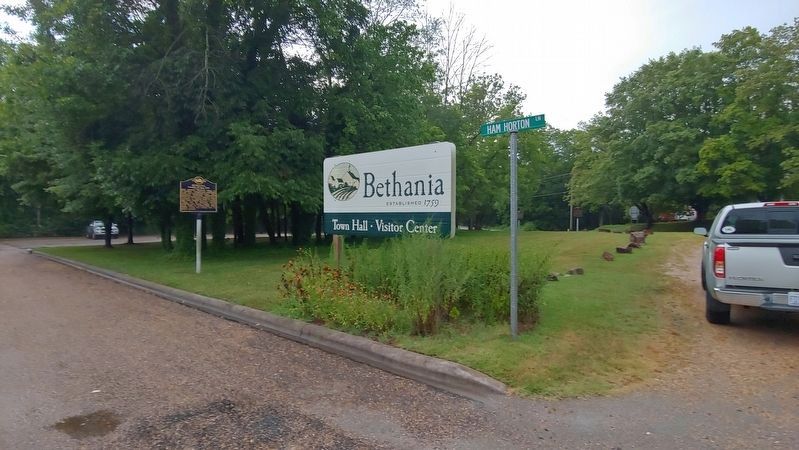