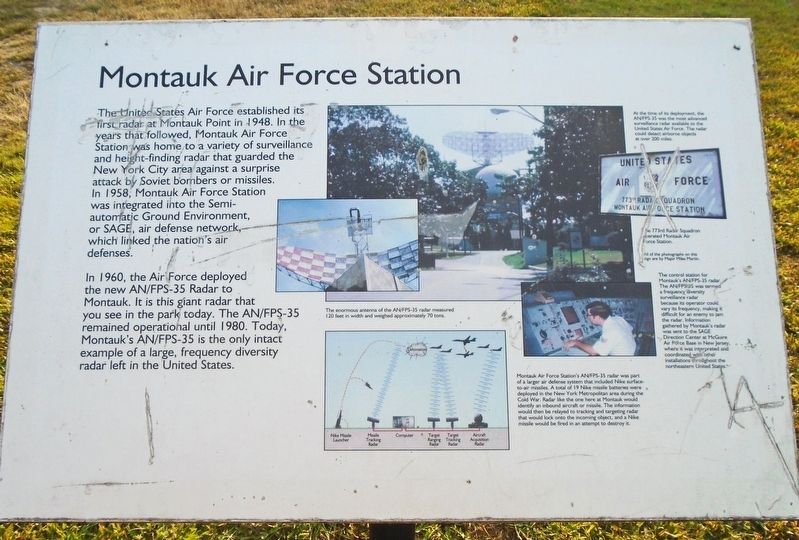 The United States Air Force established its first radar at Montauk Point in 1948. In the years that followed, Montauk Air Force Station was home to a variety of surveillance and height-finding radar that guarded the New York City area against surprise attack by Soviet bombers or missiles. In 1958, Montauk Air Force Station was integrated into the Semi-automatic Ground Environment, or SAGE, air defense network, which linked the nation's air defenses.

In 1960, the Air Force deployed the new AN/FPS-35 Radar to Montauk. It is this giant radar that you see in the park today. The AN/FPS-35 remained operational until 1980. Today, Montauk's AN/FPS-35 is the only intact example of a large, frequency diversity radar left in the United States.

. At the time of its deployment, the AN/FPS-35 was the most advanced surveillance radar available to the United States Air Force. The radar could detect airborne objects at over 200 miles.

. The control station for Montauk's AN/FPS-35 radar. The AN/FPS-35 was termed a frequency diversity surveillance radar because its operator could vary its frequency, making it difficult for an enemy to jam the radar. Information gathered by Montauk's radar was sent to the SAGE Direction Center at McGuire Air Force Base in New Jersey, where it was interpreted and coordinated with other installations throughout the northeastern United States.

. Montauk Air Force Station's AN/FPS-35 radar was part of a larger air defense system that included Nike surface-to-air missiles. A total of 19 Nike missile batteries were deployed in the New York Metropolitan area during the Cold War. Radar like the one here at Montauk would identify an inbound aircraft or missile. The information would then be relayed to tracking and targeting radar that would lock onto the incoming object, and a Nike missile would be fired in an attempt to destroy it.

. The enormous antenna of the AN/FPS-35 radar measured 120 feet in width and weighed approximately 70 tons.

All of the photographs on this sign are by Major Miles Martin. . This historical marker was erected by New York State Parks. It is in Montauk Point in Suffolk County New York