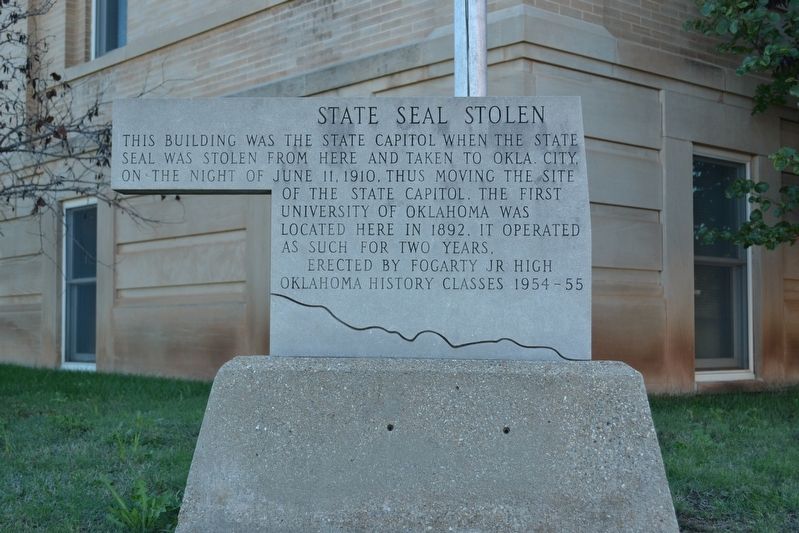 By Michael E Sanchez, Jr., October 8, 2017
1. State Seal Stolen Marker
Inscription.
State Seal Stolen. . This building was the state capitol when the state seal was stolen from here and taken to Oklahoma City, on the night of June 11, 1910, thus moving the site of the state capitol. The first university of Oklahoma was located here in 1892. It operated as such for two years. . This historical marker was erected by Fogarty Jr. High Oklahoma History Classes 1954 -55. It is in Guthrie in Logan County Oklahoma

This building was the state capitol when the state seal was stolen from here and taken to Oklahoma City, on the night of June 11, 1910, thus moving the site of the state capitol. The first university of Oklahoma was located here in 1892. It operated as such for two years.

Topics. This historical marker is listed in these topic lists: Government & Politics • Notable Events. A significant historical date for this entry is June 11, 1910. 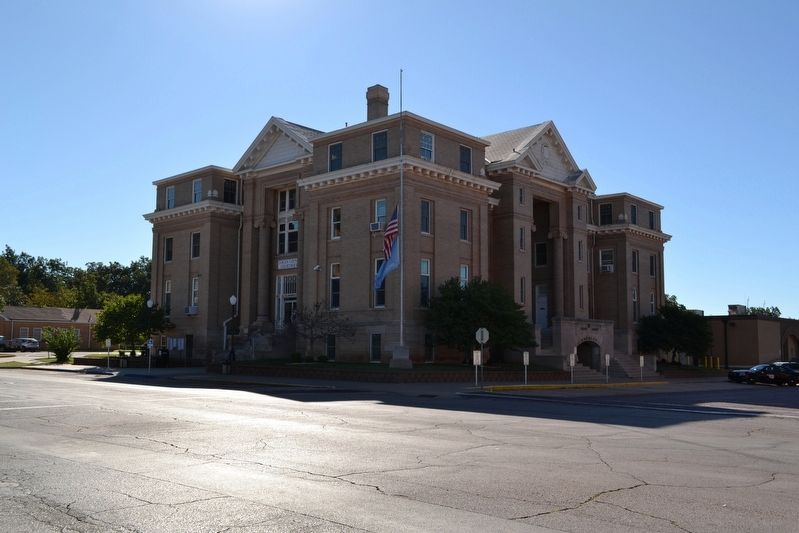 By Michael E Sanchez, Jr., October 8, 2017
2. Logan County Courthouse
The marker can be seen in front of the flag pole.

Also see . . .
1. Was the Oklahoma state seal stolen, or just the true story?. 2010 article by Rob Collins in the Oklahoma Gazette. Excerpt:

Since [Black Oklahoma House of Representative messenger Jim] Noble could freely enter and exit, they asked him to take the seal to Oklahoma City, according to [Waldo B. Phillips’ 1980 article].

“Don’t ride the bus, train or in cars of your friends,” they told Noble, according to Phillips. “Walk, run, hitchhike or hobo. Remember, Jim, you are governor of the state of Oklahoma, and the future of your state depends on you.”

Guards outside the building joked with Noble about the package he carried, asking if he was bringing whiskey to a festive gathering, Phillips wrote. “Yes, a real big party,” Noble replied, according to Phillips.

Noble would never wish to repeat walking and riding 45 minutes to Oklahoma City, according to Phillips. “Each mile was a hazard, for he 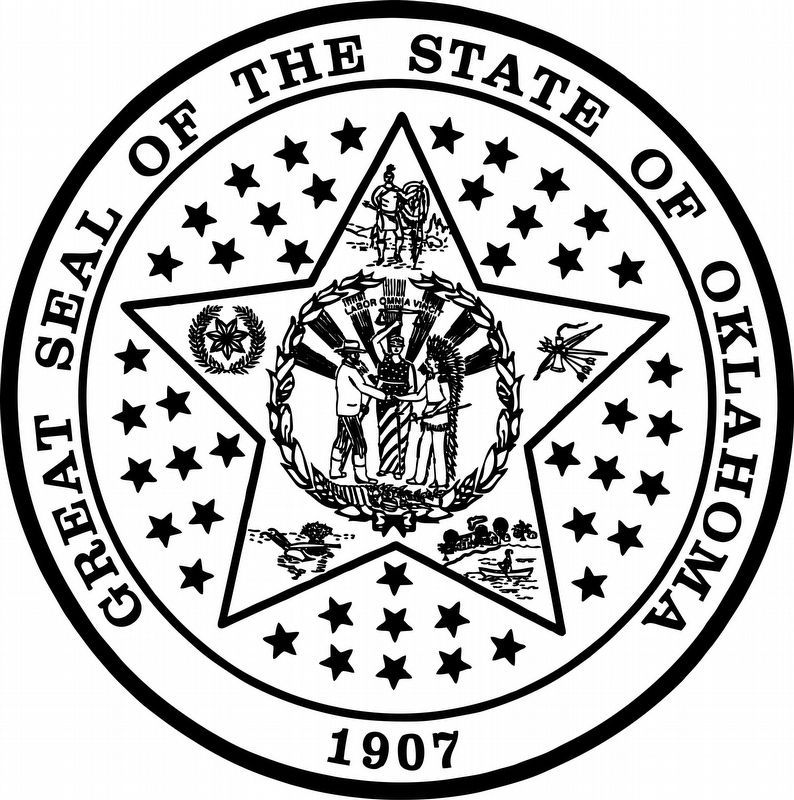 Via Wikimedia Commons
3. Seal of the State of Oklahoma
feared that at any moment he would be discovered and branded a thief,” Phillips wrote. “He knew that the governor would declare his own innocence if Jim were found with the state seal.

"The governor explained to him that he should stand in history among the state's other great men. But Jim knew and understood that he never would.”

A seal is a device for making an impression ... including an embossment on paper, and is also the impression thus made. The original purpose was to authenticate a document... The seal-making device is also referred to as the seal... If the impression is made purely as a relief resulting from the greater pressure on the paper where the high parts of the seal matrix touch, the seal is known as a dry seal; in other cases ink or another liquid or liquefied medium is used, in another color than the paper.