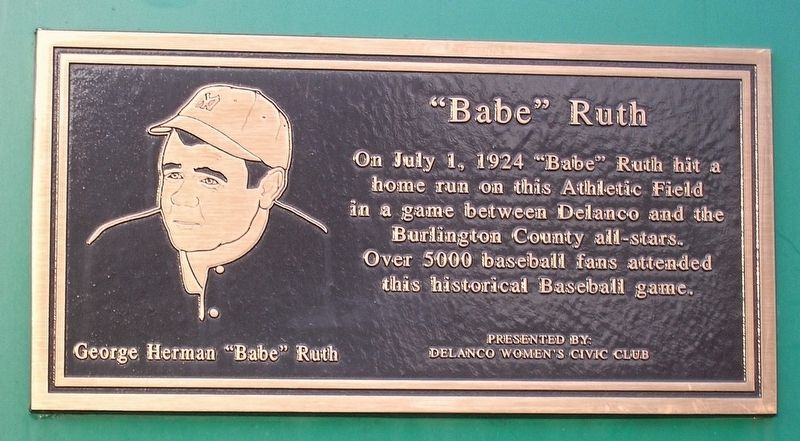 By Peter Fritz, circa 2015
1. "Babe" Ruth Marker
This small historical marker commemorates the largest sporting event in Delanco history, the day George Herman "Babe" Ruth came to Delanco to play an exhibition game. The town has celebrated Babe Ruth Day frequently since 1994 when former mayor, Dick Mueller established the event by proclamation.
Inscription.
"Babe" Ruth. George Herman "Babe" Ruth. . On July 1, 1924, Babe Ruth hit a home run on this Athletic Field in a game between Delanco and the Burlington County All-Stars. Over 5000 baseball fans attended this historical baseball game. . This historical marker was erected by Presented by Delanco Women's Civic Club. It is in Delanco in Burlington County New Jersey

On July 1, 1924, Babe Ruth hit a home run on this Athletic Field in a game between Delanco and the Burlington County All-Stars. Over 5000 baseball fans attended this historical baseball game.

Topics. This historical marker is listed in these topic lists: Parks & Recreational Areas • Sports. A significant historical date for this entry is July 1, 1924.

Location. 40° 3.012′ N, 74° 57.062′ W. Marker is in Delanco, New Jersey, in Burlington County. Marker is at the intersection of Cooper Street and Hickory Street, on the right when traveling north on Cooper Street. The athletic field was dedicated July 4, 1922 and has been in continuous use as a baseball venue in Delanco since that time. Touch for map. Marker is in this post office area: Riverside NJ 08075, United States of America. Touch for directions. 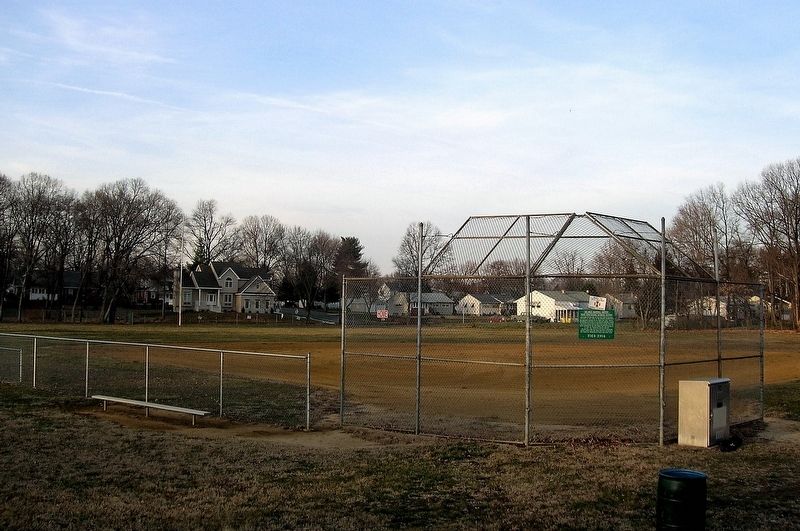 By Peter Fritz, circa 2015
2. Babe Ruth Field
Designated on July 4, 1922 as Delanco Park, an athletic field for baseball, the field was the site of the Babe Ruth exhibition game on July 1, 1924, which forever changed its name to Babe Ruth Field. Newspapers reported 5,000 people attended the game. Babe Ruth hit an over-the-fence home run in the fifth inning, the first fence-clearing homer in the history of the park.

More about this marker. Local sports figure William "Bill" Pence was responsible for the marker.

Regarding "Babe" Ruth. Babe Ruth, who was playing for the New York Yankees in 1924, received special permission to play an exhibition game in the tiny town of Delanco, New Jersey. It was widely advertised and the event became the largest in Delanco history. The Pennsylvania Railroad ran extra trains and newspapers estimated that 5,000 people attended. Babe Ruth played for the Delanco team and the Burlington County All-Stars were engaged to oppose them. Ruth's homer came in the fifth inning. He "socked it a terrific thump and the pellet sailed far and away over the fence in right field, for the first time in the history of Delanco Park. It gave Delanco a 4-2 lead that was thereafter not disputed", according to a newspaper account.
Credits. This page was last revised on October 5, 2019. It was originally submitted on March 24, 2017, by Peter Fritz of Delanco, New Jersey. This page has been viewed 751 times since then and 27 times this year. Last updated on October 4, 2019, by Peter Fritz of Delanco, New Jersey. Photos:   1, 2. submitted on March 24, 2017, by Peter Fritz of Delanco, New Jersey. • J. Makali Bruton was the editor who published this page.
Share This Page.