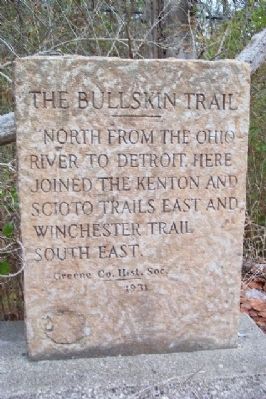 By William Fischer, Jr., November 14, 2008
1. The Bullskin Trail Marker
Inscription.
The Bullskin Trail. . North from the Ohio River to Detroit. Here joined the Kenton and Scioto Trails east and Winchester Trail south east. . This historical marker was erected in 1931 by Greene County Historical Society. It is Near Oldtown in Greene County Ohio

North from the Ohio River to Detroit. Here joined the Kenton and Scioto Trails east and Winchester Trail south east.

Location. 39° 43.476′ N, 83° 56.156′ W. Marker is near Oldtown, Ohio, in Greene County. Marker is on U.S. 68, on the left when traveling south. Marker is between Oldtown and Old Springfield Pike, about one mile north of Xenia and in the Xenia zip code area. Touch for map. Marker is in this post office area: Xenia OH 45385, United States of America. Touch for directions.

Other nearby markers. At least 8 other markers are within 3 miles of this marker, measured as the crow flies. The Sexton Point (a few steps from this marker); Birthplace of Tecumseh (about 700 feet away, measured in a direct line); U Mkvwalamakufewa Tikvmfa / Memorial to Tecumtha (approx. 0.3 miles away); Ten Kentucky Soldiers Memorial (approx. 0.3 miles away); Site of Old Chillicothe 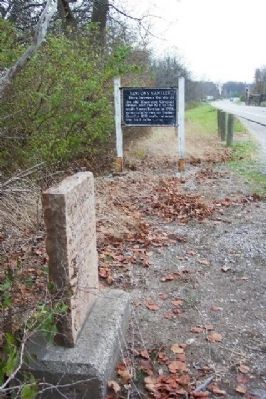