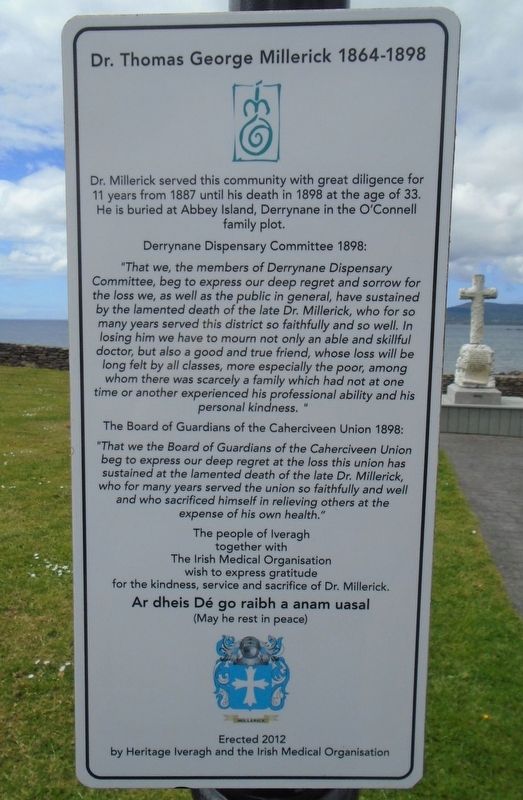 "That we, the members of Derrynane Dispensary Committee, beg to express our deep regret and sorrow for the loss we, as well as the public in general, have sustained by the lamented death of the late Dr. Millerick, who for so many years served this district so faithfully and so well. In losing him we have to mourn not only an able and skillful doctor, but also a good and true friend, whose loss will be long felt by all classes, more especially the poor, among whom there was scarcely a family which had not at one time or another experienced his professional ability and his personal kindness."

The Board of Guardians of the Caherciveeen Union 1898:

"That we the Board of Guardians of the Caherciveen Union beg to express our deep regret at the loss this union has sustained at the lamented death of the late Dr. Millerick, who for many years served the union so faithfully and well and who sacrificed himself in relieving others at the expense of his own health."

The people of Iveragh together with The Irish Medical Organisation wish to express gratitude for the kindness, service and sacrifice of Dr. Millerick.

Millerick [Coat of Arms] -------------- These Gardens are a token of gratitude and affection from many friends in remembrance of T. C. Millerick who for 11 years worked among the people of this district as their doctor and friend. . This historical marker was erected in 2012 by Heritage Iveragh and the Irish Medical Organisation. It is in Waterville in County Kerry Munster Ireland