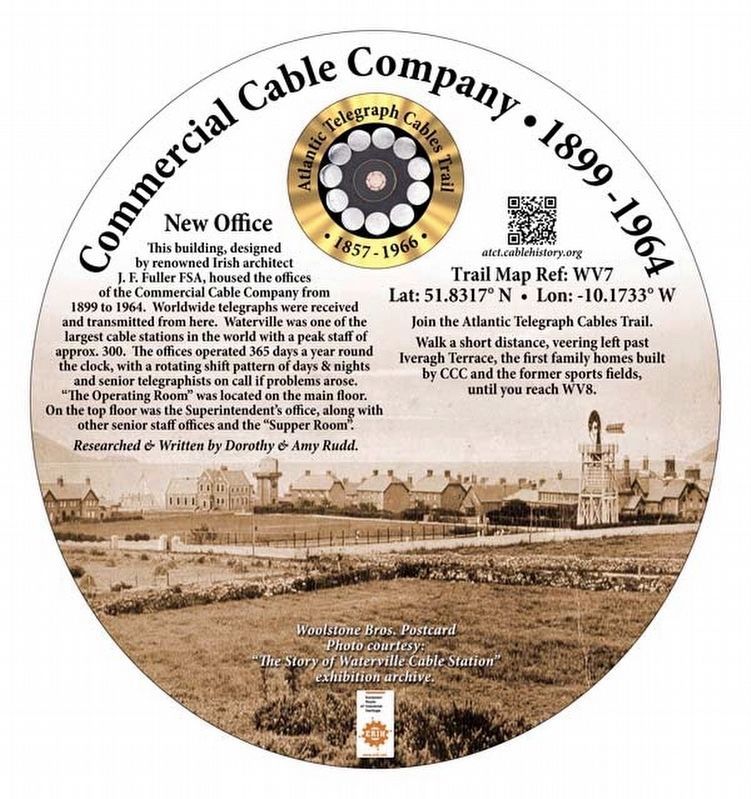 From the Atlantic Telegraph Cables Trail webpage, Undated
1. New Office Marker Image
A Heritage Iveragh / Oidhreacht Uíbh Ráthaigh Project
Inscription.
This building, designed by renowned Irish architect J.F. Fuller FSA, housed the offices of the Commercial Cable Company from 1899 to 1964. Worldwide telegraphs were received and transmitted from here. Waterville was one of the largest cable stations in the world with a peak staff of approx. 300. The offices operated 365 days a year round the clock, with a rotating shift pattern of days & nights and senior telegraphists on call if problems arose. "The Operating Room" was located on the main floor. On the top floor was the Superintendent's office, along with other senior staff offices and the "Supper Room".

Walk a short distance, veering left past Iveragh Terrace, the first family homes built by CCC and the former sports fields, until you reach WV8.. . This historical marker was erected by Heritage Iveragh / Oidhreacht Uíbh Ráthaigh. It is in Waterville in County Kerry Munster Ireland