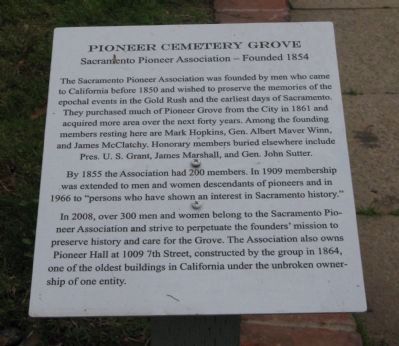 The Sacramento Pioneer Association was founded by men who came to California before 1850 and wished to preserve the memories of the epochal events in the Gold Rush and the earliest days of Sacramento. They purchased much of Pioneer Grove from the City in 1861 and acquired more area over the next forty years. Among the founding members resting here are Mark Hopkins, Gen. Albert Maver Winn, and James McClatchy. Honorary members buried elsewhere include Pres. U.S. Grant, James Marshall, and Gen. John Sutter.
By 1855 the Association had 200 members. In 1909 membership was extended to men and women descendants of pioneers and in 1966 to “persons who have shown an interest in Sacramento history.”
In 2008, over 300 men and women belong to the Sacramento Pioneer Association and strive to perpetuate the founders’ mission to preserve history and care for the Grove. The Association also owns Pioneer Hall at 1009 7th Street, constructed by the group in 1864, one of the oldest buildings in California under the unbroken ownership of one entity. 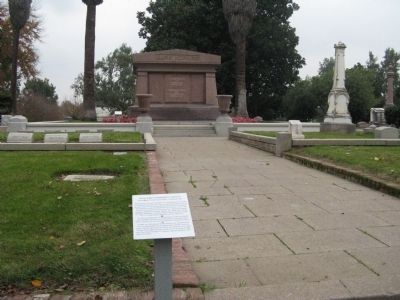 Click or scan to see
this page online
Association.

Topics and series. This historical marker is listed in these topic lists: Cemeteries & Burial Sites • Education • Settlements & Settlers. In addition, it is included in the Former U.S. Presidents: #18 Ulysses S. Grant series list. A significant historical year for this entry is 1850.

Location. This marker has been replaced by another marker nearby. 38° 33.707′ N, 121° 30.183′ W. Marker is in Sacramento, California, in Sacramento County. Marker is located at the Pioneer Grove section of the Old Sacramento City Cemetery in front of the Mark Hopkins Monument. Touch for map. Marker is at or near this postal address: 1000 Broadway, Sacramento CA 95818, United States of America. Touch for directions. 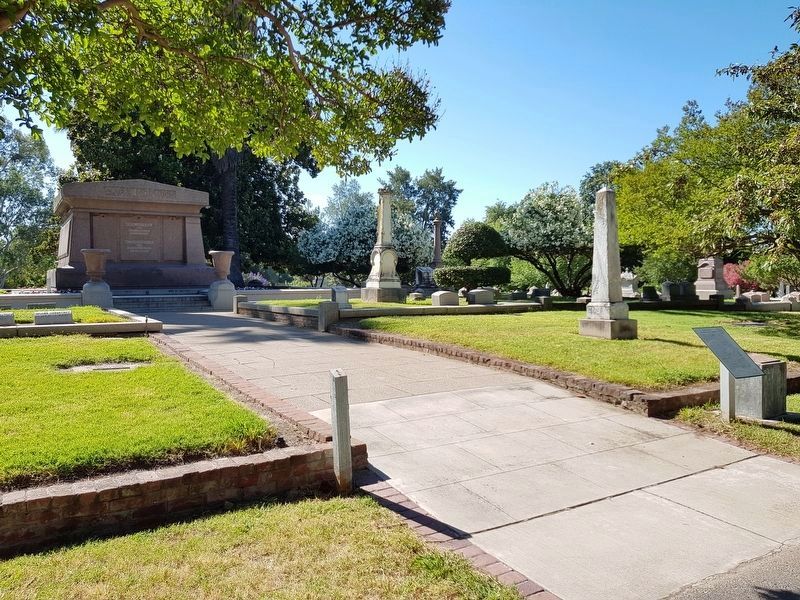 Photographed By J. Makali Bruton, July 2, 2019
3. Pioneer Cemetery Grove Marker
The marker was previously mounted to the white post seen here roughly left of center, although it is currently missing. To the right is a map of the Pioneer Cemetery Grove section and the Mark Hopkins Marker.
Also see the following Nearby Markers for additional information: Mark Hopkins Markers (2), Gen. Albert Maver Winn, Rev. O.C. Wheeler D.D., L.L.D., and another Pioneer Cemetery Grove Marker for additional information.
Credits. This page was last revised on October 5, 2020. It was originally submitted on December 4, 2008, by Syd Whittle of Mesa, Arizona. This page has been viewed 1,157 times since then and 20 times this year. Photos:   1, 2. submitted on December 4, 2008, by Syd Whittle of Mesa, Arizona.   3. submitted on July 7, 2019, by J. Makali Bruton of Querétaro, Mexico.
Share this page.