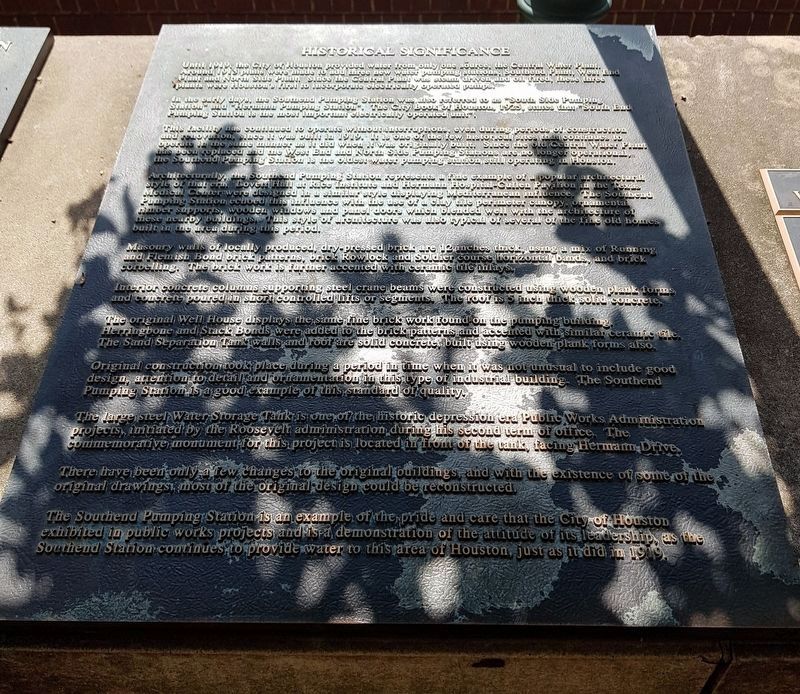 Historical Significance
Until 1919, the City of Houston provided water from only one source, the Central Water Plant. Around 1915 plans were made to add three new water pumping stations: Southend Plant, West End Plant and North Side Plant. Since the Central Plant was steam driven and oil fired, these three plants were Houston’s first to incorporate electricity operated pumps.

This facility has continued to operate without interruptions, even during periods of construction and renovation, since it was built in 1919. It is one of the few historical sites that continues to operate in the same manner as it did when it was originally built. Since the old Central Water Pump has been replaced and the West End and North Side Pumping Stations are no longer operation, the Southend 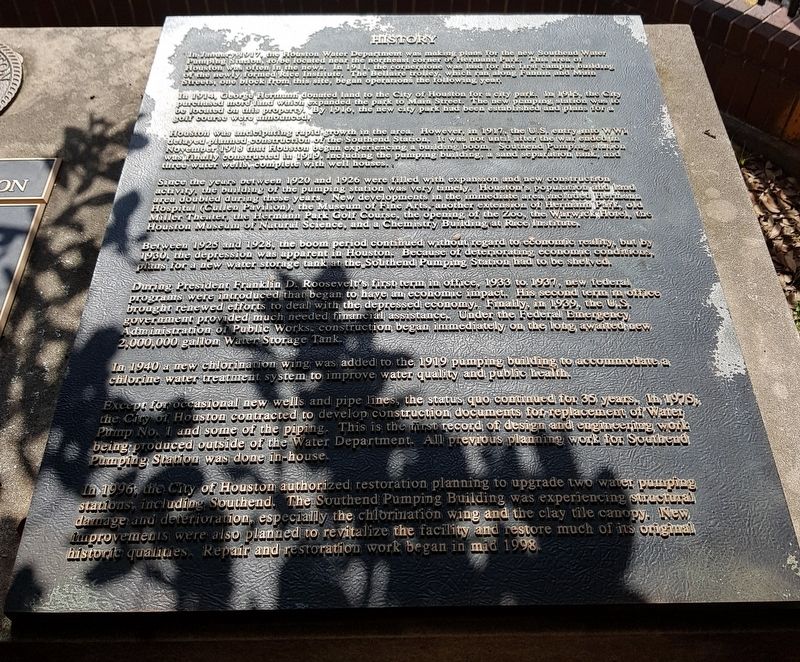 Click or scan to see
this page online
Pumping Station is the oldest water pumping station still operating in Houston.

Architecturally, the Southend Pumping Station represents a fine example of a popular architectural style of that era. Lovett Hall at Rice University Institute and Hermann Hospital-Cullen Pavilion in the Texas Medical Center were designed in a similar style displaying Mediterranean influence. The Southend Pumping Station echoed this influence with the use of a clay tile perimeter canopy, ornamental timber supports, wooden windows and panel doors which blended well with the architecture of these nearby buildings. This style of architecture was also typical of several of the fine old homes built in the area during this period.

The original Well House displays the same fine brick work found on the pumping building. Herringbone and Stack Bonds were added to the brick patterns and accented with similar ceramic tile. The Sand 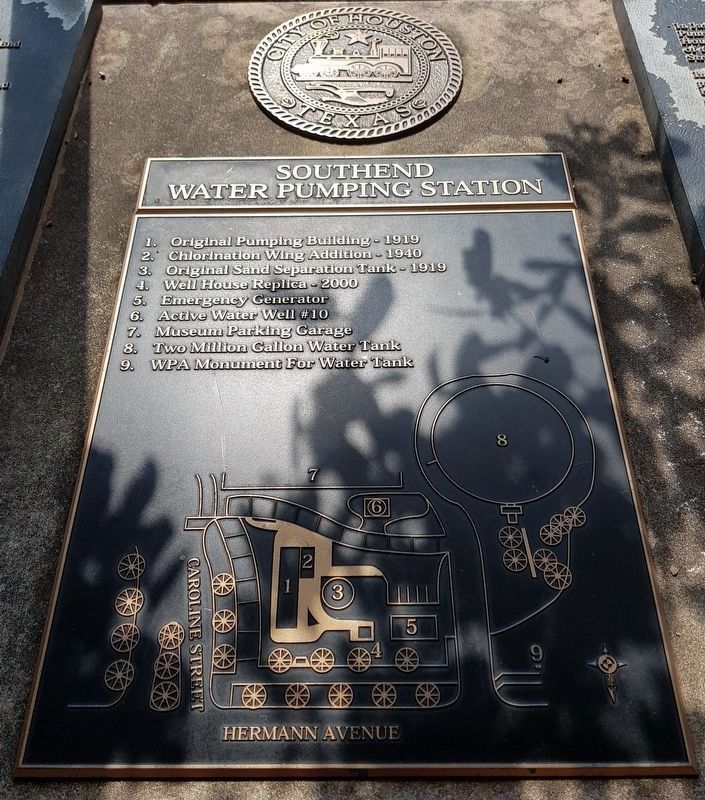 Original construction took place during a period in time when it was not unusual to include good design, attention to detail and ornamentation in this type of industrial building. The Southend Pumping Station is a good example of this standard of quality.

The large steel Water Storage Tank is one of the historic depression era Public Works Administration projects, initiated by the Roosevelt administration during his second term of office. The commemorative monument for this project is located in front of the tank, facing Hermann Drive.

The Southend Pumping Station is an example of the pride and care that the City of Houston exhibited in public works projects and is a demonstration of the attitude of its leadership, as the Southend Station continues to provide water to this area of Houston, just as it did in 1919.

History
In January 1917, the Houston Water Department was making plans for the new Southend Water Pumping Station, to be located near the northeast corner of Hermann Park. This area of Houston was often in the news. In 1911, the cornerstone was laid for the first campus building 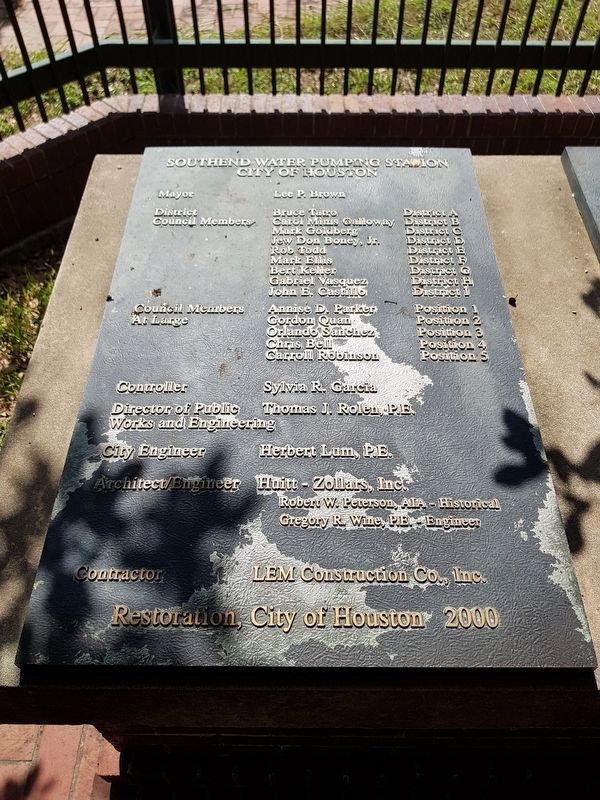 In 1914, George Hermann donated land to the City of Houston for a city park. In 1915, the City purchased more land which expanded the park to Main Street. The new pumping station was to be located on this property. By 1916, the new city park had been established and plans for a golf course were announced.

Houston was anticipating rapid growth in the area. However, in 1917, the U.S. entry into WWI delayed planned construction of the Southend Station. It was not until after the war ended in November 1918 that Houston began experiencing a building boom. Southend Pumping Station was finally constructed in 1919, including the pumping building, a sand separation tank, and three water wells, complete with well houses.

Since the years between 1920 and 1926 were filled with expansion and new construction activity, the building of the pumping station was very timely. Houston’s population and land area doubled during these years. New developments in the immediate area included Hermann Hospital (Cullen Pavilion), the Museum of Fine Arts, another extension of Hermann Park, old Miller Theater, the Hermann Park Golf Course, the opening of the Zoo, the Warwick Hotel, the Houston Museum of Natural Science, and a 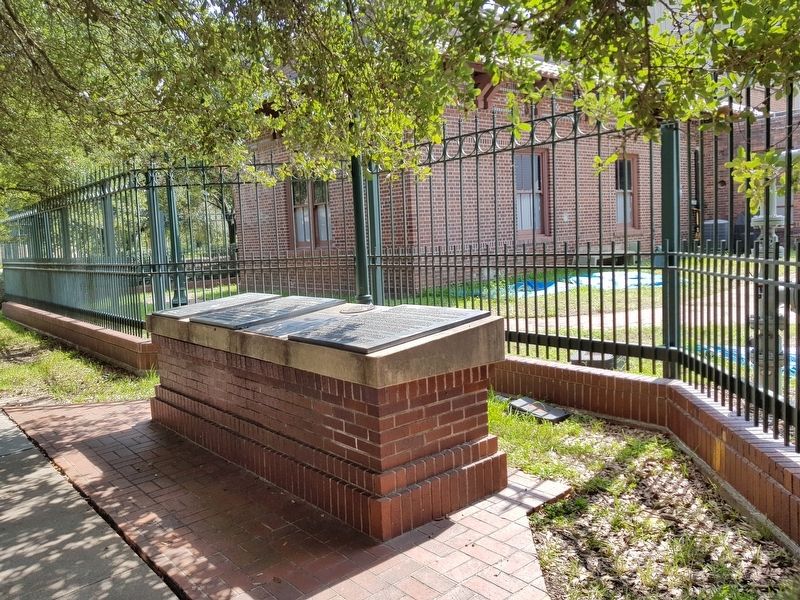 Between 1925 and 1928, the boom period continued without regard to economic reality, but by 1930, the depression was apparent in Houston. Because of deteriorating economic conditions, plans for a new water storage tank at the Southend Pumping Station had to be shelved.

During Franklin D. Roosevelt’s first term in office, 1933 to 1937, new federal programs were introduced that began to have an economic impact. His second term in office brought renewed efforts to deal with the depressed economy. Finally, in 1939, the U.S. government provided much needed financial assistance. Under the Federal Emergency Administration of Public Works, construction began immediately on the long awaited new 2,000,000 gallon Water Storage Tank.

In 1940 a new chlorination wing was added to the 1919 pumping building to accommodate a chlorine water treatment system to improve water quality and public health.

Except for occasional new wells and pipe lines, the status quo continued for 35 years. In 1974, the City of Houston contracted to develop construction documents for replacement of Water Pump No. I and some of the piping. This is the first record of design and engineering work being produced outside of the Water Department. All previous planning work for Southend Pumping Station was done in-house. 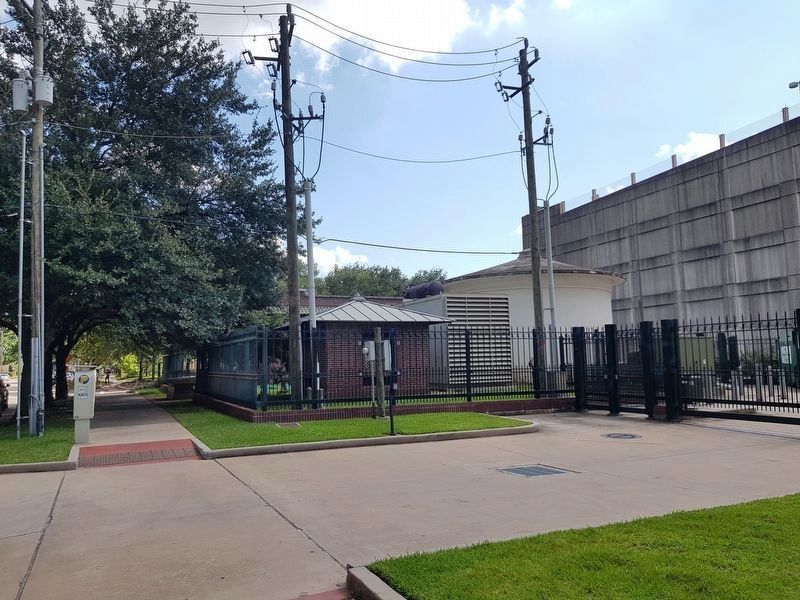 Photographed By J. Makali Bruton, October 6, 2019
6. Southend Water Pumping Station and Marker
The marker can be seen to the left in this view south down Hermann Drive. To the right can be seen the Well House Replica, Emergency Generator and the Original Sand Separation Tank.
authorized restoration planning to upgrade two water pumping stations, including Southend. The Southend Pumping Building was experiencing structural damage and deterioration, especially the chlorination wing and the clay tile canopy. New improvements were also planned to revitalize the facility and restore much of its original historic qualities. Repair and restoration work began in mid 1998. 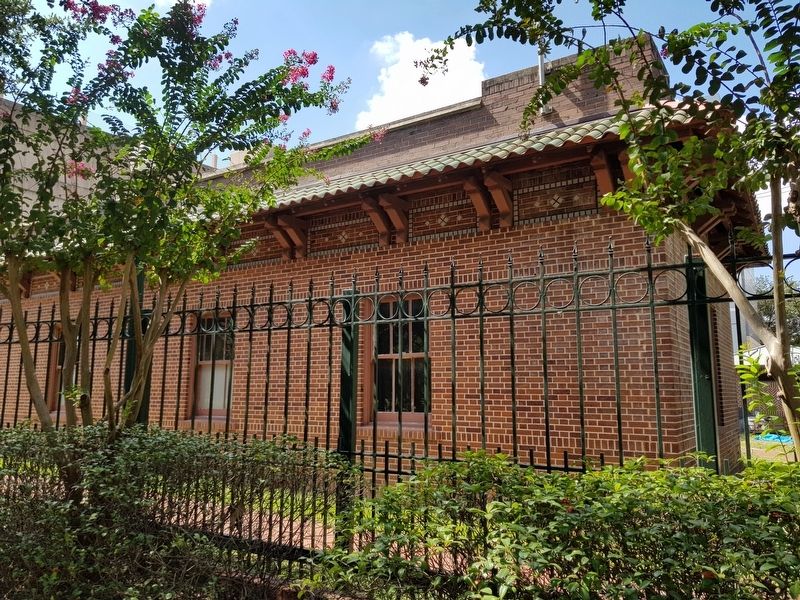