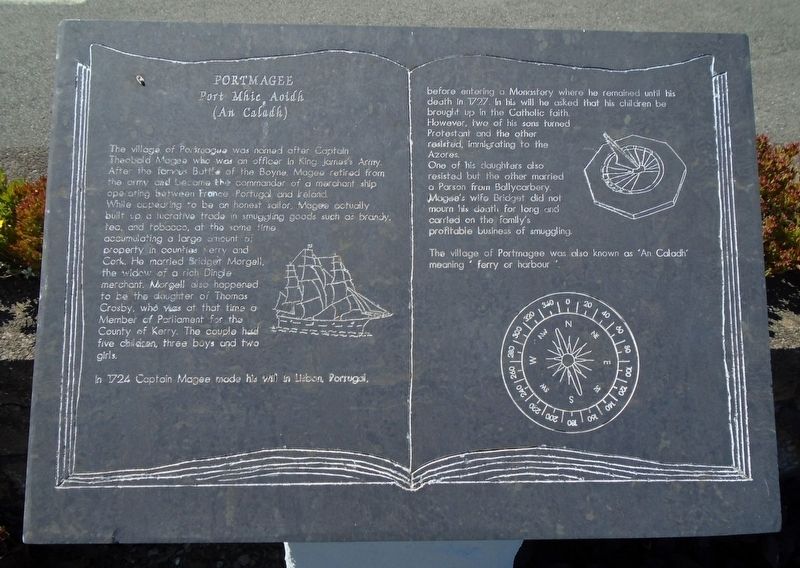 The village of Portmagee was named after Captain Theobald Magee who was an officer in King James's Army. After the famous Battle of the Boyne, Magee retired from the army and became the commander of a merchant ship operating between France, Portugal and Ireland. While appearing to be an honest sailor, Magee actually built up a lucrative trade in smuggling goods such as brandy, tea, and tobacco, at the same time accumulating a large amount of property in counties Kerry and Cork. He married Bridget Morgell, the widow of a rich Dingle merchant. Morgell also happened to be the daughter of Thomas Crosby, who was at that time a Member of Parliament for the County of Kerry. The couple had five children, three boys and two girls.

In 1724 Captain Magee made his will in Lisbon, Portugal, before entering a Monastery where he remained until his death in 1727. In his will he asked that his children be brought up in the Catholic faith. However, two of his sons turned Protestant and the other resisted, immigrating to the Azores. One of his daughters also resisted but the other married a Parson from Ballycarbery. Magee's wife Bridget did not mourn his death for long and carried on the family's profitable business of smuggling.

The village of Portmagee was also known as 'An Caladh' meaning 'ferry or harbour'. . This historical marker is in Portmagee in County Kerry Munster Ireland