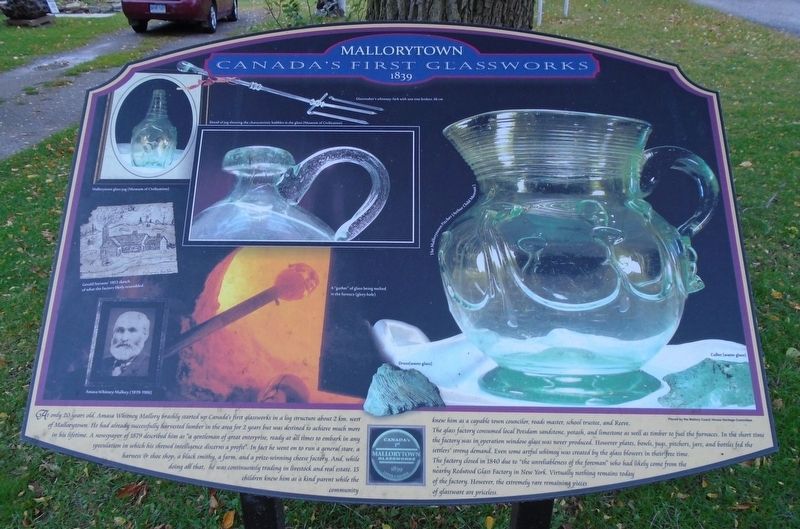 At only 20 years old, Amasa Whitney Mallory brashly started up Canada's first glassworks in a log structure about 2 km. west of Mallorytown. He had already successfully harvested lumber in the area for 2 years but was destined to achieve much more in his lifetime. A newspaper of 1879 described him as "a gentleman of great enterprise, ready at all times to embark in any speculation in which his shrewd intelligence discerns a profit". In fact he went on to run a general store, a harness & shoe shop, a black smithy, a farm, and a prize-winning cheese factory. And, while doing all that, he was continuously trading in livestock and real estate. 15 children knew him as a kind parent while the community knew him as a capable town councilor, roads master, school trustee, and Reeve.

The glass factory consumed local Potsdam sandstone, potash, and limestone as well as timber to fuel the furnaces. In the short time the factory was in operation window glass was never produced. However plates, bowls, jugs, pitchers, jars, and bottles fed the settlers' strong demand. Even some artful whimsy was created by the glass blowers in their free time. The factory closed in 1840 due to "the unreliableness of the foreman" who had likely come from the nearby Redwood Glass Factory in New York. Virtually nothing remains today of the factory. However, the extremely rare remaining pieces of glassware are priceless.

. Detail of jug showing the characteristic bubbles in the glass

. A "gather" of glass being melted in the furnace (glory hole)

. Gerald Stevens' 1953 sketch of what the factory likely resembled . This historical marker was erected in 2012 by Mallory Coach House Heritage Committee. It is in Mallorytown in Leeds and Grenville United Counties Ontario