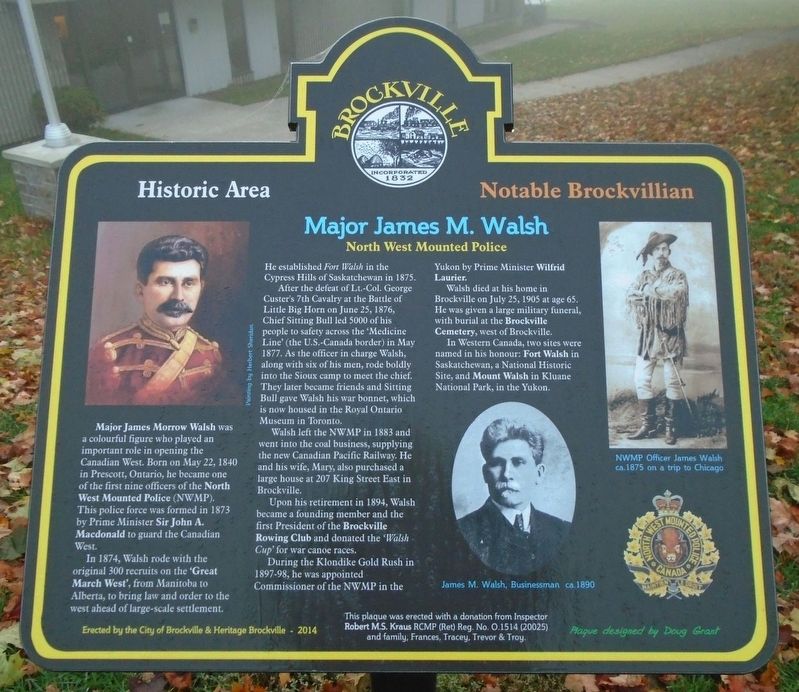 Major James Morrow Walsh was a colourful figure who played an important role in opening the Canadian West. Born on May 22, 1840 in Prescott, Ontario, he became one of the first nine officers of the North West Mounted Police (NWMP). This police force was formed in 1873 by Prime Minister Sir John A. Macdonald to guard the Canadian West.

In 1874, Walsh rode with the original 300 recruits on the 'Great March West', from Manitoba to Alberta, to bring law and order to the west ahead of large-scale settlement. He established Fort Walsh in the Cypress Hills of Saskatchewan in 1875.

After the defeat of Lt.-Col. George Custer's 7th Cavalry at the Battle of the Little Big Horn on June 25, 1876, Chief Sitting Bull led 5000 of his people to safety across the 'Medicine Line' (the U.S.-Canada border) in May 1877. As the officer in charge Walsh, along with six of him men, rode boldly into the Sioux camp to meet the chief. They later became friends and Sitting Bull gave Walsh his war bonnet, which is now housed in the Royal Ontario Museum in Toronto.

Walsh left the NWMP in 1883 and went into the coal business, supplying the new Canadian Pacific Railway. He and his wife, Mary, also purchased a large house at 207 King Street East in Brockville.

Upon his retirement in 1894, Walsh became a founding member and the first President of the Brockville Rowing Club and donated the 'Walsh Cup' for war canoe races.

During the Klondike Gold Rush in 1897-98, he was appointed Commissioner of the NWMP in the Yukon by Prime Minister Wilfrid Laurier.

Walsh died at his home in Brockville on July 25, 1905 at age 65. He was given a large military funeral, with burial at the Brockville Cemetery, west of Brockville.

In Western Canada, two sites were named in his honour: Fort Walsh in Saskatchewan, a National Historic Site, and Mount Walsh in Kluane National Park, in the Yukon.

. NWMP Officer James Walsh ca.1875 on a trip to Chicago . This historical marker was erected in 2014 by City of Brockville, Heritage Brockville, and Inspector Robert M.S. Kraus, RCMP, and family. It is in Brockville in Leeds and Grenville United Counties Ontario