The Defense of Dogan Ridge 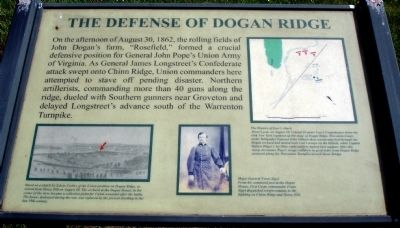 June 16, 2007
1. The Defense of Dogan Ridge Marker
Inscription.
The Defense of Dogan Ridge. . On the afternoon of August 30, 1862, the rolling fields of John Dogan’s farm, “Rosefield,” formed a crucial defensive position for General John Pope’s Union Army of Virginia. As General James Longstreet’s Confederate attack swept onto Chinn Ridge, Union commanders here attempted to stave off impending disaster. Northern artillerists, commanding more than 40 guns along the ridge, dueled with Southern gunners near Groveton and delayed Longstreet’s advance south of the Warrenton Turnpike. . This historical marker is Near Manassas in Prince William County Virginia

Location. 38° 49.049′ N, 77° 32.09′ W. Marker is near Manassas, Virginia, in Prince William County. Marker can be reached from Warrenton Turnpike (U.S. 29), on the right when traveling west. Located in the Manassas National Battlefield Park at the end of a private (National Park Service) driveway extending northwest from the Warrenton Turnpike (U.S Route 29). Touch for map. Marker is in this post office area: Manassas VA 20109, United States of America. Touch for directions.

Other nearby markers. At least 8 other markers are within walking distance of this marker. Federal Artillery Positions (approx. 0.3 miles away); Retreat from Chinn Ridge 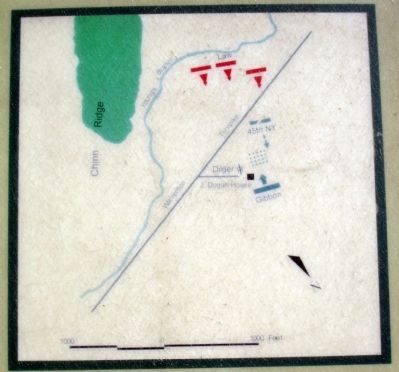 More about this marker. On the lower left of the marker is a sketch captioned, Based on a sketch by Edwin Forbes of the Union position on Dogan Ridge, as viewed from Henry Hill on August 30. The orchard at the Dogan House, in the center of the view, became a collection point for Union wounded after the battle. The house, destroyed during the war, was replaced by the present building in the late 19th century.

On the lower middle of the marker is a portrait captioned, Major General Franz Sigel
From his command post at Dogan House, First Corps commander Franz Sigel dispatched reinforcements to the fighting on Chinn Ridge and Henry Hill.

On the upper right of the marker is a map captioned, The Repulse of Law’s Attack
About 6 p.m. on August 30, Colonel Evander Law’s Confederates drove the 45th New York regiment up the slope of Dogan Ridge. Wisconsin troops under Brigadier General John Gibbon then counterattacked through the Dogan orchard and turned back Law’s troops on the hillside, while Captain Hubert Dilger’s 1st Ohio Light artillery battery lent support. After this sharp encounter, Pope’s troops withdrew in good order from Dogan Ridge eastward along the Warrenton Turnpike toward Stone Bridge. 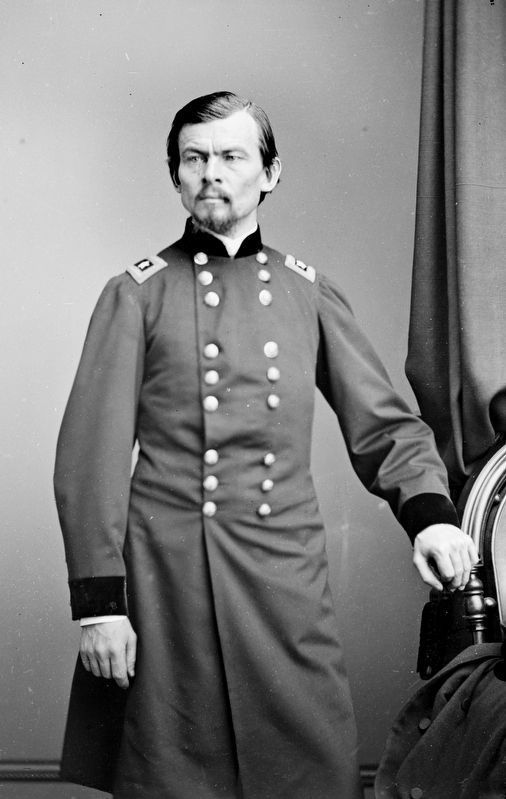 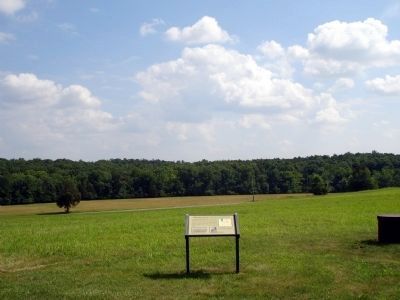 June 16, 2007
4. The Defense of Dogan Ridge Marker
Looking southwest from the crest of Dogan Ridge overlooking the Warrenton Turnpike (U.S. Route 29) about 80 yards to the south. 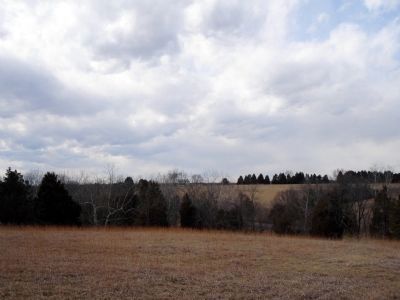