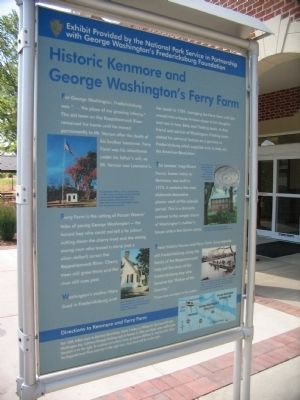 (Front):
Historic Kenmore and George Washington's Ferry
For George Washington, Fredericksburg was "...the place of my growing infancy." The old town on the Rappahannock River remained his home until he moved permanently to Mt. Vernon after the death of his brother Lawrence. Ferry Farm was his inheritance under his father's will, as Mt. Vernon was Lawrence's.

Ferry Farm is the setting of Parson Weems' tales of young George Washington - the honest boy who could not tell as lie (about cutting down the cherry tree) and the strong young man who tossed a stone (not a silver dollar!) across the Rappahannock River. Cherry trees still grow there and the river still runs past.

Washington's mother Mary lived in Fredericksburg until her death in 1789, managing the Ferry Farm until she moved into a house in town closer to her daughter and son-in-law, Betty and Fielding Lewis. A close friend and advisor of Washington, Fielding Lewis staked his personal fortune on a gunnery of Fredericksburg which supplied arms to help win the American Revolution.

The Lewises' magnificent house, known today as Kenmore, was built 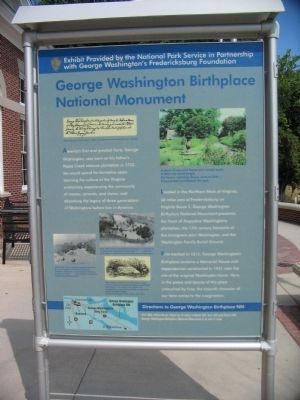 Click or scan to see
this page online
in 1775. It contains the most elaborate decorative plaster work of the colonial period. This is a dramatic contrast to the simple charm of Washington's mother's house only a few blocks away.

These historic houses and Ferry Farm, lying opposite old Fredericksburg along the banks of the Rappahannock, help tell the story of the Fredericksburg boy who became the "Father of His Country."
These sites are open to the public.

(Back):
George Washington Birthplace National Monument
America's first and greatest hero, George Washington, was born on his father's Popes Creek tobacco plantation in 1732. He would spend his formative years learning the culture of the Virginia aristocracy, experiencing the community of master, servants, and slaves, and absorbing the legacy of three generations of Washingtons before him in America.

First marked in 1815, George Washington's Birthplace contains a Memorial House and dependencies constructed in 1931 near the site of the original Washington home. Here, in the peace and beauty of this place untouched by time, 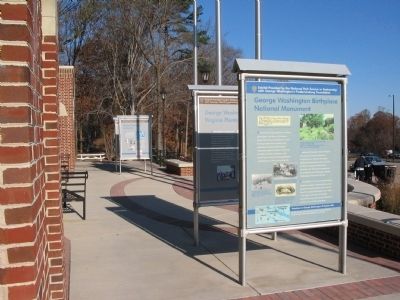 Photographed By Craig Swain
3. One in a Set of Marker at the Welcome Center
the stanch character of our hero comes to imagination.

Erected by National Park Service in partnership with the George Washington's Fredericksburg Foundation.

Topics and series. This historical marker is listed in this topic list: Colonial Era. In addition, it is included in the Former U.S. Presidents: #01 George Washington series list. A significant historical year for this entry is 1789.

Location. 38° 18.989′ N, 77° 30.297′ W. Marker is near Fredericksburg, Virginia. Marker is on Interstate 95, on the right when traveling south. Located in front of the Fredericksburg Rest Stop / Welcome Center on I-95 south bound, just past the Rappahannock River bridge. Touch for map. Marker is at or near this postal address: 400 Bragg Hill Dr, Fredericksburg VA 22401, United States of America. Touch for directions.