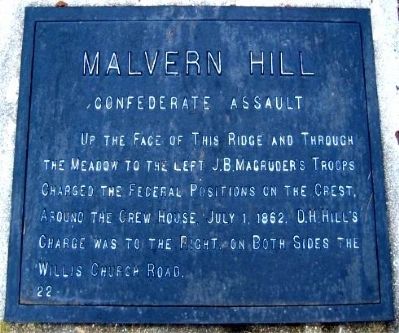 By Bernard Fisher, July 5, 2003
1. Malvern Hill Marker
Inscription.
Malvern Hill. Confederate Assault. Up the face of this ridge and through the meadow to the left J.B. Magruder's troops charged the Federal positions on the crest, around the Crew House, July 1, 1862. D.H. Hill's charge was to the right, on both sides of the Willis Church Road. . This historical marker was erected by Battlefield Markers Association. It is Near Richmond in Henrico County Virginia

Up the face of this ridge and through the meadow to the left J.B. Magruder's troops charged the Federal positions on the crest, around the Crew House, July 1, 1862. D.H. Hill's charge was to the right, on both sides of the Willis Church Road.

Topics and series. This historical marker is listed in this topic list: War, US Civil. In addition, it is included in the Virginia - D.S. Freeman (Richmond Battlefields) series list. A significant historical date for this entry is July 1, 1845.

Location. 37° 24.798′ N, 77° 15.207′ W. Marker is near Richmond, Virginia, in Henrico County. Marker can be reached from Willis Church Road (Virginia Route 156), on the right when traveling south. Located along the walking trail west of the Crew House within the Malvern Hill unit of the Richmond National Battlefield Park. Touch for map. Marker is at or near this postal address: 9170 Willis Church Rd, Henrico VA 23231, United States of America. Touch for directions. 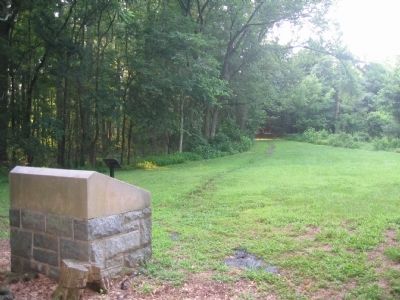 Additional commentary.
1. Malvern Hill, by Herman Melville
Ye elms that wave on Malvern Hill
In prime of morn and May,
Recall ye how McClellan’s men
Here stood at bay?
While deep within yon forest dim
Our rigid comrades lay—
Some with the cartridge in their mouth,
Others with fixed arms lifted South—
Invoking so
The cypress glades? Ah wilds of woe!

The spires of Richmond, late beheld
Through rifts in musket-haze,
Were closed from view in clouds of dust
On leaf-walled ways,
Where streamed our wagons in caravan;
And the Seven Nights and Days
Of march and fast, retreat and fight,
Pinched our grimed faces to ghastly plight—
Does the elm wood
Recall the haggard beards of blood?

The battle-smoked flag, with stars eclipsed,
We followed (it never fell!)—
In silence 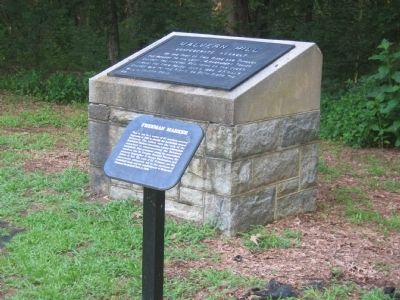 By Bernard Fisher, July 5, 2003
3. Malvern Hill Marker
husbanded our strength—
Received their yell;
Till on this slope we patient turned
With cannon ordered well;
Reverse we proved was not defeat;
But ah, the sod what thousands meet!—
Does Malvern Wood
Bethink itself, and muse and brood?

We elms of Malvern Hill
Remember every thing;
But sap the twig will fill:
Wag the world how it will,
Leaves must be green in Spring. 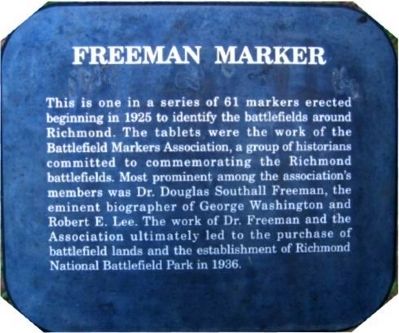