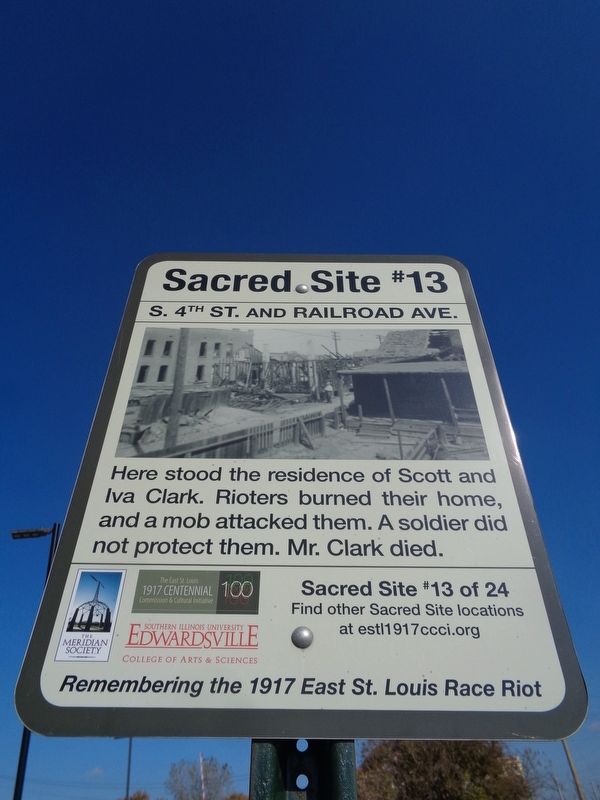 By Jason Voigt, November 5, 2019
1. S. 4th St. and Railroad Ave. Marker
Inscription.
S. 4th St. and Railroad Ave.. Remembering the 1917 East St. Louis Race Riot. Here stood the residence of Scott and Iva Clark. Rioters burned their home, and a mob attacked them. A soldier did not protect them. Mr. Clark died. . This historical marker was erected in 2017 by The East St. Louis 1917 Centennial Commission and Cultural Initiative, the Meridian Society, and Southern Illinois University Edwardsville. It is in East St. Louis in St. Clair County Illinois

Here stood the residence of Scott and Iva Clark. Rioters burned their home, and a mob attacked them. A soldier did not protect them. Mr. Clark died.

Topics and series. This historical marker is listed in these topic lists: African Americans • Notable Events. In addition, it is included in the Illinois, Remembering the 1917 East St. Louis Race Riot series list. A significant historical month for this entry is July 1917.

Location. 38° 37.428′ N, 90° 9.812′ W. Marker is in East St. Louis, Illinois, in St. Clair County. Marker is at the intersection of Barack Obama Avenue and Railroad Avenue, on the right when traveling north on Barack Obama Avenue. It is nearby Southern Illinois University Edwardsville's East St. Louis Center. Touch for map. Marker is at or near this postal address: 115 4th Street, East Saint Louis IL 62201, United States of America. Touch for directions.

Other nearby markers. At least 8 other markers are within walking distance of this marker. S. 5th St. and Railroad Ave. (about 300 feet away, measured in a direct line); S. 4th St. and E. Broadway 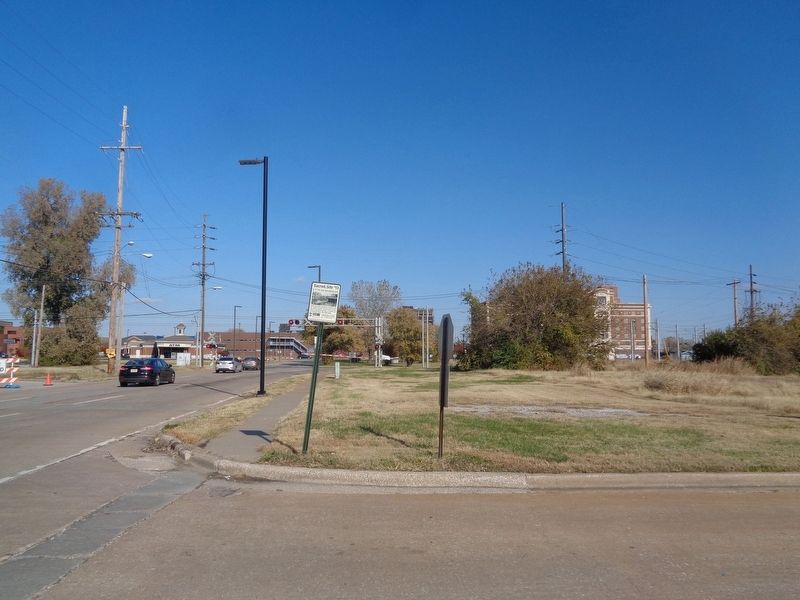 Regarding S. 4th St. and Railroad Ave.. As the marker states, the residence at this site belonged to Scott and Iva Clark. Rioters set fire to the house while the couple hid in the cellar. After the walls collapsed, they fled next door. Rioters burned that house and the Clarks fled again. They ran along the railroad tracks where they found a guardsman, who seemingly offered protection. The three of them proceeded to South 4th St and then toward East Broadway, cutting through an alley. A mob attacked the Clarks and the guardsman did nothing. Mr. Clark was struck in the head with an iron bar and a rope was placed around his neck. He pleaded for his life. The rioters attempted to hang him but the rope was too short, so they dragged him instead. He died of strangulation four days later.

Notes/sources: McCoy's Directory gives the residence of the Clarks to be 741a Walnut Avenue in 1916 (p. 126). Rudwick's "Race riot at East St. Louis - 1917" cites trial testimony of Mrs. Clark, residence to be at 4th and Railroad Avenue. It is possible that they moved sometime between 1916 and 1917. Malcolm McLaughlin's Power, Community, and Racial Killing in East St. Louis (p. 129) tells the violence occurred at 4th and Broadway, which would be reasonably close to the site rioted in.
Credits. This page was last revised on December 7, 2020. It was originally submitted on November 8, 2019, by Jason Voigt of Glen Carbon, Illinois. This page has been viewed 81 times since then and 6 times this year. Photos:   1, 2. submitted on November 8, 2019, by Jason Voigt of Glen Carbon, Illinois. • Devry Becker Jones was the editor who published this page.
Share This Page.