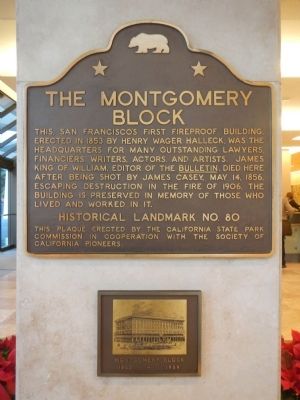 This, San Francisco’s first fireproof building erected in 1853 by Henry Wager Helleck, was the headquarters for many outstanding lawyers, financiers, writers, actors and artists. James King of William, editor of the Bulletin, died here after being shot by James Casey, May 14, 1856. Escaping destruction in the fire of 1906, the building is preserved in memory of those who lived and worked in it.

Erected by California State Park Commission in Cooperation with the Society of California Pioneers. (Marker Number 80.)

Topics and series. This historical marker is listed in this topic list: Notable Buildings. In addition, it is included in the California Historical Landmarks, and the Pony Express National Historic Trail series lists. A significant historical date for this entry is May 14, 1835. 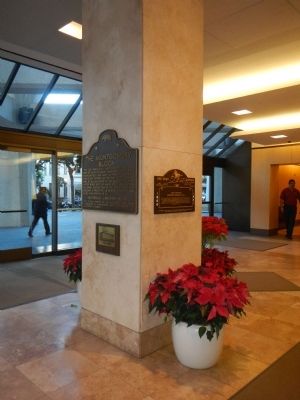 Click or scan to see
this page online
from Montgomery Street near Washington Street, on the left when traveling north. Touch for map. Marker is at or near this postal address: 600 Montgomery Street, San Francisco CA 94111, United States of America. Touch for directions.

More about this marker. This marker is currently located in the north lobby of the Trans-America Building. It was originally placed on the Montgomery Block building which was demolished in 1959. 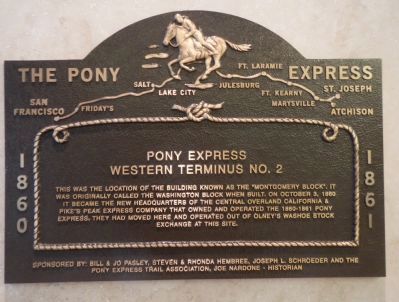 Photographed By Barry Swackhamer, December 16, 2013
3. Pony Express plaque in the lobby of the Trans-America Building
The Pony Express
1860 – 1861

This was the location of the building known as the “Montgomery Block”. It was originally called the Washington Block when built. On October 3, 1860 it became the new headquarters of the Central Overland California & Pike’s Peak Express Company that owned and operated the 1860-1861 Pony Express. They had moved here and operated out of Olney’s Washoe Stock Exchange at this site.
Sponsored by Bill & Jo Pasley, Steven & Rhonda Hembree, Joseph L. Schroeder and the Pony Express Trail Association, Joe Nardone – Historian 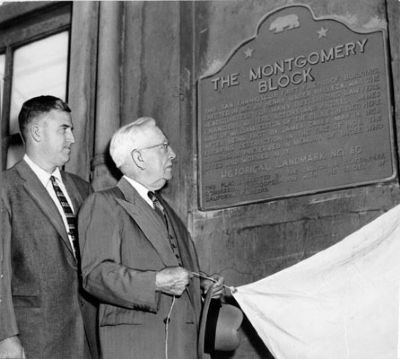 Photographed By Barry Swackhamer
4. The original placement of The Montgomery Block Marker
In 1955, Oliver P. Stidger, who had saved the Monkey Block from dynamiting in 1906, unveiled a plaque naming the building an historic site. 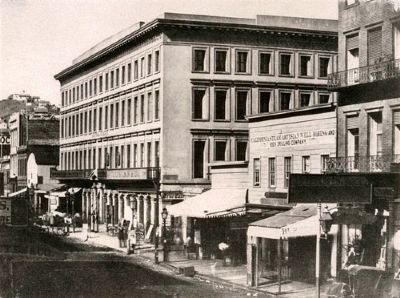 Photographed By Barry Swackhamer
5. The Montgomery Block in the 1860s. 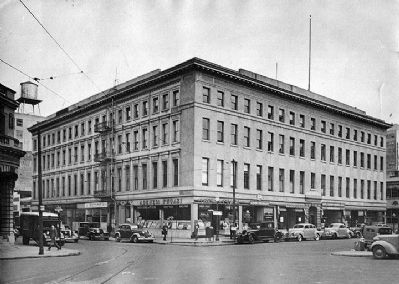