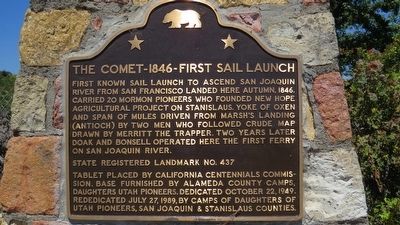 By George Midwin, July 27, 2015
1. The Comet – 1846 – First Sail Launch Marker
This appears to be a relatively new plaque, replacing one of the two stolen from this site. No information of the landmark plaque #780-7 which had also been installed on this monument.
Inscription.
The Comet – 1846 – First Sail Launch. . First known sail launch to ascend San Joaquin River from San Francisco landed here autumn 1846. Carried 20 Mormon pioneers who founded New Hope agricultural project on the Stanislaus. Yoke of oxen and span of mules driven from Marsh’s Landing (Antioch) by two men who followed crude map drawn by Merritt the trapper. Two years later Doak and Bonsell operated here the first ferry on the San Joaquin River. . This historical marker was erected in 1949 by The California Centennials Commission. Based furnished by Alameda County Camps, Daughters Utah Pioneers. October 22, 1949. Rededicated July 27, 1989, by Camps of Daughters of Utah Pioneers, San Joaquin & Stanislaus Counties. It is in Lathrop in San Joaquin County California

Marker series. This marker is included in the California Historical Landmark, and the Daughters of Utah Pioneers marker series.

Location. 37° 47.221′ N, 121° 18.34′ W. Marker is in Lathrop, California, in San Joaquin County. Marker is on South Manthey Rd, on the right when traveling west. Marker is located at the entrance to the Mossdale Crossing Park and Launching 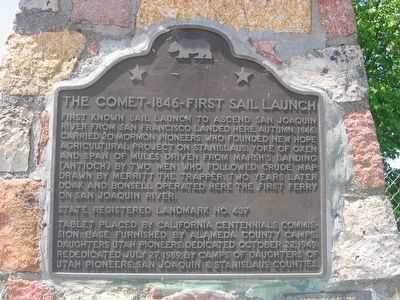 Additional comments.
1. First Ferry Boat
The oldest and one of the best patronized ferries was one on the San Joaquin River later known as the Moss Ferry, near the present crossing of the Southern Pacific railroad bridge. It was established in 1849, by John Doak and Jacob Bonsell; these two men in 1848, returning from the gold mines, concluded to establish a ferry, at the point named, and they began operations by running a small yawl across the river carrying passengers.

Later in the year John Doak, going to Corte de Madera, in Marin County, there built a ferry boat of the timber then growing upon the point. He sailed the boat up stream as far possible and then towing it the balance of the distance, made the trip from point 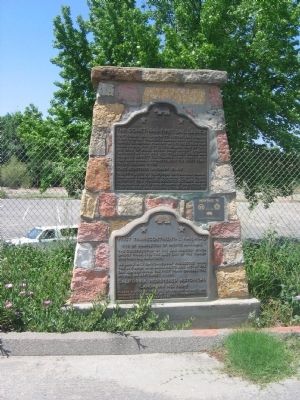 By Syd Whittle, May 11, 2006
3. The Comet – 1846 – First Sail Launch Marker
This marker shares base with First Continental Railroad marker
to point in two weeks. The boat or barge was placed in position, and a long heavy rope stretched from shore to shore. By this means the boat was pulled to and fro across the river. The charges to cross were one dollar for a footman, three dollars for a man on horseback, and $8.00 for a wagon and horses. The ferry did an immense business, for it was on the direct road from Sacramento through Stockton to San Jose and Oakland. There was no other way to reach the coast overland.

John Doak, the enterprising but restless pioneer, soon tired of the ferry business and in 1852 sold his interest to Hiram Scott. John Bonsell dying that year in New York, his widow took over the ferry. Shortly afterward, Mrs. Bonsell married James A, Shepherd, who for a season took charge of the ferry. In 1856 it was purchased by William T. Moss, who soon afterward established the San Francisco Examiner. 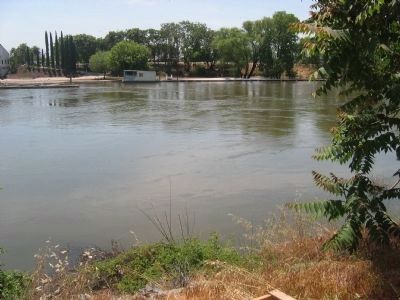 By Syd Whittle, May 11, 2006
4. San Joaquin River - Site of The Comet Launch and First Ferry Crossing 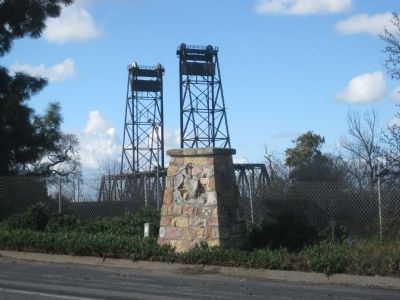 5. Base With Missing Marker
More. Search the internet for The Comet – 1846 – First Sail Launch.