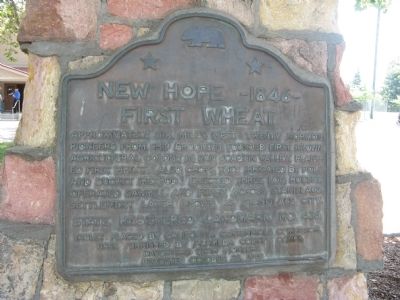 Topics and series. This historical marker is listed in these topic lists: Agriculture • Settlements & Settlers. In addition, it is included in the California Historical Landmark, and the Daughters of Utah Pioneers series lists. 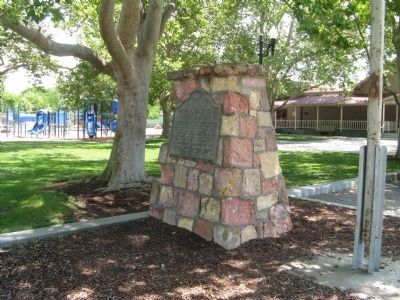 By Syd Whittle, May 29, 2009
2. New Hope – 1846 Marker
Fourth Street near Locust Street when traveling west. Marker is located at the Ripon Community Center City Park. Touch for map. Marker is at or near this postal address: 300 West Fourth Street, Ripon CA 95366, United States of America. Touch for directions.

Regarding New Hope – 1846. This site was designated as California Registered Historical Landmark No. 436 on June 2, 1949.

"Soon after their arrival, a log house, constructed after the Western manner and covered with oak shingles fashioned on the spot, was put up, while, with a crudely improvised sawmill, boards were hewn from oak logs for the cabin floor. Elk, bear and wild geese were so abundant that one man with a rifle could bring in enough game in three hours time to supply the colony for a week. Wheat, farm instruments and other necessary supplies had been brought and by the middle of January 1847, eighty acres of grain had been sown. The little settlement did indeed seem full of hope and promise.
But with the coming of winter rains the whole aspect was changed. The season was so stormy that the river overflowed its banks causing the little band of pioneers untold suffering and hardship. Then, too, serious dissentions arose among the colonists. So completely disheartened did they become that gradually the group disbanded. By the summer of 1847, only one man, a Mr. Buckland, remained and he too, was gone by November."
— Submitted June 1, 2009, by Syd Whittle of El Dorado Hills, California.
2. New Hope
From Chronology of Stanislaus County History by Robert LeRoy Santos,
California State University, Stanislaus
University Library, 2002:

"Mormon Sam Brannan brought settlers to a spot 1 1/2 miles north of the junction of the Stanislaus and San Joaquin Rivers, near present day Salida. On the south bank had been Estanislao's camp, and on the north bank (in today's San Joaquin County), Brannan established the settlement of New Hope or Stanislaus City. But, settlers of New Hope lived on both sides of the river, which meant they lived in the future Stanislaus County. Mormon President Brigham Young could not agree with Brannan to settle the Mormon people at New Hope instead of in the Valley of the Great Salt Lake. Many of the Mormon settlers went to the gold mines or to Utah abandoning the settlement."
Source: http://library.csustan.edu/bsantos/chronology.html
— Submitted June 1, 2009, by Syd Whittle of El Dorado Hills, California.
Credits. This page was last revised on December 11, 2019. It was originally submitted on June 1, 2009, by Syd Whittle of El Dorado Hills, California. This page has been viewed 1,574 times since then and 30 times this year. Last updated on December 11, 2019, by Craig Baker of Sylmar, California. Photos:   1, 2. submitted on June 1, 2009, by Syd Whittle of El Dorado Hills, California. • J. Makali Bruton was the editor who published this page.
Share This Page.