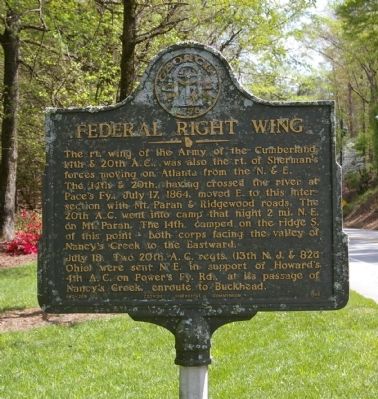 Photographed By David Seibert, April 13, 2008
1. Federal Right Wing Marker
Inscription.
Federal Right Wing. . The rt. wing of the Army of the Cumberland, 14th and 20th A.C., was also the rt. of Sherman´s forces moving on Atlanta from N. and E., The 14th and 20th, having crossed the river at Pace´s Fy., July 27, 1864, moved E. to this intersection with Mt. Paran and Ridgewood roads. The 20th A.C. went into camp that night 2 mi. N.E. on Mt. Paran. The 14th camped on the ridge S. of this point ~ both corps facing the valley of Nancy´s Creek to the Eastward. , July 18. Two 20th A.C. regts. (13th N.J. and 82d Ohio) were sent N.E. in support of Howard´s 4th A.C. on Power´s Fy. Rd., at its passage of Nancy´s Creek, enroute to Buckhead. . This historical marker was erected in 1956 by Georgia Historical Commission. It is in Atlanta in Fulton County Georgia

Topics and series. This historical marker is listed in this topic list: War, US Civil. In addition, it is included in the Georgia Historical Society series list. A significant historical month for this entry is July 1878. 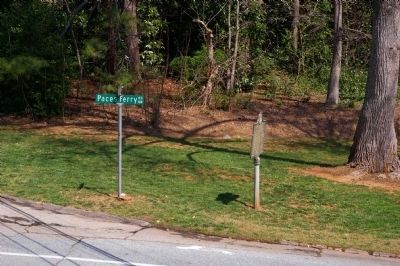 Click or scan to see
this page online
Mount Paran Road NW, on the right when traveling west on Paces Ferry Road NW. Touch for map. Marker is in this post office area: Atlanta GA 30327, United States of America. Touch for directions.