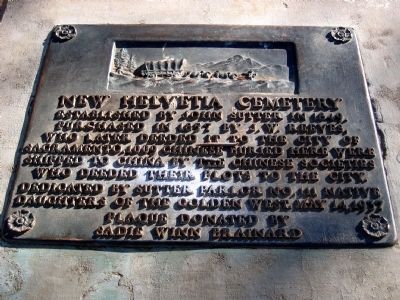 Photographed By Syd Whittle, January 15, 2006
1. New Helvetia Cemetery Marker
Inscription.
New Helvetia Cemetery. . Established by John Sutter in 1849. Purchased in 1857 by J.W. Reeves, who later deeded it to the City of Sacramento. 1009 Chinese buried here were shipped to China by the Chinese Societies who deeded their plots to the city. . This historical marker was erected in 1937 by Sutter Parlor No. 111 Native Daughters of the Golden West. Plaque donated by Sadie Winn Brainard. It is in Sacramento in Sacramento County California

Established by John Sutter in 1849. Purchased in 1857 by J.W. Reeves, who later deeded it to the City of Sacramento. 1009 Chinese buried here were shipped to China by the Chinese Societies who deeded their plots to the city.

Topics and series. This historical marker is listed in these topic lists: Cemeteries & Burial Sites • Settlements & Settlers. In addition, it is included in the California Historical Landmarks, and the Native Sons/Daughters of the Golden West series lists. A significant historical year for this entry is 1849. 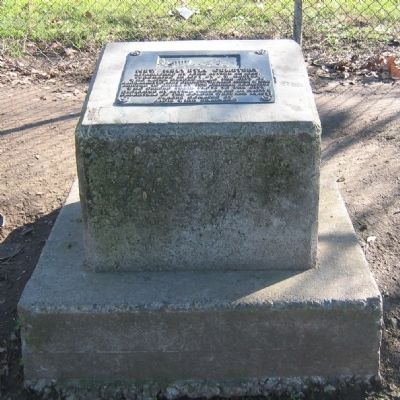 Regarding New Helvetia Cemetery. All graves were relocated in the 1950s.

This site is a California Registered Historical Landmark (No. 592)

Additional commentary.
1. New Helvetia Cemetery
Prior to the establishment of the City Cemetery in 1849, burials were conducted in an area not far from Sutter's Fort, but its lower elevation and closeness to the American River caused it to flood frequently. These old grounds, however, continued as a privately operated cemetery, named New Helvetia, for some twenty-five years before reverting to the city. Over the years, tombstones and monuments were removed, vandalized and even stolen. Eventually, in the 1950s, the city authorized the construction of Sutter Junior High School (now Sutter Middle 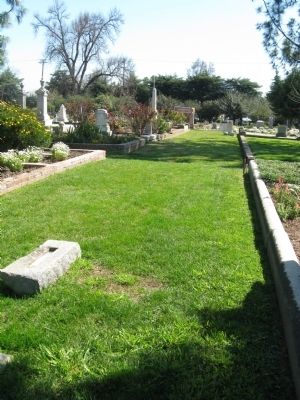 Photographed By Syd Whittle, March 12, 2009
3. Old Sacramento City Cemetery
Site of the re-internment of the "known" remains from the New Helvetia Cemetery.
School) on the site – Alhambra Boulevard to 32nd Street, I to J Streets. A historical marker can be found at the edge of the sidewalk along Alhambra Boulevard. Unclaimed remains were re-interred in special plots at both the City Cemetery and East Lawn Memorial Park on Folsom Boulevard.
Source: Sacramento City Cemetery Commission
— Submitted September 27, 2008, by Syd Whittle of Mesa, Arizona.
2. New Helvetia Cemetery Timeline
*1839-1849 Burials within grounds outside Sutter's Fort
*1845 First Internemt in Sutter Fort Burying Ground
*1849 Sutter's Burial Ground dedicated. Burials shallow, marked by wooden boards.
*1849 Capt. John A. Sutter donated ten acres of land.
*1850 Twenty acres in size, renamed New Helvetia Cemetery. Flooded in January, no burials until summer when Mayor Bigelow and Sheriff McKinney were buried.
*1850-1857 No burials due to recurrent flooding...burials mainly at City Cemetery.
*1856 (Jan.) Effort to have bodies moved to City Cemetery.
*1856 (Oct.) Title changed from estate of Frierson to Dr. R.H. McDonald ($900 for ten acre lot) and became active cemetery again.
*1857 Purchased by J.W. Reeves, an undertaker. After his death owned by Mrs. Reeves and maintained by her father, Mr. Mellon, as Superintendent.
*1857 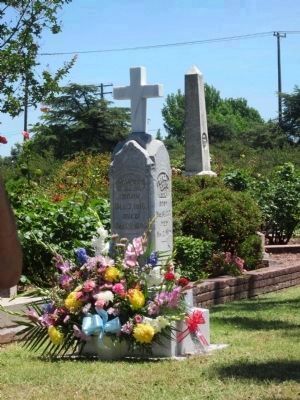 Photographed By Syd Whittle, June 2, 2012
4. The Restored John Asch Family Tombstone
One of three recovered New Helvetia Cemetery hand carved tombstones placed at the re-internment grave sites at City Cemetery. The dedication took place on June 2, 2012. In attendance were family descendants, representatives of the DAR, City Cemetery, Sacramento Historical Society and the Sacramento County Cemetery Commission and many others.
(Oct.) City took title after agreement with Reeves family on maintenance of the family tomb.
*1912 Grounds closed to burials.
*1916 Converted into park as showed "great neglect". Many bodies removed including 1000 Chinese returned to their native land. Most monuments replaced by flat grave markers.
*1954 Offered to school district by City Council as a site for Sutter Middle School.
*1955 (Oct 12)-1956 (Mar.27) 5,235 bodies exhumed.
*1989 Monument erected and dedicated by Old City Cemetery Committee and East Lawn Memorial Parks & Mortuaries.
*1990 Monument erected by Japanese Community for the more than 600 Japanese moved.
*1995 Monument to Sheriff McKinney by the Sacramento Sheriff's Dept.
*1999 Monument to Dr. Benjamin F. Pendery by Sacramento-El Dorado Medical Society.
*2003 Monument to indigents erected by the Sacramento County Cemetery Advisory Commission.
— Submitted May 12, 2009, by Syd Whittle of Mesa, Arizona.
Credits. This page was last revised on December 12, 2019. It was originally submitted on September 27, 2008, by Syd Whittle of Mesa, Arizona. This page has been viewed 3,149 times since then and 84 times this year. Last updated on December 12, 2019, by Craig Baker of Sylmar, California. Photos:   1, 2. submitted on September 27, 2008, by Syd Whittle of Mesa, Arizona.   3. submitted on March 13, 2009, by Syd Whittle of Mesa, Arizona.   4. submitted on June 3, 2012, by Syd Whittle of Mesa, Arizona. • J. Makali Bruton was the editor who published this page.
Share this page.