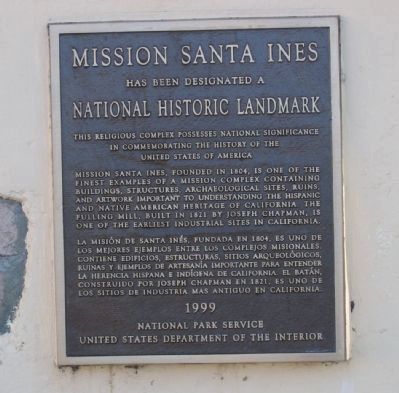 By Syd Whittle, March 21, 2006
1. Mission Santa Ines Marker
Inscription.
Mission Santa Ines, founded in 1804, is one of the finest examples of a Mission complex containing buildings, structures, archaeological sites, ruins, and artwork important to understanding the Hispanic and Native American heritage of California. The fulling mill, built in 1821 by Joseph Chapman, is one of the earliest industrial sites in California. . This historical marker was erected in 1999 by National Park Service, United States Department of the Interior. It is in Solvang in Santa Barbara County California

Has been designated a
NATIONAL HISTORIC LANDMARK
This religious complex possesses national significance in commemorating the history of the United States of America.