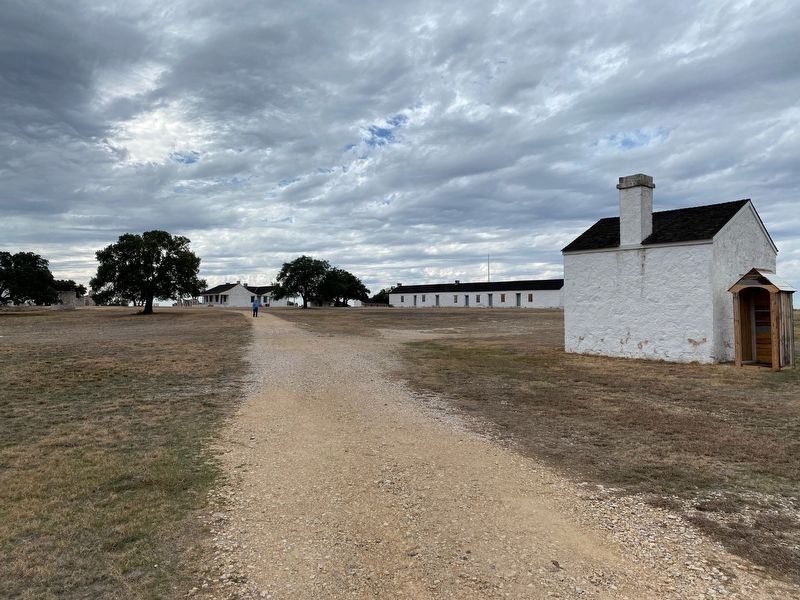 By Brian Anderson, December 28, 2019
1. Sentry Building Marker
The Sentry Building which the marker used to be attached to is visible at the right of the photo. The marker has been permanently removed and placed in the site's archives.
Inscription.
Sentry Building. . . Officer-of-the-day station and sentry post on north road to Fort Concho. Constructed 1852, by 8th Infantry; Fort McKavett provided protection for settlers from Indians. Guadalupe River cypress with native limestone. .
Recorded Texas Historic Landmark - 1968. . This historical marker was erected in 1968 by Texas State Historical Survey Committee. It is in Fort McKavett in Menard County Texas

Other nearby markers. At least 2 other markers are within 2 miles of this location, measured as the crow flies. Site of Fort McKavett (approx. 0.3 miles away); Colonel Black Ranch House (approx. 1½ miles away).

More about this marker. Per conversation with the staff at Fort McKavett, this marker was permanently removed in the 1970s when the site was acquired by the State. The marker was lost for many years, but was recently rediscovered and has been placed in storage at the site's archives. There are presently no plans to reattach the marker to the Sentry Building. The marker text on this page was retrieved from the Texas Historical Commission Atlas.