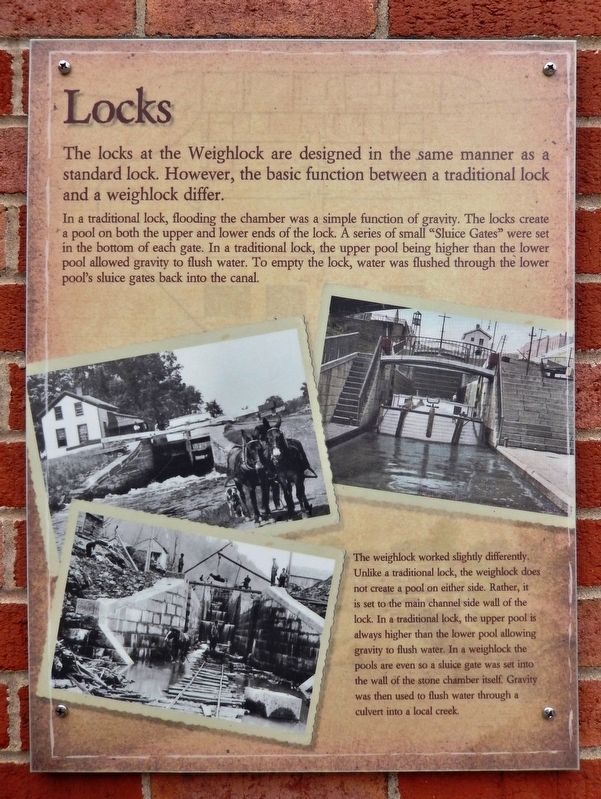 The locks at the Weighlock are designed in the same manner as a standard lock. However, the basic function between a traditional lock and a weighlock differ. In a traditional lock, flooding the chamber was a simple function of gravity. The locks create a pool on both the upper and lower ends of the lock. A series of small "Sluice Gates" were set in the bottom of each gate. In a traditional lock, the upper pool being higher than the lower pool allowed gravity to flush water. To empty the lock, water was flushed through the lower pool's sluice gates back into the canal.

The weighlock worked slightly differently. Unlike a traditional lock, the weighlock does not create a pool on either side. Rather, it is set to the main channel side wall of the lock. In a traditional lock, the upper pool is always higher than the lower pool allowing gravity to flush water. In a weighlock the pools are even so a sluice gate was set into the wall of the stone chamber itself. Gravity was then used to flush water through a culvert into a local creek. 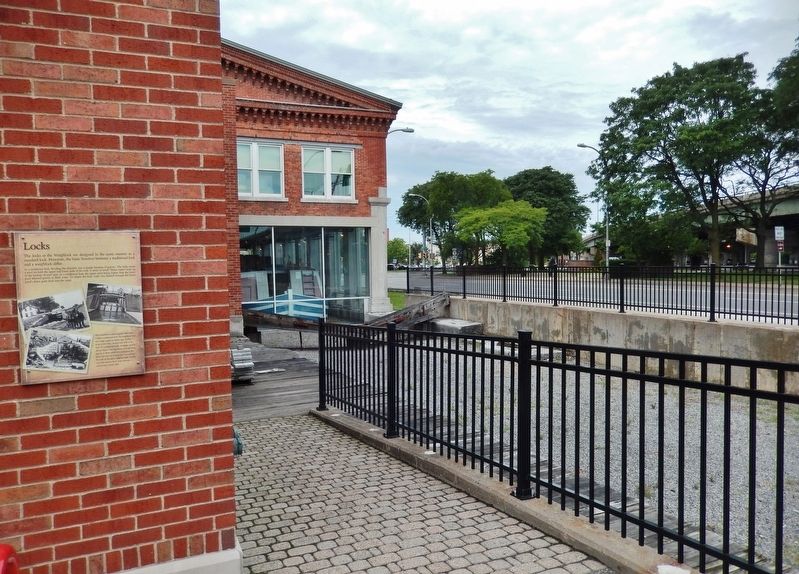 Location. 43° 3.039′ N, 76° 8.907′ W. Marker is in Syracuse, New York, in Onondaga County. Marker can be reached from Erie Boulevard East (New York State Route 5) just east of Montgomery Street, on the right when traveling east. Marker is mounted at eye-level near the northeast corner of the Erie Canal Museum. Touch for map. Marker is at or near this postal address: 318 Erie Boulevard East, Syracuse NY 13202, United States of America. Touch for directions.

Related markers. Click here for a list of markers that are related to this marker. Erie Canal Weighlock

Also see . . .
1. Weigh lock (Wikipedia). A barge to be weighed was brought into a supporting cradle connected by levers to a weighing mechanism. The water was then drained and the scale balance adjusted to determine the barge gross weight. Subtracting the tare weight (the weight of the barge when empty) would give the cargo weight. Originally weighlocks measured the weight of the barge. (Submitted on January 7, 2020, by Cosmos Mariner of Cape Canaveral, Florida.)