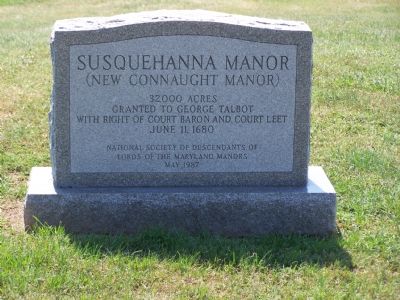 By Beverly Pfingsten, July 14, 2007
1. Susquehanna Manor Marker
Inscription.
Susquehanna Manor. (New Connaught Manor).
32,000 acres granted to George Talbot with Right of Court Baron and Court Leet June 11, 1680. . This historical marker was erected in 1987 by National Society of Descendants of Lords of the Maryland Manors. It is in Charlestown in Cecil County Maryland


Erected 1987 by National Society of Descendants of Lords of the Maryland Manors.

More about this marker. I wouldn't say the marker is damaged, but it was not standing on its base when I observed it on January 9, 2020. The marker was resting against the base with its (the marker's) top resting on the ground next to the base. 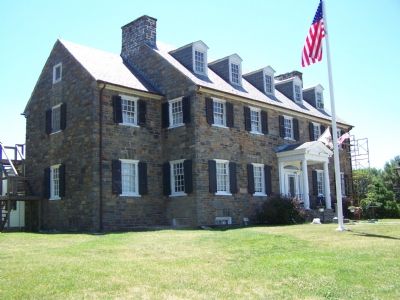 By William Pfingsten, July 16, 2007
2. Barnes Inheritance
This dwelling was built on a part of Susquehanna Manor. The home was built between 1793 and 1800. The property is now occupied as the clubhouse for the Principio Furnace Golf Club.
• Colonial Era • Political Subdivisions •
More. Search the internet for Susquehanna Manor.