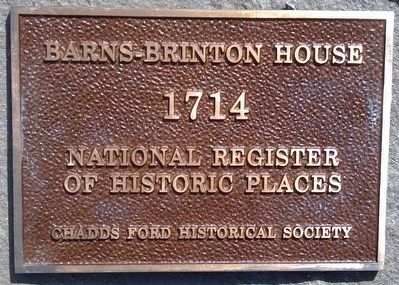 Location. 39° 52.423′ N, 75° 37.54′ W. Marker is near Chadds Ford, Pennsylvania, in Chester County. Marker can be reached from Baltimore Pike, on the right when traveling east. Located to right of entry door landing. Touch for map. Marker is at or near this postal address: 630 Baltimore Pike, Chadds Ford PA 19317, United States of America. Touch for directions. 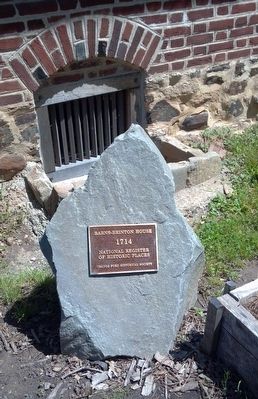 Additional comments.
1. Barns-Brinton House History
The Barns portion of the buildings name is for William Barns, a blacksmith who built this historic Flemish bond brick house in 1714 for use as a Tavern as well as his home. The foundation walls visible from the basement show several recesses that were used as cold rooms to keep food and beer from spoiling. Barns operated a portion of his house as an Inn and Tavern from 1722 until about 1729 or so. When William Barns died in 1731, he was purportedly deeply in debt to many of his neighbors.

After Barns death the property passed through a few owners until about 1753 when the house and some surrounding property was purchased by James Brinton, the Brinton portion of the buildings name. Brinton was the owner on September 11, 1777 when Hessian General Wilhelm von Knyphausen passed by en-route to Chadds Ford, at what would become the site of the Battle 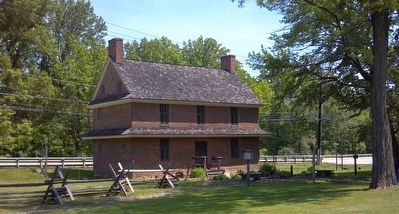 By Keith S Smith, May 26, 2016
3. Barns-Brinton House
of Brandywine, during the Revolutionary War. The Brinton family maintained ownership of the house for over 100 years until selling it in 1859. The house then went through several more owners over the next hundred plus years until 1969 when the property was purchased by the Chadds Ford Historical Society and an extensive restoration was done returning the interior to that of a country tavern. During the renovation much of the building’s original interior hardware was retained, hardware that was likely wrought by blacksmith William Barns.
— Submitted May 31, 2016, by Keith S Smith of West Chester, Pennsylvania. 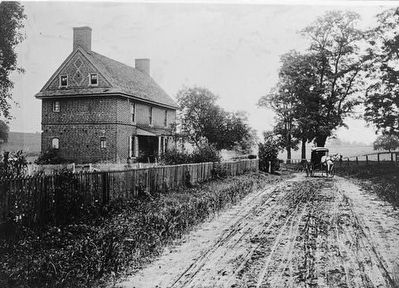