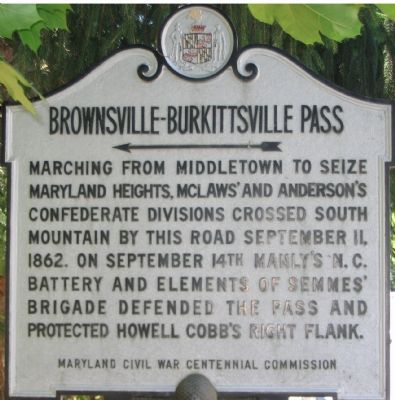 Other nearby markers. At least 8 other markers are within 2 miles of this marker, measured as the crow flies. St. Luke’s Episcopal Church (approx. 0.6 miles away); Battle of Maryland Heights (approx. one mile away); “Crampton Gap” (approx. 1.3 miles away); Forest of Needwood (approx. 1.6 miles away); Confederate Forces (approx. 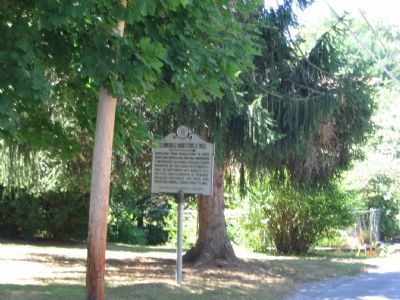 Regarding Brownsville-Burkittsville Pass. The Brownsville Pass Road, described on the marker as the route over South Mountain, is no longer maintained. A trail still traces its path over the mountain, but the road dead ends about a half mile east of the marker.

Also see . . .  Crampton's Gap or South Mountain, Which is it?. Timothy Reese places the fighting along South Mountain on September 14, 1862 in context to the Antietam Campaign. Of note, scroll about halfway down the page to see a panoramic view of South Mountain with the gaps and other terrain features pointed out. From this perspective, clearly Brownsville Gap was the right anchor of the Confederate's eight mile front along South Mountain. (Submitted on August 13, 2007, by Craig Swain of Leesburg, Virginia.) 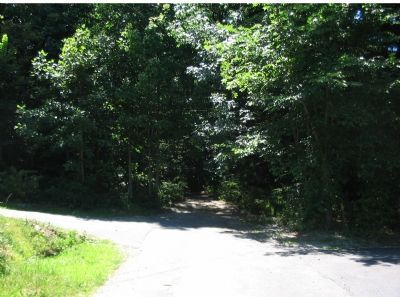 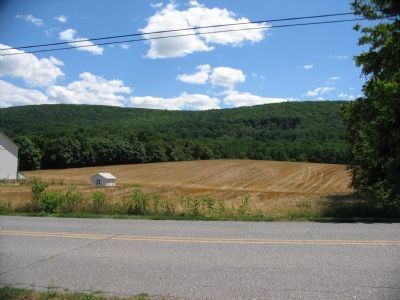 By Craig Swain, July 21, 2007
4. Brownsville Pass From the West
Semmes' Brigade and Manly's Battery defended the pass from the crest of the mountain. After the retreat from Crampton's Gap, those forces fell back into Brownsville to anchor the Confederate lines across Pleasant Valley (where this picture was taken). 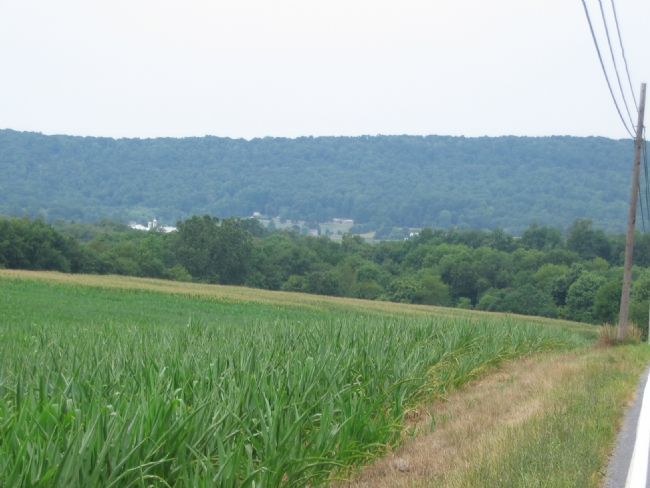 By Craig Swain, August 5, 2007
5. Brownsville Pass From the East Side
Looking at South Mountain from just east of Burkittsville, this gives an appreciation for the rolling terrain around South Mountain, and the imposing heights where the Confederates defended. Brownsville Pass Road runs sharply northeast-southwest across the crest of the mountain. Elements Semmes' Brigade advanced to the farmland in at the base of the mountain during the fighting at Crampton's Gap (just to the right out of frame). Manly's Artillery remained on the top of the mountain, firing upon the Federal flanks in the valley.
Credits. This page was last revised on January 31, 2020. It was originally submitted on August 13, 2007, by Craig Swain of Leesburg, Virginia. This page has been viewed 1,961 times since then and 2 times this year. Last updated on January 29, 2020, by Bradley Owen of Morgantown, West Virginia. Photos:   1, 2, 3, 4, 5. submitted on August 13, 2007, by Craig Swain of Leesburg, Virginia. • Bill Pfingsten was the editor who published this page.
Share This Page.