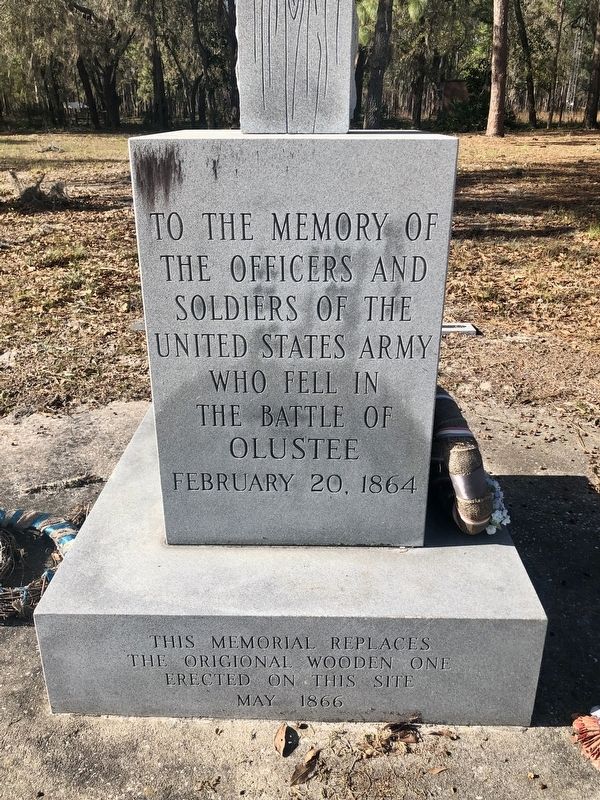 . Right side
Unity and Peace

May the Living Profit by the Example of the Dead

Our Country. . This memorial was erected in 1991 by Union Army District of Florida It is Near Olustee in Baker County Florida

To the memory of
the officers and
soldiers of the
United States Army
who fell in
the Battle of
Olustee
February 20, 1864

May the Living
Profit by
the Example of
the Dead 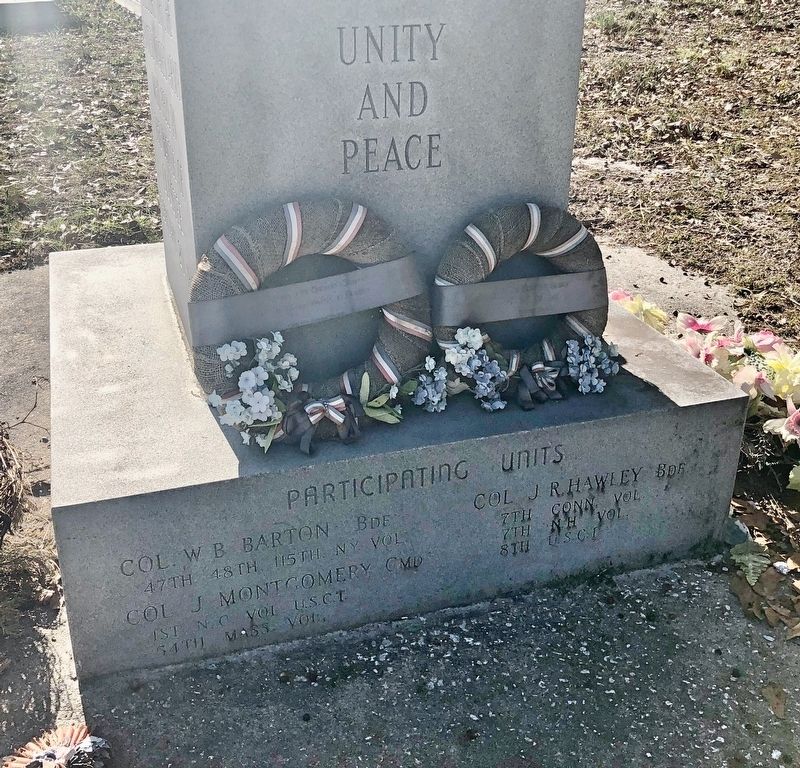 By Mark Hilton
2. Battle of Olustee Union Memorial (right side)

Click or scan to see
this page online
1991 by Union Army District of Fla.

Topics. This historical marker memorial is listed in this topic list: War, US Civil. A significant day of the year for for this entry is May 31.

Location. 30° 12.743′ N, 82° 23.432′ W. Marker is near Olustee, Florida, in Baker County. Marker can be reached from Michael Cason Road east of 17 Mile Camp Road, on the right when traveling west. Touch for map. Marker is at or near this postal address: Michael Cason Road, Olustee FL 32072, United States of America. Touch for directions.

Regarding Battle of Olustee Union Memorial. Following the end of the Civil War, the Olustee battlefield site was virtually forgotten. In 1866, a U.S. Army detachment under the command of Lieutenant Frederick E. Grossman visited the battlefield to collect the remains of the Union soldiers that had been hastily buried on the field in 1864. Grossman reported finding the remains of some 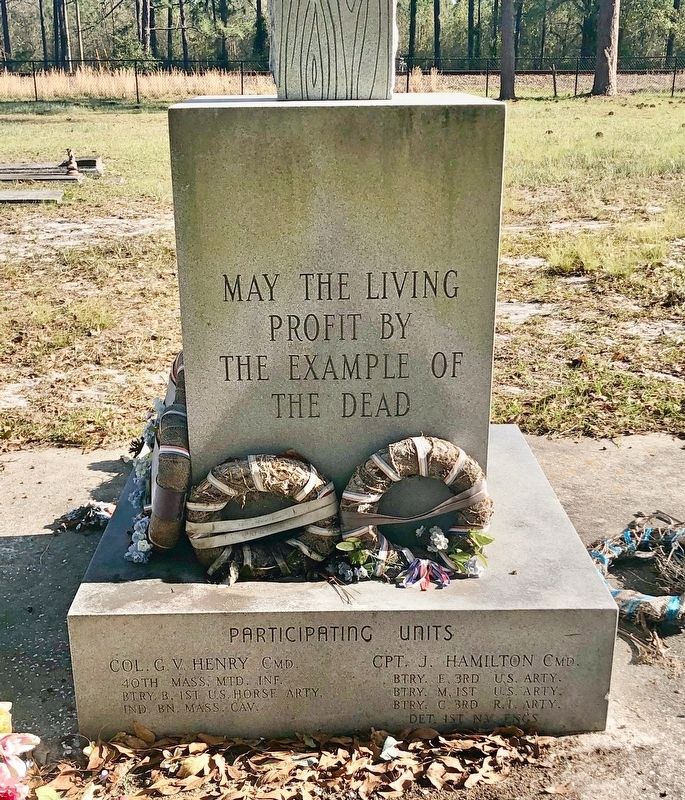 By Mark Hilton
3. Battle of Olustee Union Memorial (rear)
125 soldiers and placing them together in a mass grave. A twelve-foot high wooden monument was placed over the site, and the area was surrounded by a fence. Among the inscriptions added to the monument were the words: "To the memory of the officers and soldiers of the United States Army who fell in the Battle of Olustee, February 20, 1864."

Apparently the marker survived only a few years, as in 1873 an Olustee veteran visiting the area noted that a portion of the fencing was all that remained. In 1991, a replica of this monument was erected on the spot where the original monument is believed to have been placed. As no record exists to indicate their removal, it is thought by most students of the battle that the remains of the Union dead are still located in the mass grave in which they were buried in 1866. Source: Battle of Olustee website. 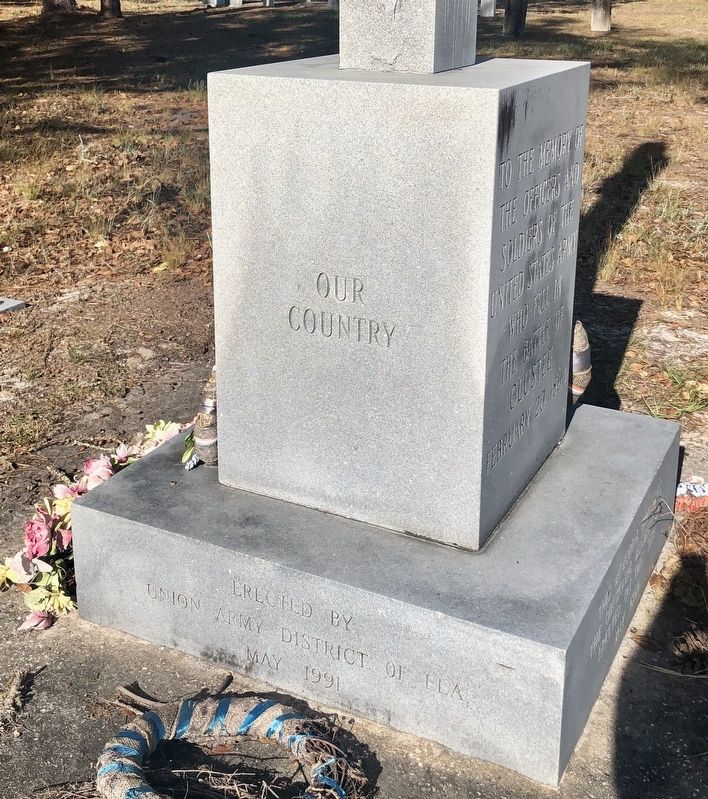 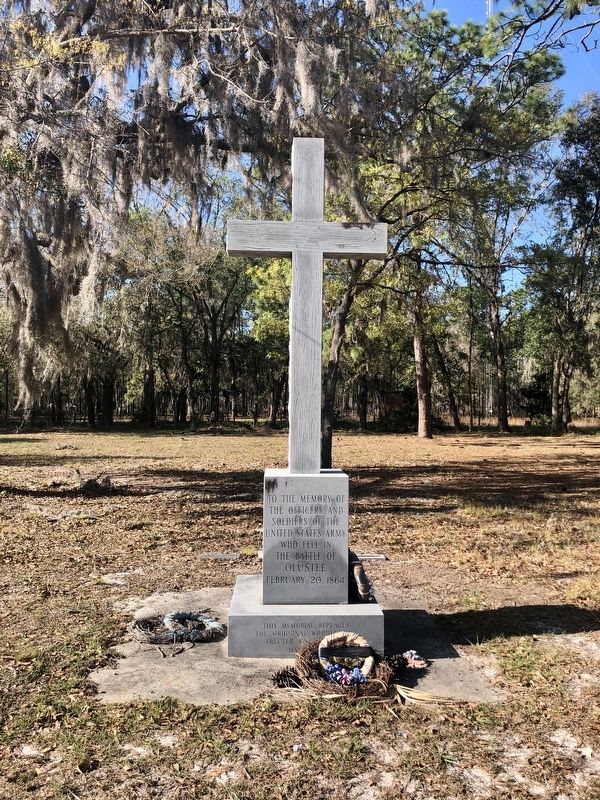 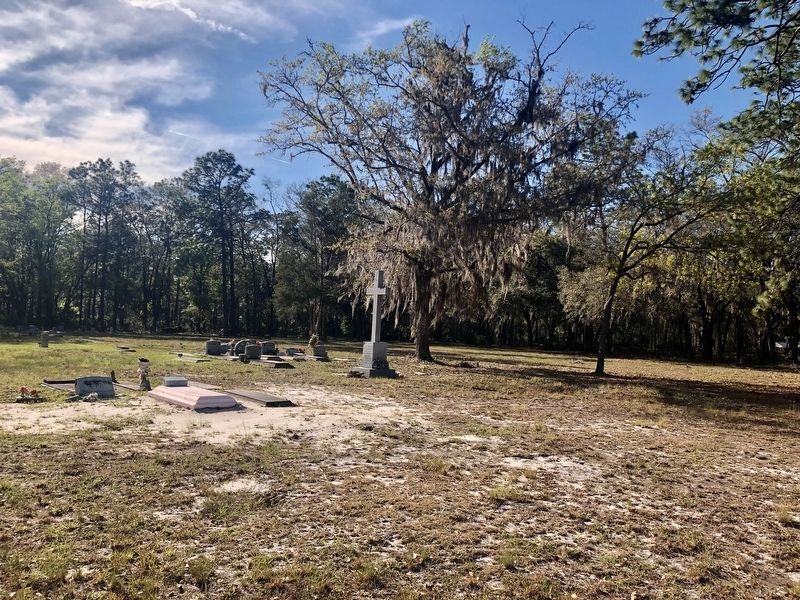