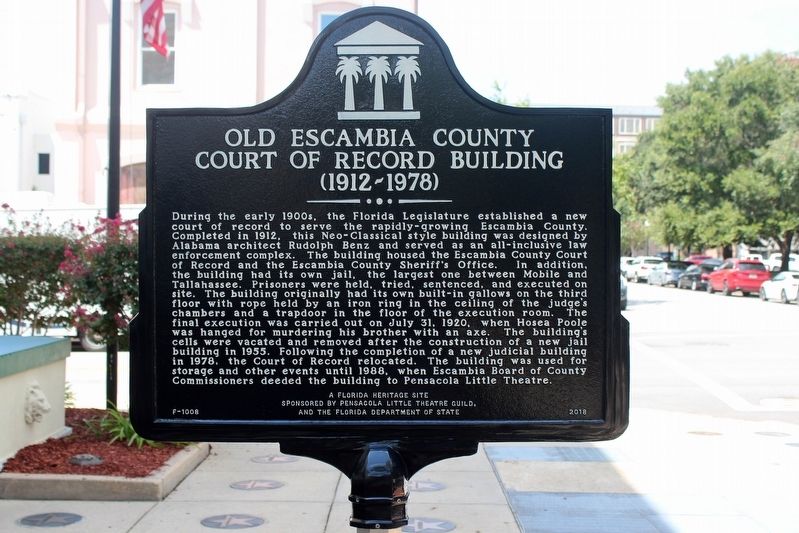 During the early 1900s, the Florida Legislature established a new court of record to serve the rapidly-growing Escambia County. Completed in 1912, this Neo-Classical style building was designed by Alabama architect Rudolph Benz and served as an all-inclusive law enforcement complex. The building housed the Escambia County Court of Record and the Escambia County Sheriff’s Office. In addition, the building had its own jail, the largest one between Mobile and Tallahassee. Prisoners were held, tried, sentenced, and executed on site. The building originally had its own built-in gallows on the third floor with rope held by an iron ring in the ceiling of the judge's chambers and a trapdoor in the floor of the execution room. The final execution was carried out on July 31, 1920, when Hosea Poole was hanged for murdering his brother with an axe. The building's cells were vacated and removed after the construction of a new jail building in 1955. Following the completion of a new judicial building in 1978, the Court of Record relocated. The building was used for 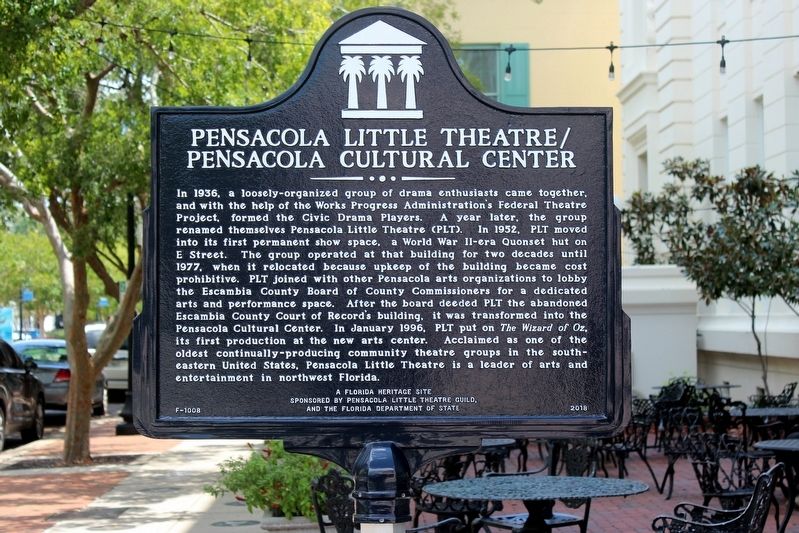 In 1936, a loosely-organized group of drama enthusiasts came together, and with the help of the Works Progress Administration’s Federal Theatre Project, formed the Civic Drama Players. A year later, the group renamed themselves Pensacola Little Theatre (PLT). In 1952, PLT moved into its first permanent show space, a World War II-era Quonset hut on E Street. The group operated at that building for two decades until 1977, when it relocated because upkeep of the building became cost prohibitive. PLT joined with other Pensacola arts organizations to lobby the Escambia County Board of County Commissioners for a dedicated arts and performance space. After the board deeded PLT the abandoned Escambia County Court of Record’s building, it was transformed into the Pensacola Cultural Center. In January 1996, PLT put on The Wizard of Oz, its first production at the new arts center. Acclaimed as one of the oldest continually-producing community theatre groups in the southeastern United States, Pensacola Little Theatre is a leader of arts and entertainment in northwest Florida. 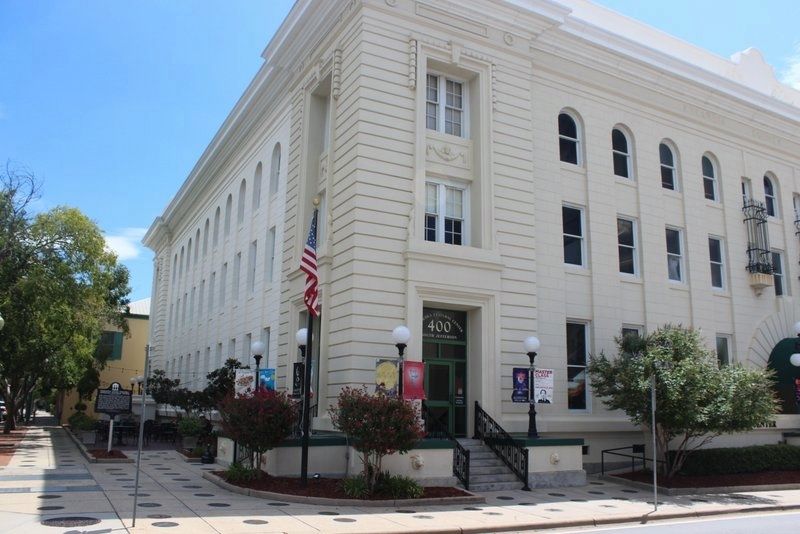 Location. 30° 24.5′ N, 87° 12.785′ W. Marker is in Pensacola, Florida, in Escambia County. Marker is at the intersection of East Zarragossa Street and South Jefferson Street, on the right when traveling east on East Zarragossa Street. Building also houses the Pensacola Children's Museum. Touch for map. Marker is at or near this postal address: 400 South Jeffereson Street, Pensacola FL 32502, United States of America. Touch for directions.