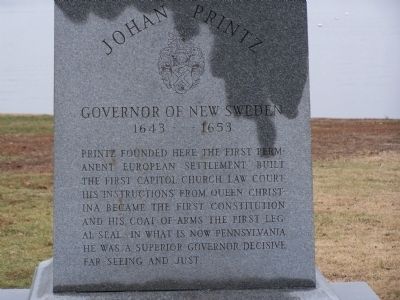 Printz founded here the first permanent European settlement. Built the first Capitol, church, law court. His instructions from Queen Christina became the first constitution and his coat of arms the first legal seal in what is now Pennsylvania. He was a superior governor, decisive, far seeing and just.

Topics. This historical marker is listed in these topic lists: Colonial Era • Settlements & Settlers. A significant historical year for this entry is 1643.

Location. 39° 51.646′ N, 75° 18.2′ W. Marker is in Tinicum Township, Pennsylvania, in Delaware County. Marker can be reached from Taylor Avenue. Statue is in Governor Printz Park. Touch for map. Marker is at or near this postal address: 105 Taylor Ave, Essington PA 19029, United States of America. Touch for directions.

Other nearby markers. At least 8 other markers are within 2 miles of this marker, measured as the crow flies. New Sweden (within shouting distance of this marker); Governor Printz Park (about 600 feet away, measured in a direct line); Lazaretto Quarantine Station (approx. ¼ mile away); Tinicum (approx. 0.7 miles away); Tinicum Township (approx. 0.7 miles away); Morton Homestead (approx. 1.1 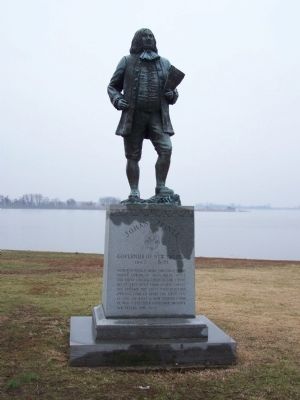 Click or scan to see
this page online
miles away); Ridley Township (approx. 1.4 miles away); John Morton (approx. 1.8 miles away). Touch for a list and map of all markers in Tinicum Township. 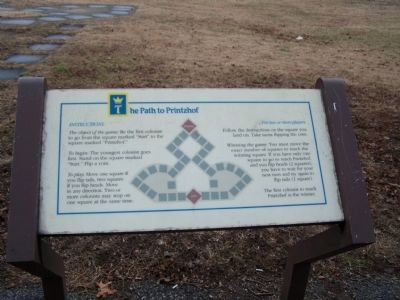 Photographed By Beverly Pfingsten, December 27, 2008
3. The Path to Printzhof
This is a game near the statue. 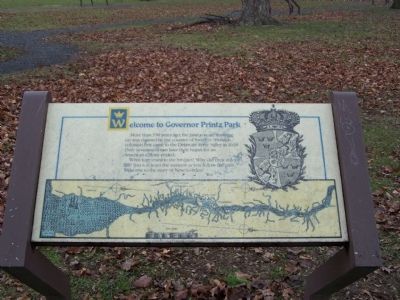