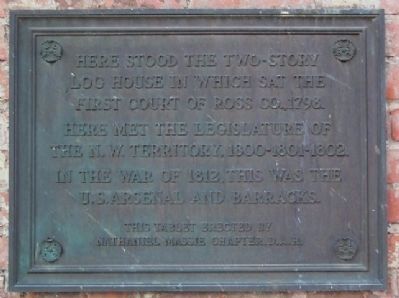 Photographed By William Fischer, Jr.
1. First Court of Ross County Marker
Inscription.
First Court of Ross County. . Here stood the two-story log house in which sat the first court of Ross Co., 1798. Here met the Legislature of the N. W. Territory, 1800-1801-1802. In the War of 18 12, this was the U. S. Arsenal and Barracks. . This historical marker was erected by Nathaniel Massie Chapter, Daughters of the American Revolution. It is in Chillicothe in Ross County Ohio

Erected by Nathaniel Massie Chapter, Daughters of the American Revolution.

Topics and series. This historical marker is listed in these topic lists: Government & Politics • Notable Places • Settlements & Settlers. In addition, it is included in the Daughters of the American Revolution (DAR) series list. A significant historical year for this entry is 1798.

Location. 39° 20.047′ N, 82° 59.139′ W. Marker is in Chillicothe, Ohio, in Ross County. Marker is at the intersection of 2nd Street and Walnut Street, on the left when traveling east on 2nd Street. Touch for map. Marker is at or near this postal address: 64 N Walnut St, Chillicothe OH 45601, United States of America. Touch for directions. 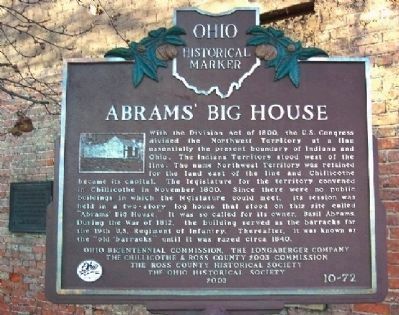 Photographed By William Fischer, Jr.
2. First Court of Ross County Marker
Marker is left and behind the state historical marker. 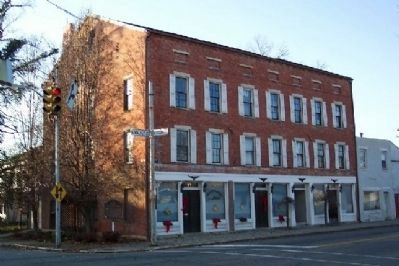