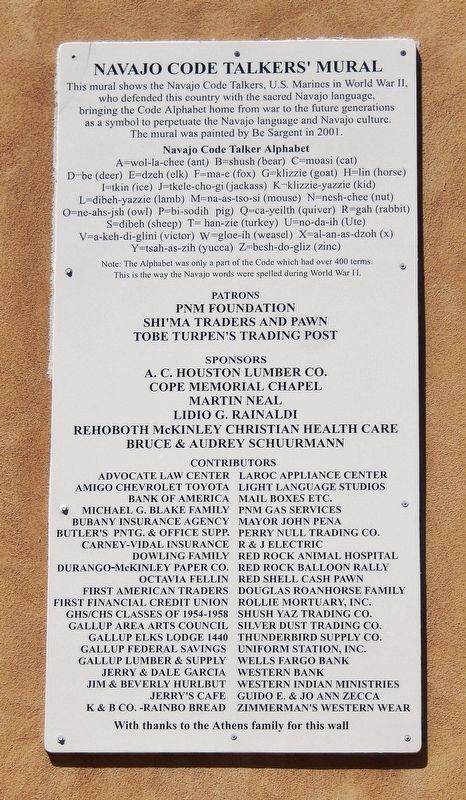 This mural shows the Navajo Code Talkers, U.S. Marines in World War II, who defended this country with the sacred Navajo language, bringing the Code Alphabet home from war to the future generations as a symbol to perpetuate the Navajo language and Navajo culture. The mural was painted by Be Sargent in 2001.

Note: The Alphabet was only a part of the Code which had over 400 terms. This is the way the Navajo words were spelled during World War II.

Topics. This historical marker is listed in these topic lists: Communications

Location. 35° 31.653′ N, 108° 44.559′ W. Marker is in Gallup, New Mexico, in McKinley County. Marker is on South 2nd Street (New Mexico Route 610) north of West Coal Avenue, on the left when traveling north. Marker is mounted above eye-level at the northeast corner of this building, facing South 2nd Street. The subject mural, which covers most of the east side of the building, is just to the left of this marker. Touch for map. Marker is at or near this postal address: 200 West Coal Avenue, Gallup NM 87301, United States of America. Touch for directions.

Also see . . .
1. Navajo Code Talker Mural. These United States Marines devised a code using their sacred Navajo language. The code was never broken and helped to win a victory in World War II. The mural depicts the code being passed

2. Naval History and Heritage Command. The idea to use Navajo for secure communications came from Philip Johnston, the son of a missionary to the Navajos and one of the few non-Navajos who spoke their language fluently. Johnston, reared on the Navajo reservation, was a World War I veteran who knew of the military's search for a code that would withstand all attempts to decipher it. He also knew that Native American languages notably Choctaw had been used in World War I to encode messages. Johnston believed Navajo answered the military requirement for an undecipherable code because Navajo is an unwritten language of extreme complexity. (Submitted on April 24, 2020, by Cosmos Mariner of Cape Canaveral, Florida.)