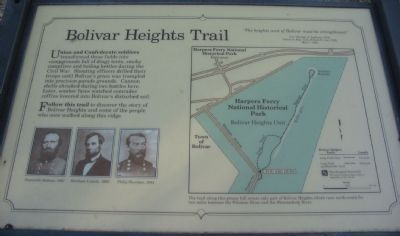 Follow this trail to discover the story of Bolivar Heights and some of the people who walked along this ridge.

Topics. This historical marker is listed in this topic list: War, US Civil. A significant historical month for this entry is May 1843.

Location. 39° 19.424′ N, 77° 45.675′ W. Marker is in Bolivar, West Virginia, in Jefferson County. Marker is at the intersection of Whitman Avenue and Prospect Avenue (County Road 27/1), on the left when traveling north on Whitman Avenue. Located at the trail head for the Bolivar Heights walking trail. Touch for map. 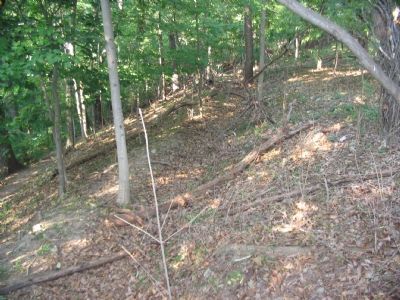 Photographed By Craig Swain, September 22, 2007
2. Section of the Trenches on Bolivar Heights

Click or scan to see
this page online
Marker is at or near this postal address: 47 Spring Street, Harpers Ferry WV 25425, United States of America. Touch for directions.

More about this marker. On the lower left under the text are portraits of Stonewall Jackson, Abraham Lincoln, and Philip Sheridan. On the right is a map of the trail, captioned, "The trail along this grassy hill covers only part of Bolivar Heights which runs north-south for two miles between the Potomac River and the Shenandoah River.