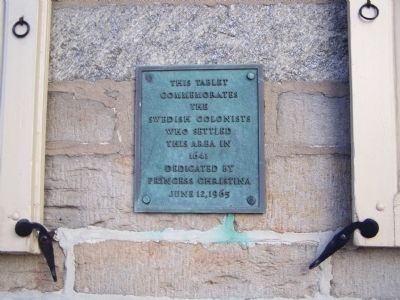 This Tablet
Commemorates
The
Swedish Colonists
Who Settled
This Area In
1641
Dedicated by
Princess Christina
June 12, 1965

Topics. This historical marker is listed in these topic lists: Colonial Era • Settlements & Settlers. A significant historical date for this entry is June 12, 1965.

Location. 39° 50.874′ N, 75° 21.595′ W. Marker is in Chester, Pennsylvania, in Delaware County. Marker is on Ave. of the States, on the right when traveling south. Marker is on the wall of the Colonial Courthouse. Touch for map. Marker is in this post office area: Chester PA 19013, United States of America. Touch for directions.