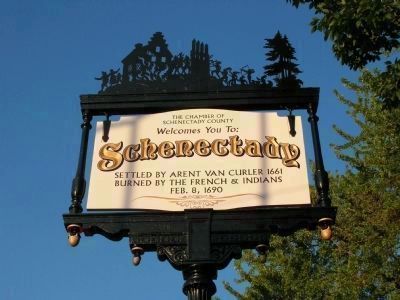 Erected 1924 by Schenectady Chamber Of Commerce.

Topics. This historical marker is listed in these topic lists: Notable Events • Settlements & Settlers. A significant historical month for this entry is February 1945. 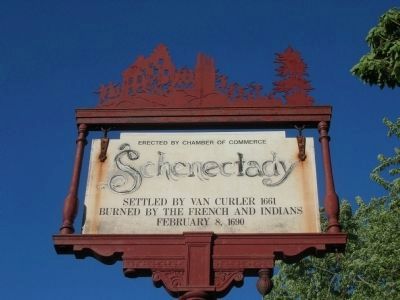 Click or scan to see
this page online
Washington Ave. on the third. Touch for map. Marker is in this post office area: Schenectady NY 12305, United States of America. Touch for directions.

More about this marker. In the spring of 1925 the sign was installed between the former Hotel Van Curler (now SUNY/Schenectady County Community College) and the entrance to the first Western Gateway Bridge. It was removed in 1970 before the construction of the existing Western Gateway Bridge to Scotia. The sign had been in storage for about 7 years before it was put back on display. On July 15, 1977 after the sign had been refurbished by local volunteer artisans, the sign was put back up at its current location in Liberty Park on the corner of lower State Street and Washington Ave.

In July of 2008 Richard Olson of Olson Signs in Scotia, New York refurbished the sign at his own expense as a way to show his gratitude for business the City of Schenectady has sent his way. Olson scraped, primed and repainted the sign’s iron framework and carved a new wooden sign to place inside. He also replaced the missing pineapple-shaped decorative elements at the bottom of the sign frame. Olson's family-owned business has been in existence for 60 years and a member of the Chamber of Schenectady County for 20 years.


Details of the Silhouette
The scene at the top of the sign is a depiction of the Schenectady massacre which took place on Feb 8, 1690, and includes the following; a Dutch man, woman and child fleeing from a burning house. The home features diamond windows and a typical steep roof with Dutch stepped gable. Three armed men stand with weapons, ready to defend the settlement. In the center of the scene are four pickets of the stockade wall which surrounded the village. Outside the wall are six Indians wearing feathers in their hair and carrying knives, tomahawks, spears, and a bow with arrows. Three of the Indians are still in the canoes, two sitting, one standing. Since the attack occurred in the coldest part of the winter it is unlikely the Indians brought canoes with them all the way down from Canada, rather they most likely crossed the Mohawk River on the ice. The pine trees on the side allude to the name of Schenectady which comes from a Mohawk Indian word meaning, "beyond the pine plain", or Schenectady's location at the edge of "The Woesinta", i.e The Wilderness.

Also see . . .  The Schenectady Massacre. "Robert Livingston (1654-1728) offers a vivid account of an attack by the French and their Indian allies on the Dutch and English settlement at Schenectady in New York on February 8 and 9, 1690." (Submitted on January 2, 2009, by Kevin W. of Stafford, Virginia.) 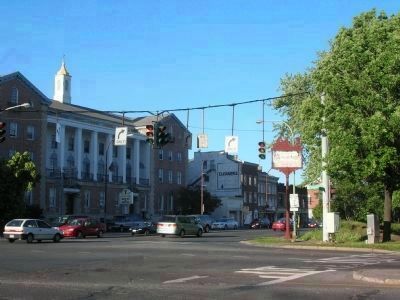 Photographed By Howard C. Ohlhous, May 28, 2008
3. Schenectady Marker
Schenectady's Chamber of Commerce sign at the corner of Washington Avenue (foreground), and State Street/Route 5 (on the left). Liberty Park is on the right. The WMCA is the building across the street with the cupola.

Photographed By Howard C. Ohlhous, May 28, 2009
4. Schenectady Marker Detail
The silhouette at the top of the marker depicts the Schenectady Massacre of 1690. 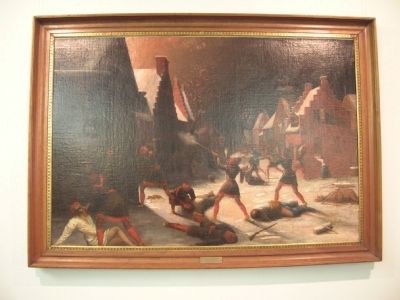 Photographed By Howard C. Ohlhous, November 15, 2008
5. Schenectady Massacre Painting
This painting of the Schenectady Massacre hangs in the Schenectady County Historical Society. One inaccuracy in the painting is the Indians depicted wearing short tunics without trousers, which would have been very uncomfortable during the chilly February weather. In the bloody massacre houses and barns were torched and men, women and children were slaughtered. Many were in night clothing and had no time to arm themselves. By the morning of February 9, the thriving community lay in ruins — more than 60 buildings were burned and residents were dead, taken prisoner, or fled as refugees to the safety of the fort at Albany. 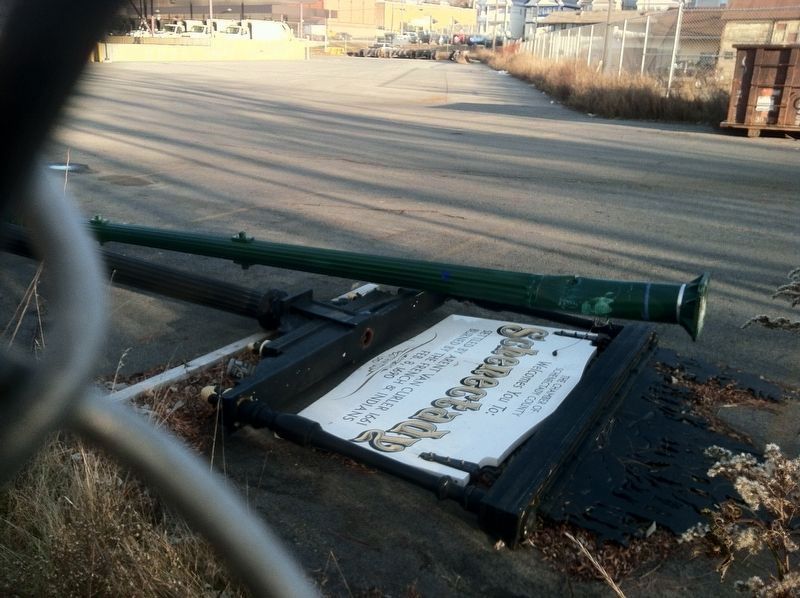 Photographed By Howard C. Ohlhous, December 21, 2017
6. "Welcome to Schenectady" Sign in Storage
The "Welcome to Schenectady" sign is seen in storage in the back lot of the City of Schenectady Public Works on Foster Ave and Seneca Street. In 2017 work was begun on the redeveloping of Liberty Park into a green space that will become Gateway Plaza, thanks to a nearly $1 million FEMA grant. Presumable the sign will be returned to the park as a finishing touch on the project. 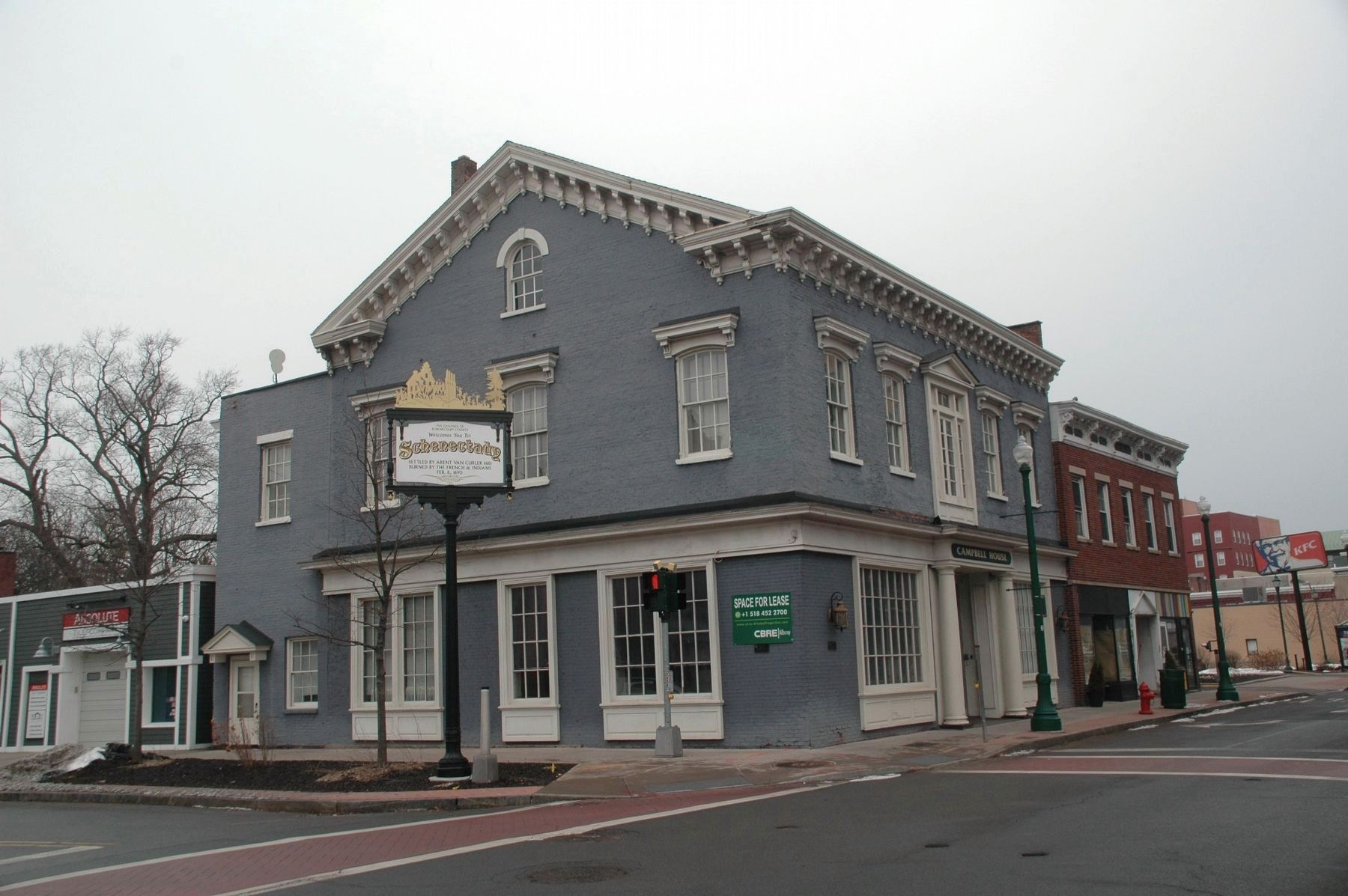