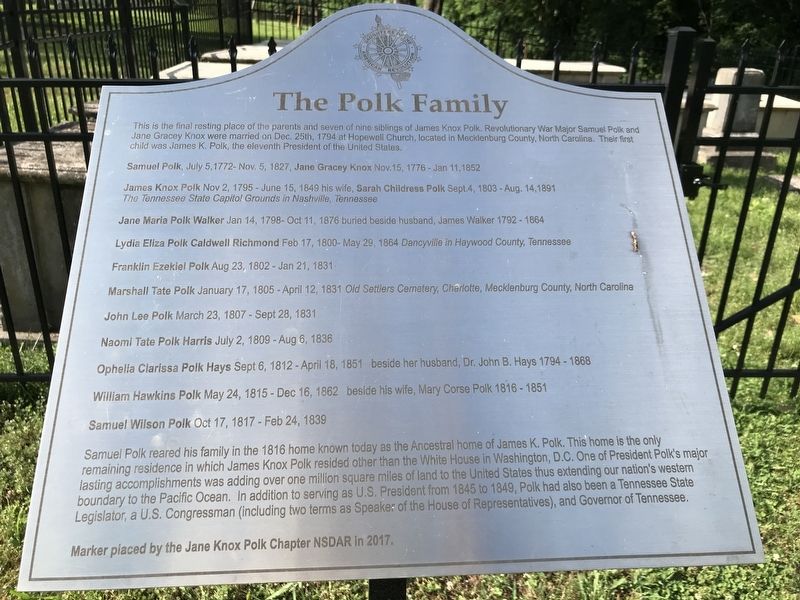 This is the final resting place of the parents and seven of nine siblings of James Knox Polk. Revolutionary War Major Samuel Polk and Jane Gracey Knox were married on Dec. 25th, 1794 at Hopewell Church, located in Mecklenburg County, North Carolina. Their first child was James K. Polk, the eleventh President of the United States. 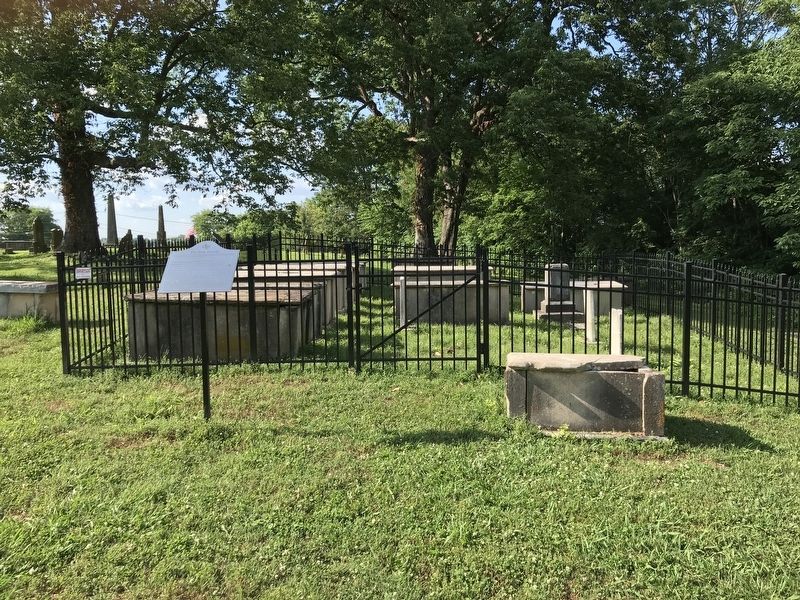 Samuel Polk reared his family in the 1816 home known today as the Ancestral home of James K. Polk. This home is the only remaining residence in which James Knox Polk resided other than the White House in Washington, D.C. One of President Polk's major lasting accomplishments was adding over one million square miles of land to the United States thus extending our nation's western boundary to the Pacific Ocean. In addition to serving as U.S. President from 1845 to 1849, Polk had also been a Tennessee State Legislator, a U.S. Congressman (including two terms as Speaker of the House of Representatives), and Governor of Tennessee.

Erected 2017 by Jane Knox Polk Chapter, National Society of the Daughters of the American Revolution.

Topics and series. This historical marker is listed in this topic list: Cemeteries & Burial Sites. In addition, it is included in the Daughters of the American Revolution, and the Former U.S. Presidents: #11 James K. Polk series lists.

Location. 35° 37.151′ N, 87° 2.021′ W. Marker is in Columbia, Tennessee, in Maury County. Marker can be reached from the intersection of West 4th Street and North Main Street. The marker is located in Greenwood Cemetery. Touch for map. Marker is in this post office area: Columbia TN 38401, United States of America. Touch for directions.

Other nearby markers. At least 8 other markers are within walking distance of this marker. Jane Knox Polk Chapter (here, next to this marker); Camille Leonie Herndon (a few steps from this marker); Greenwood (within shouting distance of this marker); Saint Paul African Methodist Episcopal Church (approx. 0.2 miles away); Freedmen's Savings Bank and Trust Company (approx. 0.2 miles away); Nelson House Hotel (approx. ¼ mile away); Bethel House Hotel (approx. 0.3 miles away); The Princess Theatre (approx. 0.3 miles away). Touch for a list and map of all markers in Columbia.
Credits. This page was last revised on June 10, 2020. It was originally submitted on June 10, 2020, by Duane Marsteller of Murfreesboro, Tennessee. This page has been viewed 51 times since then. Photos:   1, 2. submitted on June 10, 2020, by Duane Marsteller of Murfreesboro, Tennessee. • J. Makali Bruton was the editor who published this page.
Share This Page.