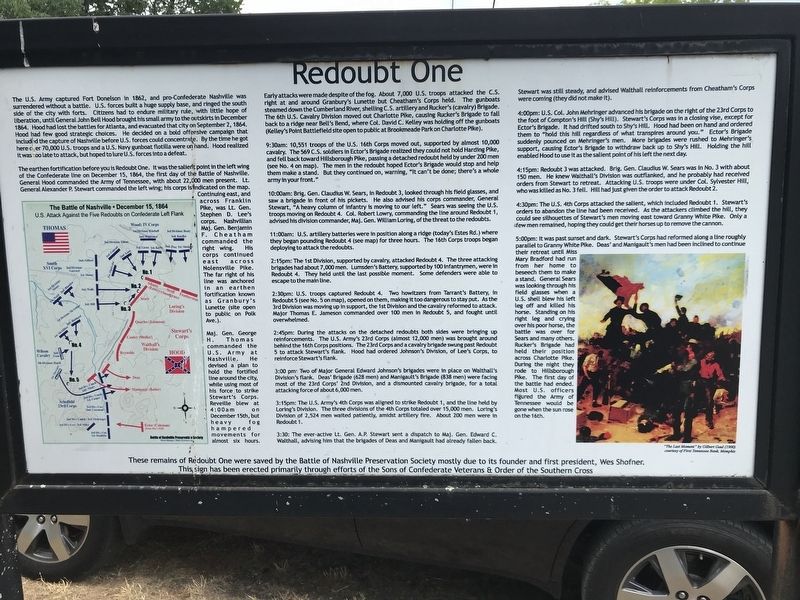 The U.S. Army captured Fort Donelson in 1862, and pro-Confederate Nashville was surrendered without a battle. U.S. forces built a huge supply base, and ringed the south side of the city with forts. Citizens had to endure military rule, with little hope of liberation, until General John Bell Hood brought his small army to the outskirts in December 1864. Hood had lost the battles for Atlanta, and evacuated that city on September 2, 1864. Hood had few good strategic choices. He decided on a bold offensive campaign that included the capture of Nashville before U.S. forces could concentrate. By the time he got here over 70,000 U.S. troops and a U.S. Navy gunboat flotilla were on hand. Hood realized it was too late to attack, but hoped to lure U.S. forces into a defeat.

The earthen fortification before you is Redoubt One. It was the salient point in the left wing of the Confederate line on December 15, 1864, the first day of the Battle of Nashville. General Hood commanded the Army of Tennessee, with about 22,000 men present. Lt. General Alexander P. Stewart commanded the left wing; his corps is indicated on the map. Continuing east, and 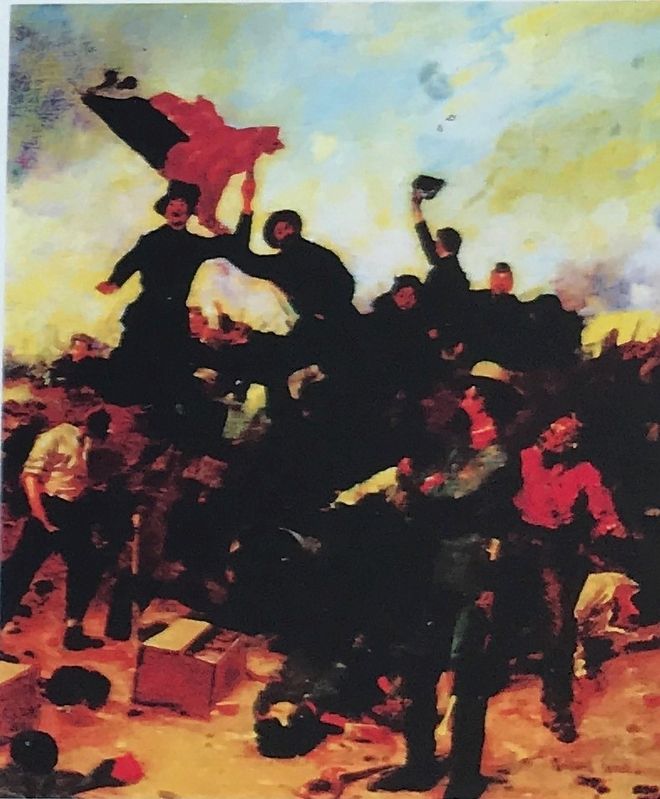 Maj. Gen. George H. Thomas commanded the U.S. Army at Nashville. He devised a plan to hold the fortified line around the city, while using most of his force to strike Stewart's corps. Reveille blew at 4:00 am on December 15th, but heavy fog hampered movements for almost six hours.

Early attacks were made despite the fog. About 7,000 U.S. troops attacked the C.S. right at and around Granbury's Lunette but Cheatham's corps held. The gunboats steamed down the Cumberland River, shelling C.S. artillery and Rucker's (cavalry) Brigade. The 6th U.S. Cavalry Division moved out Charlotte Pike, causing Rucker's Brigade to fall back to a bridge near Bell's Bend, where Col. David C. Kelley was holding off the gunboats (Kelley's Point Battlefield site open to the public at Brookmeade Park on Charlotte Pike).

9:30am: 10,551 troops of the U.S. 16th Corps moved out, supported by almost 10,000 cavalry. The 569 C.S. soldiers in Ector's Brigade realized they could not hold Harding Pike, and fell back toward Hillsborough Pike, passing a detached redoubt held by under 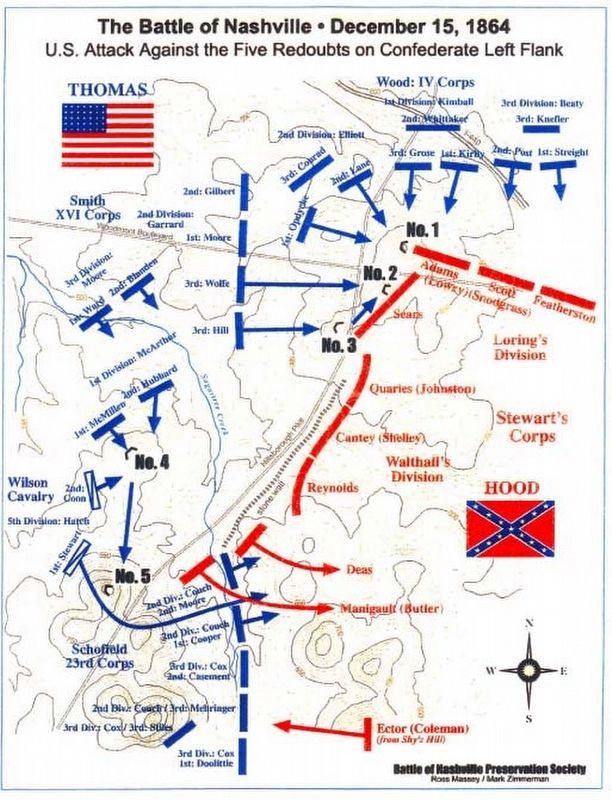 Photographed By Battle of Nashville Trust
3. Redoubt One Marker detail
Battlefield map from the marker.
200 men (see No. 4 on map). The men in the redoubt hoped Ector's Brigade would stop and help them make a stand. But they continued on, warning “It can't be done; there's a whole army in your front.”

10:00am: Brig. Gen. Claudius W. Sears, in Redoubt 3, looked through his field glasses, and saw a brigade in front of his pickets. He also advised his corps commander, General Stewart, “a heavy column of infantry is moving to our left.” Sears was seeing the U.S. troops moving on Redoubt 4. Col. Robert Lowry, commanding the line around Redoubt 1, advised his division commander, Maj. Gen. William Loring, of the threat to the redoubts.

11:00am: U.S. artillery batteries were in position along a ridge (today's Estes Rd.) where they began pounding Redoubt 4 (see map) for three hours. The 16th Corps troops began deploying to attack the redoubts.

2:15pm: The 1st Division, supported by cavalry, attacked Redoubt 4. The three attacking brigades had about 7,000 men. Lumsden's Battery, supported by 100 infantrymen, were in Redoubt 4. They held until the last possible moment. Some defenders were able to escape to the main line.

2:30pm: U.S. troops captured Redoubt 4. Two howitzers from Tarrant's Battery, in Redoubt 5 (see No. 5 on map), opened on them, making it too dangerous to stay put. As the 3rd Division was moving up in support, 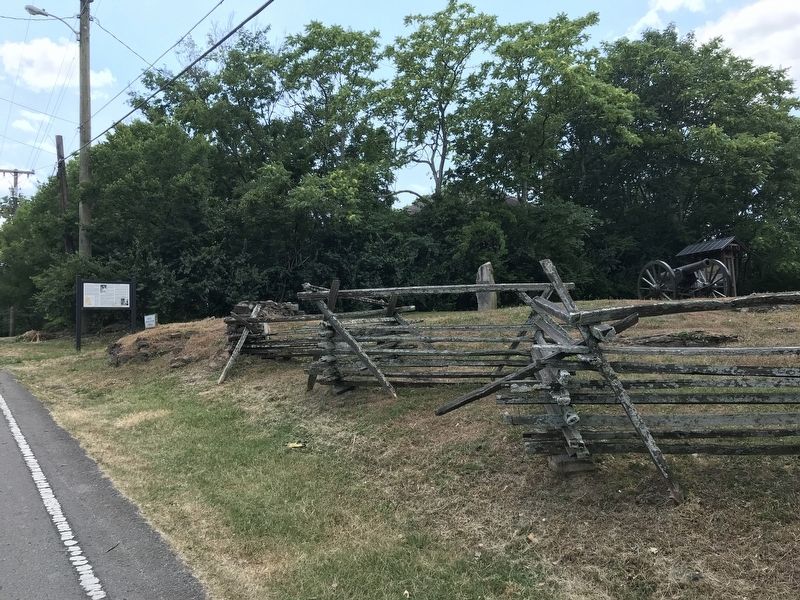 Photographed By Duane and Tracy Marsteller, June 20, 2020
4. Redoubt One Marker
the 1st Division and the cavalry reformed to attack. Major Thomas E. Jameson commanded over 100 men in Redoubt 5, and fought until overwhelmed.

2:45pm: During the attacks on the detached redoubts both sides were bringing up reinforcements. The U.S. Army's 23rd Corps (almost 12,000 men) was brought around behind the 16th Corps positions. The 23rd Corps and a cavalry brigade swung past Redoubt 5 to attack Stewart's flank. Hood had ordered Johnson's Division, of Lee's Corps, to reinforce Stewart's flank.

3:00 pm: Two of Major General Edward Johnson's brigades were in place on Walthall's Division's flank. Deas' Brigade (628 men) and Manigault's Brigade (838 men) were facing most of the 23rd Corps' 2nd division, and a dismounted cavalry brigade, for a total attacking force of about 6,000 men.

3:15 pm: The U.S. Army's 4th Corps was aligned to strike Redoubt 1, and the line held by Loring's Division. The three divisions of the 4th Corps totaled over 15,000 men. Loring's Division of 2,524 men waited patiently, amidst artillery fire. About 200 men were in Redoubt 1.

3:30: The ever-active Lt. Gen. A. P. Stewart sent a dispatch to Maj. Gen. Edward Walthall, advising him that the brigades of Deas and Manigault had already fallen back. Stewart was still steady, and advised Walthall reinforcements from Cheatham's Corps were coming (they did not make 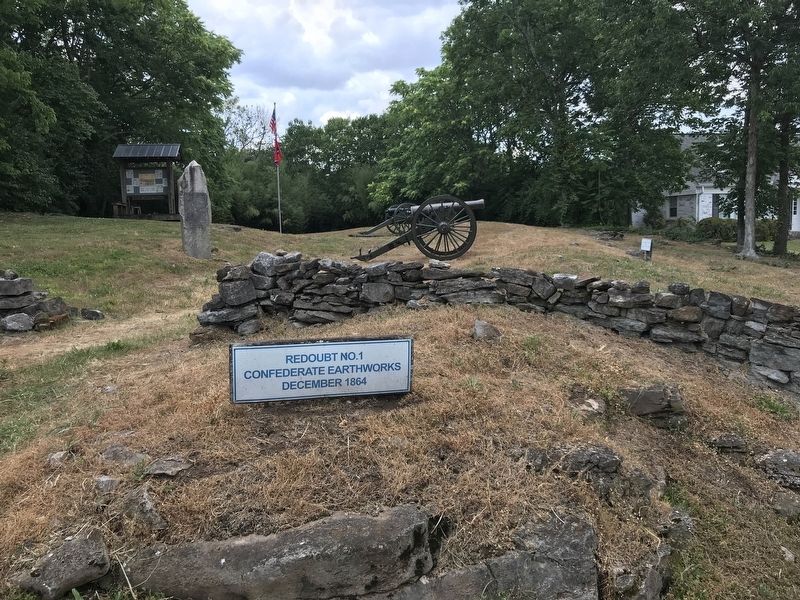 4:00pm: U.S. Col. John Mehringer advanced his brigade on the right of the 23rd Corps to the foot of Compton's Hill (Shy's Hill). Stewart's Corps was in a closing vise, except for Ector's Brigade. It had drifted south to Shy's Hill. Hood had been on hand and ordered them to “hold this hill regardless of what transpires around you.” Ector's Brigade suddenly pounced on Mehringer's men. More brigades were rushed to Mehringer's support, causing Ector's Brigade to withdraw back up to Shy's Hill. Holding the hill enabled Hood to use it as the salient point of his left the next day.

4:15pm: Redoubt 3 was attacked. Brig. Gen. Claudius W. Sears was in No. 3 with about 150 men. He knew Waltall's Division was outflanked, and he probably had received orders from Stewart to retreat. Attacking U.S. troops were under Col. Sylvester Hill, who was killed as No. 3 fell. Hill had just given the order to attack Redoubt 2.

4:30pm: The U.S. 4th Corps attacked the salient, which included Redoubt 1. Stewart's orders to abandon the line had been received. As the attackers climbed the hill, they could see silhouettes of Stewart's men moving east toward Granny White Pike. Only a few men remained, hoping they could get their horses up to remove the cannon.

5:00pm: It was past sunset and dark. Stewart's Corps had reformed along a line roughly parallel to Granny White Pike. Deas' and Manigault's men had been inclined to continue their retreat until Miss Mary Bradford had run from her home to beseech them to make a stand. General Sears was looking through his field glasses when a U.S. shell blew his left leg off and killed his horse. Standing on his right leg and crying over his poor horse, the battle was over for Sears and many others. Rucker's Brigade had held their position across Charlotte Pike. During the night they rode to Hillsborough Pike. The first day of the battle had ended. Most U.S. officers figured the Army of Tennessee would be gone when the sun rose on the 16th.

These remains of Redoubt One were saved by the Battle of Nashville Preservation Society mostly due to its founder and first president, Wes Shofner. This sign has been erected primarily through the efforts of the Sons of Confederate Veterans & Order of the Southern Cross

Erected by Sons of Confederate Veterans & Order of the Southern Cross.

Topics. This historical marker is listed in this topic list: War, US Civil. A significant historical date for this entry is December 15, 1864.