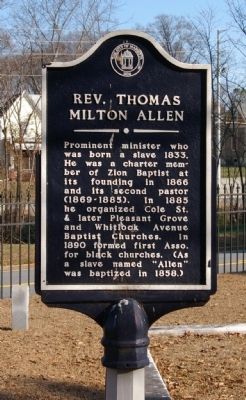 Photographed By David Seibert, December 25, 2008
1. Rev. Thomas Milton Allen Marker
Inscription.
Rev. Thomas Milton Allen. . Prominent minister who was born a slave 1833. He was a charter member of Zion Baptist at its founding in 1866 and its second pastor (1869-1885). In 1885 he organized Cole St. and later Pleasant Grove and Whitlock Avenue Baptist Churches. In 1890 formed first Asso. for black churches. (As a slave named "Allen" was baptized in 1858.) . This historical marker was erected by The City of Marietta. It is in Marietta in Cobb County Georgia

Erected by The City of Marietta.

Topics. This historical marker is listed in these topic lists: African Americans • Cemeteries & Burial Sites • Churches & Religion. A significant historical year for this entry is 1833.

Location. 33° 56.712′ N, 84° 32.864′ W. Marker is in Marietta, Georgia, in Cobb County. Marker is on West Atlanta Road SE, 0.2 miles north of Cemetery Street SE, on the left when traveling north. The marker is located in the Old Marietta City Cemetery, in the northeastern section. Touch for map. Marker is in this post office area: Marietta GA 30060, United States of America. Touch for directions. 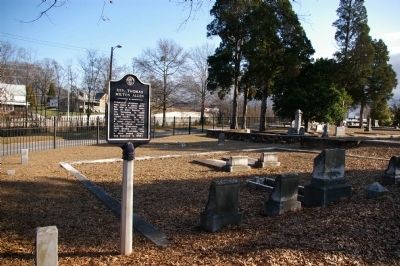