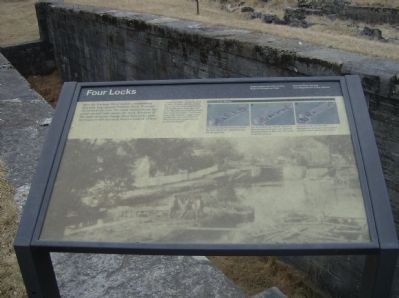 Photographed By Robert H. Moore, II, January 10, 2009
1. Close-up of Four Locks Marker
Inscription.
Four Locks. Chesapeake and Ohio Canal National Historical Park. , Here the Potomac River makes a meandering four-mile loop around Prather’s Neck. To avoid the bend in the river, the canal engineers cut the canal one-half mile across the neck. Because of the rapid elevation change, these four locks were necessary to lift the canal boats a total of 33 feet., [Sidebar:] , A small but busy community grew up here. Children dallied on their way to the one-room schoolhouse still standing just down the road. In the barn just ahead mules rested after long canal miles. Canal boats loaded and unloaded cargo at the warehouses at Locks 49 and 50. Other boats were repaired at the dry dock at Lock 47. . This historical marker was erected by v. It is in Big Pool in Washington County Maryland

Here the Potomac River makes a meandering four-mile loop around Prather’s Neck. To avoid the bend in the river, the canal engineers cut the canal one-half mile across the neck. Because of the rapid elevation change, these four locks were necessary to lift the canal boats a total of 33 feet.

[Sidebar:]
A small but busy community grew up here. Children dallied on their way to the one-room schoolhouse still standing just down the road. In the barn just ahead mules rested after long canal miles. Canal boats loaded and unloaded cargo at the warehouses at Locks 49 and 50. Other boats were repaired at the dry dock at Lock 47.

Topics and series. This historical marker is listed in this topic list: Waterways & Vessels. In addition, it is included in the Chesapeake and Ohio (C&O) Canal series list. 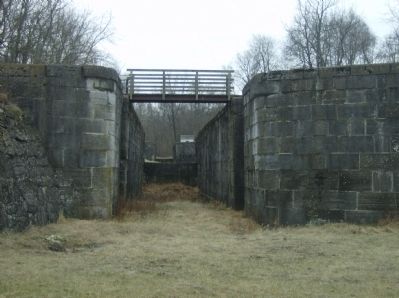 Photographed By Robert H. Moore, II, January 10, 2009
2. One of the locks at "Four Locks"
View from the canal basin looking into one of the locks.

Click or scan to see
this page online
along the Chesapeake and Ohio Canal Towpath, at mile 108.6. Touch for map. Marker is in this post office area: Big Pool MD 21711, United States of America. Touch for directions.

More about this marker. The background of the marker is a photograph of barges passing through locks on the canal, with workers looking back at the camera. In the upper right is a depiction of how the locks worked.

Additional commentary.
1. Story of a C&O boatman: Cyrus S. Moore & his boat, the G.P. Lloyd
My third great grandfather, Cyrus Saunder Moore (1829-1904) ran a flatboat, the G.P. Lloyd (named for the President of the American Co. of coal mining fame) from "Cumberland to Georgetown and Washington City," loaded with coal. He also lived in nearby Clear Spring. He purchased the boat from Mr. Henry Thomas Weld of (Mt. Savage) Alleghany for $1,530 on July 16, 1860. The amount was to be 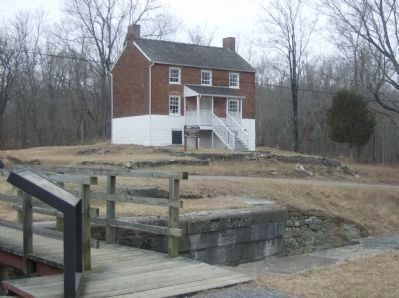 Photographed By Robert H. Moore, II, January 10, 2009
3. Remaining house from the old village
View of an old house near the Four Locks marker. Marker can be seen in the foreground.
paid in installments of $45 each for twenty trips and $35 for each subsequent trip made for the boat on the canal.

The trips were to be "in regular trips, with such expedition and regularity as can be reasonably done, and to receive the loads of the said boat promptly at each trip with the coal of such company as the said Weld shall direct; and to freight the same at the lowest current rates which sall be paid by the Cumberland Coal and Iron Company, the Borden Mining Company, and the Alleghany Mining Company..."

Furthermore, it was stated that Weld should be prepared with the coal within twenty-four hours of the boat being reported by the captain as ready to receive her load. If Weld was not ready, Cyrus has the right 'of loading wherever he chooses for that trip, providing the detention is not caused by a glub of boats in which case all must take their turn."
— Submitted January 13, 2009, by Robert H. Moore, II of Winchester, Virginia.
2. Cyrus S. Moore at Four Locks
In addition to owning a canal boat, as indicated in an earlier comment, Cyrus S. Moore also served as lead locktender at Four Locks in 1858. He likely resided at the Lock 49 Lockhouse during that time. During the actual taking of the 1860 census, he was listed as residing both at Clear Spring 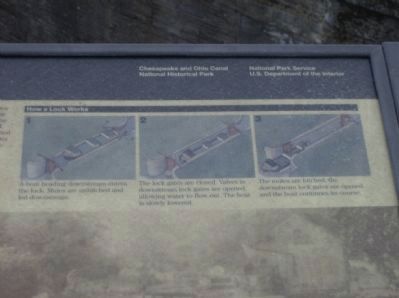 Photographed By Robert H. Moore, II, January 10, 2009
4. Close-up image of Four Locks marker
Close-up of the upper right-hand corner of the marker showing operation of the locks in order to lower the boats for continiued passage along the canal. Caption text (left to right): Image 1: “A boat heading downstream enters the lock. Mules are unhitched and led downstream.” Image 2: “The lock gates are closed. Valves in downstream lock gates are opened allowing water to flow out. The boat is slowly lowered.” Image 3: “The mules are hitched, the downstream lock gates are opened, and the boat continues its course.”
and here, at Four Locks. Later in the year, he sold his Clear Spring property and moved his family to Four Locks. The family resided here until, probably, 1869, when they relocated to Martinsburg, West Virginia, where Cyrus served as a railroad conductor and, later, a hotel keeper.
— Submitted October 28, 2009, by Robert H. Moore, II of Winchester, Virginia. 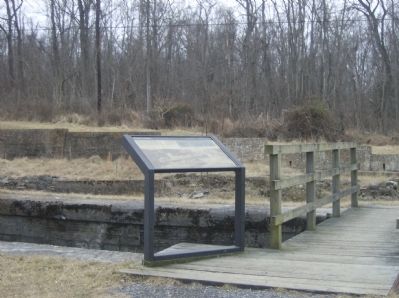 Photographed By Robert H. Moore, II, January 10, 2009
5. Four Locks Marker
Looking northwest, this is another view of the Four Locks marker with the footbridge to the right of the marker. 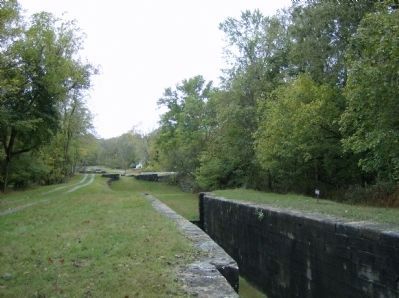 Photographed By Robert H. Moore, II, October 18, 2009
6. View from Lock #47
Four Locks is a series of four canal locks. This image is of Lock #47, looking west (the journey from Georgetown and Washington, D.C. to Cumberland, Maryland). A much more shallow Lock #48 can be seen just beyond this view. 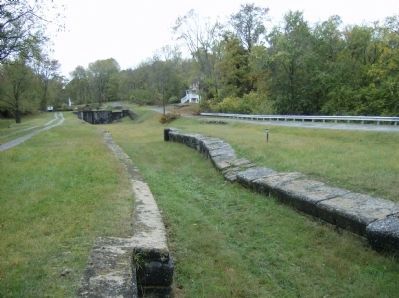 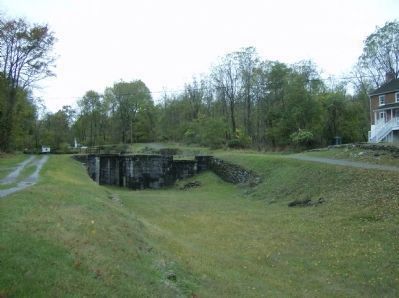 Photographed By Robert H. Moore, II, October 18, 2009
8. View entering Lock #49
This is a view looking at the entrance of Lock #49, heading west. The locktender's house can be seen to the right, but on the far right are the remains of a warehouse. Originally built by Denton Jacques ca. 1863, the concrete remains of the foundation are not of the original warehouse but of one built on the site in the early 20th century. 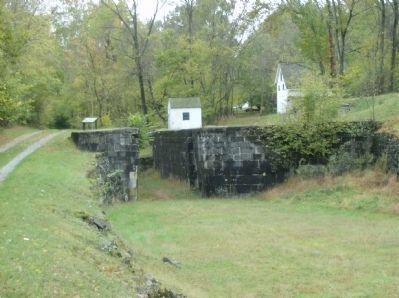 Photographed By Robert H. Moore, II, October 18, 2009
9. View of the entrance to Lock #50
This view is of the entrance (looking west) to Lock #50. An early 20th century locktender's shelter (rebuilt) is seen at the end of the lock, while a rebuilt mule shed is seen off to the right. 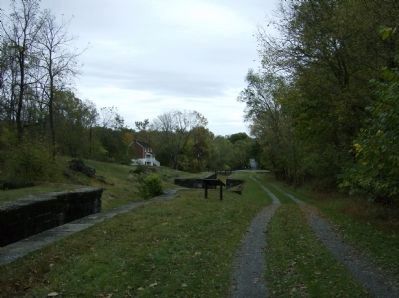 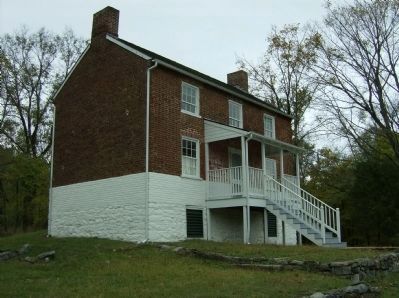 Photographed By Robert H. Moore, II, October 18, 2009
11. Lockhouse #49
The lead locktender for Four Locks (Lock #47, 48, 49, and 50) resided in this ca. 1840 house. In the early years of the canal, through the Civil War, pay for lead locktenders was poor. To better provide for themselves and supplement their income, there were allowed to farm on an adjoining parcel (one acre) of land. Locktenders and their families supplemented their income with sales (to boat captains and their families) produce from the gardens as well as baked goods. 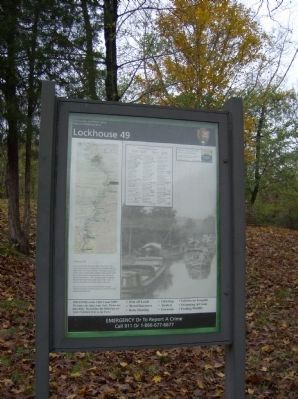 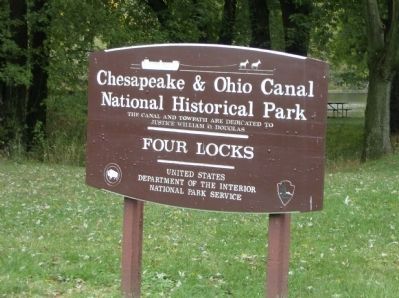 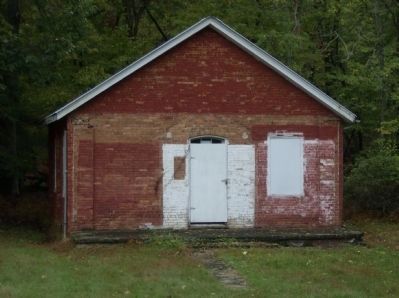 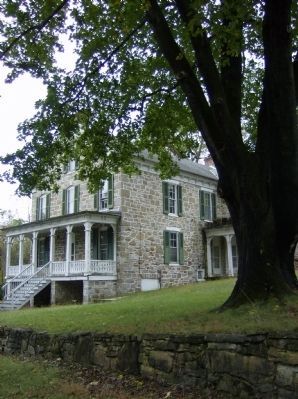 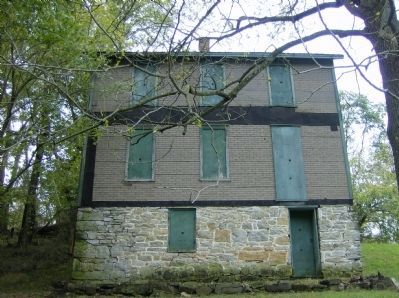 Photographed By Robert H. Moore, II, October 18, 2009
16. Home (ca. 1880) of Major Alexander M. Flory at Four Locks
This is the post-Civil War home of Major Alexander M. Flory. Flory was a member of the 1st Potomac Home Brigade Cavalry, also known as "Cole's Cavalry." Flory began his military service as a member of Company B of that unit, which was originally organized at nearby Clear Spring in August 1861. 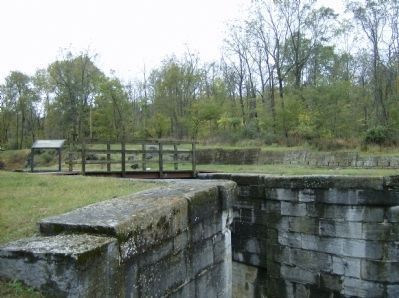 Photographed By Robert H. Moore, II, October 18, 2009
17. View from south-side of Lock #49 with the remains of a warehouse in the background
The Denton Jacques warehouse was here, at Lock #49, as early as 1863. It is uncertain whether this warehouse was one of the victims of the Confederate raid that moved through here, en route to Chambersburg, Pa., on July 27, 1864. However, Jacques' store and one owned by Prather were burned by the Confederates on that day, here at Four Locks. Also while here on that day, word was received that Pennsylvania militia was moving to intercept the Confederate force. Confederate forces moved from this point to gain the upper hand, and forced the militia back into Pennsylvania with relative ease. 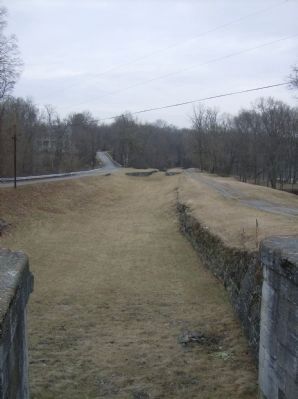